Ada Nilsson was one of the first female doctors in Sweden. She was also a peace activist and publisher of the Fogelstad Group journal Tidevarvet. She was also a driving force behind several societies which were active on behalf of women’s rights, peace, and democracy.

Ada Nilsson was born at Toarp farmhouse in Västergötland in 1872. Her father was the middleman for the textile cottage industry. Following the death of her father, when Ada Nilsson was just 13 years old, her guardian sent her to Stockholm where she attended the Lyceum school for girls. She gained her school-leaving certificate as a private student in 1891. That year she began a preparatory year of study to allow her to read medicine at Uppsala. She became acquainted with Lydia Wahlström. The latter – along with several women who went on to become pioneers within a variety of professions – had just set up Uppsala Kvinnliga Studentförening (Uppsala female students’ association). Ada Nilsson also came to know Alma Sundqvist, who became a lifelong friend and colleague once they had completed further studies at Karolinska Institutet in Stockholm.

In 1900 both women gained their medical licentiates, but at this point in time women were not allowed to hold state posts, which meant that Ada Nilsson and Alma Sundqvist could not work at state hospitals. Thus Ada Nilsson opted, following further studies in Germany, to specialise in gynaecology and later set up her own private surgery. In 1904, after having undertaken specialist employment at various polyclinics in Stockholm, she opened her first surgery at St. Paulsgatan in Stockholm. For several years she also served as the director of the Serafimerlasarettet gynaecological polyclinic, whilst also working as a doctor at orphanages and girls’ schools.

In 1912 Ada Nilsson moved to Triewaldsgränd 2 in Gamla stan (the old town of Stockholm) and she opened a new surgery there. The radical women and men of her day would meet at her home. A number of societies were established and run from her house, where women in need were also always welcome. Ada Nilsson had already been involved in setting up Kvinnornas diskussionsklubb (women’s discussion club) in 1907 and in 1909 she and Alma Sundqvist had established Föreningen Självförsörjande Bildade Kvinnors (society for self-sufficient educated women’s) rest home. The two women were also active within Svenska föreningen för moderskydd och sexualreform (Swedish society for the protection of mothers and sexual reform) (see Frida Stéenhoff). They, along with Karolina Widerström, campaigned for their own professional rights in part by setting up the Kvinnliga Läkares Kommitté (female doctors’ committee) in 1916 (later known as Kvinnliga Läkares Förening). Ada Nilsson's and Alma Sundqvist’s experiences as doctors led them to become heavily involved in the fight against what was then legalised prostitution. They highlighted the need for sexual education and asserted women’s rights to abortion. They both published pamphlets focusing on these issues. They also gave talks throughout the country.

Following the ‘borggårdskris’ (courtyard crisis between the Swedish king and the prime minister) of 1914 and the ensuing heated national political tensions, which resulted in the resignation of prime minister Karl Staaff, Ada Nilsson and her colleague Julia Kinberg gathered like-minded people at a meeting at which Föreningen frisinnade kvinnor (society of liberal women) was set up “in opposition to war psychosis, in support of democracy and equality for women”. Following changes to the basic law regarding general suffrage during the 1918–1921 period, Föreningen frisinnade kvinnor was transformed into a national organisation.

In 1922 Elisabeth Tamm – one of the first five women to serve in parliament – held a meeting with her parliamentary colleague Kerstin Hesselgren, the author Elin Wägner, the pedagogue Honorine Hermelin, and Ada Nilsson at her Fogelstad property in order to plan what then became Kvinnliga medborgarskolan vid Fogelstad (the female citizens' school). It was then that Ada Nilsson and Honorine Hermelin developed their life-long companionship. The following year the group set up its own journal, called Tidevarvet, for which Ada Nilsson was the publisher and main financier, whilst Elin Wägner served as its editor for the first few years. Tidevarvet ran from 1923–1936 and was a radical political weekly which dealt with social issues such as peace and pacifism, women’s rights, and improving conditions for mothers and children. In 1925 Ada Nilsson also opened Tidevarvets Rådgivningsbyrå för föräldrar (Tidevarvet advice bureau for parents), but this enterprise had to close after three years due to a lack of finances and municipal support.

In 1931 Ada Nilsson became the chair of Radikala Föreningen (radical society), once Frisinnade Kvinnors Riksförbund had been expanded and reformed as an umbrella organisation called Svenska Kvinnors Vänsterförbund (Swedish women’s left-wing federation). Ada Nilsson and this organisation were heavily involved in supporting Spanish women during the civil war there, and undertook extensive efforts on behalf of refugees across Europe during the ensuing period of global war.

Ada Nilsson never joined a particular political party. As a liberal she wanted to remain unbound and be able to work across all barriers on behalf of peace and improved conditions for women and children. Many of her proposals for reforms for mothers and childcare were taken on by Befolkningskommissionen (citizens’ commission) set up by the Social Democratic party and put into practise through the emerging welfare state. Ada Nilsson never joined the Social Democratic party, however. She was not a communist, either, despite sometimes being accused of such due to her close friendship with the Russian ambassador Aleksandra Kollontaj, whom she had come to know when she arrived in Sweden in the early 1930s.

Ada Nilsson carried on serving as deputy chair of Svenska Kvinnors Vänsterförbund until 1950. At that point she rapidly began to lose her sight and in 1953 she closed her medical surgery in Gamla stan. She spent the years leading up to her death in 1964 living in poverty with Honorine Hermelin at Fogelstad. Ada Nilsson is buried at the Södra Säm cemetery in Västergötland.

Ada Nilsson and her peace-activist colleagues were immortalised in Siri Derkert’s artwork at the Östermalmstorg subway station in Stockholm. 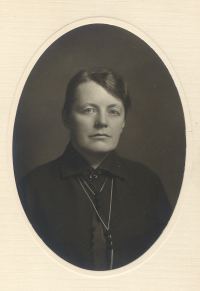