Why is so little known of female artists, scientists, politicians, and so forth? This is one of the first questions which arises whenever any kind of history is about to be written. One of the reasons for this is that historiography relies on existing biographical dictionaries, most of which contain very few entries for women. The Biographical Dictionary of Swedish Women (SKBL) resolves this dilemma by providing free (CC-BY licensed) access to 2000 biographies of women who actively contributed to Swedish society.

The images used in SKBL come from museums, archives and private collections. SKBL does not own any of the images and therefore cannot give permission for them to be reproduced.

Read up on contents and selection

SKBL is produced by the University of Gothenburg. The articles are written by experts and researchers, whilst the work has been financed by Riksbankens Jubileumsfond. The dictionary contains biographies of women who, across several centuries and in many different ways, have contributed to society’s development, both within Sweden and beyond. The entries, based on a mix of existing and brand-new research, were mainly selected with an emphasis on societal significance rather than personal fame. The selection includes female pioneers and women who fought for gender equality as well as historically significant women. Finnish women are also included for the pre-1809 era.

Read more on the SKBL project

The project leaders are Lisbeth Larsson and Maria Sjöberg. The editorial board comprises Berith Backlund, Linus Karlsson, Ulrika Lagerlöf Nilsson, Cecilia Pettersson, Scharolta Siencnik, and Linnea Åshede. The dictionary entries were written by experts and researchers (listed under the entry for ʻArticle authors’) and translated into English by Alexia Grosjean. The database was developed by Språkbanken and is managed by Swe-Clarin. The database and the dictionary form part of KvinnSam – the National Resource Library for Gender Studies at the University of Gothenburg.

If you are looking for a particular woman you can select either Women A-Z or the search box. Each article comprises a biography focusing on the subject’s activities and their wider significance, along with biographical information on the subject’s background, education, activities and occupations, club and organisational memberships, networks and awards. The articles also supply references and information on archival and public memorials.

The free-text search box, which calls up the biographies, can be combined with searches in the fields labelled activities, organisations, placenames and keywords.

You can increase the number of hits and include all forms of a search term by using the asterisk *. Searching for artist* will call up artist, artists, artistry etc.

See which activities the women engaged in and which professions they entered.

See which organisations the women were members of and active in. Get an insight into their networks and shared activities as well as their extent. Selecting a particular organisation name will reveal which women were involved in it.

See where the women were active: their birth places, employment locations, and places of death. Selecting a placename reveals which women were born, worked, or died there.

This lists the keywords used to describe the material. They include dates, jobs, placenames, religion, and much more. Selecting a keyword reveals all the women who fit into that descriptor.

This lists all those who have contributed an article to SKBL.

Further information on the selection process and methodology

The catalyst behind SKBL is the relative invisibility of women’s contributions to society through the ages. The gender bias of much written history can be partly attributed to archival criteria used in material preservation and classification. However, it is also a result of historical circumstances: women have for various reasons been subordinate to men for several centuries, even into the present day. Special efforts are required to rectify the misleading impression given by written histories. SKBL has therefore created a database to collate and present information on women’s achievements through the ages in an accessible format. This creates a new starting point for future historical research whilst also providing a more balanced and fair image of Swedish history.

SKBL contains the life histories of historical women who have contributed to societal developments in many ways. The project used the following criteria to select the initial candidates for inclusion:

By searching earlier biographical works and research literature the project group identified about 3,000 women who fulfil some of these criteria. Subsequently checks were made to evaluate whether enough documentation existed to generate a biographical article. This process reduced the number of potential entries by 1,000. Those who left significant personal archives, such as artists and authors, formed a majority of the remaining candidates. Similarly, women who were active within areas which have been heavily researched – such as the suffrage movement – also form a significant group.

The third stage involved finding authors, largely from within the academic sphere, but also from amongst museum staff, librarians, and other cultural institutions, as well as amongst hobby researchers, who had already researched particular women. What they all have in common is a special knowledge of the person they are writing about. Most requests for article contributions were favourably received, but availability and willingness sometimes determined the final outcome.

This first selection of women’s biographies is thus not comprehensive. The majority of women’s societal contributions will remain invisible as they have not been documented. The extant contents of archival collections resulted in the dictionary and the database being heavily weighted in favour of women who lived in the 1800s and 1900s. Women who represented earlier time periods are overwhelmingly dominated by noble and royal personages, whilst the later time periods are also highly represented by the upper echelons of society. Women from these social strata tended to have better opportunities to leave an imprint on the archives.

Each biography consists of two parts. One contains biographical information collated within clickable and searchable links. The other contains the life history along with searchable keywords, as well as an image in most cases. All the material has been manually input into the database.

In addition to the form for biographical data which all article authors were required to complete (origins, activities, education, important contacts, organisational memberships, residence locations, marriage(s), children, awards) including their references, the authors have supplied a summarised biography (1,000-10,000 characters in length) focusing on a given woman’s activities. The project group has edited the articles in order to create a certain uniformity without removing the individual author’s style. The authors were encouraged to proof their articles. The project group has also checked the spelling of all institutional names, organisational names, etc. so that they correspond with Nationalencyklopedien and that references correspond to LIBRIS. Personal information has also been corroborated and, if necessary, added to with the help of SCB’s census accounts and existing church records at parish level.

As the work has progressed it has become increasingly clear that the biographical data collated by the project group forms an essential element of how SKBL will be used by researchers. In addition to free text searches, various social circumstances can be combined and searched on. This will have an exponential impact on what it is possible to know about the different women in the dictionary, and by extension, about women’s history in general.

In summary, the life histories contained in the database do not form a comprehensive map of women’s history in Sweden from the Middle Ages to the present. However, they are a start. 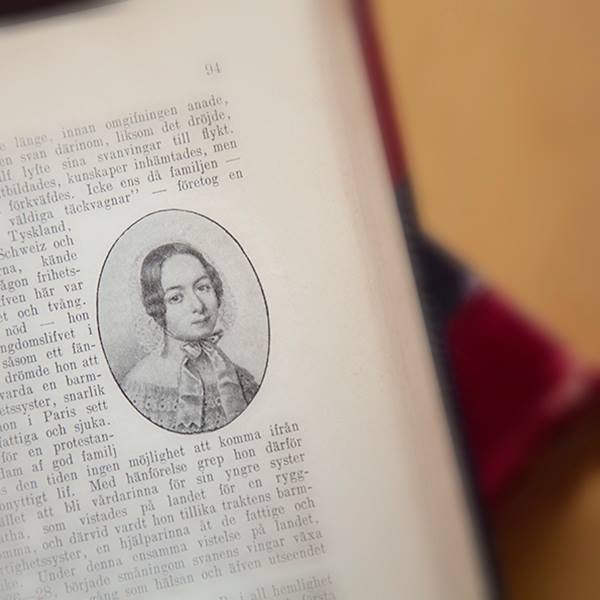