Aina Elvius was Sweden’s first female professor of astronomy. She is considered to be a pioneer within the field of studies of galaxies in polarised light. She was one of the first to use computers within Swedish astronomy.

Aina Elvius was born in Södermalm, Stockholm on 26 June 1917. She was the daughter of director Axel Eriksson and Sigrid Eriksson née Wiman. The family also included her brothers Rolf and Arne. Aina Elvius attended the girls’ school Högre allmänna läroverket för flickor in Norrmalm, Stockholm where she gained her school-leaving certificate in 1937. In the autumn term of 1937 she began to study mathematics, physics, and chemistry at Stockholm college. Whilst there she met Tord Elvius and they married in 1940. Tord Elvius was studying astronomy and in 1938 he became employed as an assistant at the Stockholm observatory in Saltsjöbaden, which made him eligible for a residence within the main observatory building. Aina Elvius also studied astronomy and so the newlyweds moved into the observatory building together. Their son, Torbjörn, was born in 1942, followed by their daughter Margareta in 1945. Aina Elvius gained her Master’s degree in 1945 and then took a three-year break from studying, spending the academic year of 1946/1947 working as a teacher at the Saltsjöbaden coeducational school. Her second daughter Ragnhild was born in 1947. The following year, in the spring term, Aina Elvius began her research at Stockholm observatory.

Aina Elvius began to study polarised light in the galaxies. During the first half of the twentieth century it had become clear that our galaxy, the Milky Way, was just one galaxy amongst many others in a vast universe. Bertil Lindblad, the head of Stockholm observatory, was interested in the structure of the galaxies and it was his suggestion that Aina Elvius should investigate polarised starlight in a few selected galaxies. Polarisation is a property of light which cannot be picked up by the naked eye. The colour of light is determined by its wavelength whilst the light waves’ direction of oscillation determines polarisation. Unpolarised light (which includes sunlight) contains light waves which oscillates in all directions, although when reflected or refracted the light can be polarised. Measuring light polarisation can therefore provide valuable knowledge of the environments which the light has passed through and of the actual orientation of the galaxies in space, an important factor in understanding their dynamics. In the 1940s, at Saltsjöbaden, Yngve Öhman had already investigated polarisation in the light from the Andromeda galaxy.

During the 1949–1950 period Aina Elvius studied the galaxy Messier 63. In order to undertake her measurements she borrowed a polarigraph from Yngve Öhman which she mounted on the 0.6m refractor telescope at Saltsjöbaden. Her measurements revealed a dark streak of dust in the galaxy as the source of polarised light. This work became the basis of Aina Elvius’ dissertation for her licentiate, completed in June 1951. Although she had not determined the cause of the polarisation she put forward a possible mechanism for it. At the same time that Aina Elvius was studying Messier 63 astronomers in the USA discovered that starlight from the Milky Way becomes polarised when it passes through dust-rich regions of space. It was proposed that this was due to the dust between the stars becoming aligned by the Milky Way’s magnetic field. Aina Elvius was inspired by these American results and she in turn posited the possibility that dust particles in Messier 63 were oriented by that galaxy’s magnetic field.

She continued her research by studying galaxy NGC 4216. Bertil Lindblad had, from American observatories, obtained photographic plates of that galaxy which had been taken through different colour filters. Aina Elvius measured the colour distribution in NGC 4216 on these plates in order to investigate how light is diffracted by dust in the galaxy. She combined this with a theoretical study of the properties of this dust and the galaxy’s orientation in space and she then presented her findings in June 1955. Aina Elvius also studied two further spiral galaxies and found that they also emitted polarised light. Having presented these findings in February 1956 they, combined with the studies of Messier 63 and NGC 4216, all formed part of Aina Elvius’ doctoral thesis. She defended this thesis on 18 May 1956 at Stockholm college and was then appointed docent in astronomy there that same year.

Aina Elvius continued to do research as a docent at the Saltsjöbaden observatory, until she began to work with Uppsala astronomical observatory in 1958. During the late 1950s Aina Elvius studied models of galactic structure. At Saltsjöbaden Per Olof Lindblad made use of the second electronic computer in Sweden, BESK (Binär Elektronisk SekvensKalkylator), to study models of the formation of the spiral structure of galaxies. BESK was used to compute how magnetic fields in a galaxy can influence the formation of spiral structures and the findings were presented in a study Aina Elvius co-authored with Lindblad and published in 1959.

In August 1961 Aina Elvius travelled to the USA to attend the general meeting of the International Astronomical Union (IAU) in Berkeley, California. She then travelled on to the Lowell observatory in Flagstaff, Arizona, where she undertook observations of polarised light. The head of the Lowell observatory was John Scoville Hall, who was one of the pioneers of astronomical polarimetry. Aina Elvius’ work on Messier 63 from 1951 had piqued his interest and the two scientists met during the IAU’s general meeting held in Moscow in 1958. Aina Elvius’ subsequent invitation to the Lowell observatory opened up new research opportunities for the Swede and she went on to make several visits to Lowell during the 1960s and the 1970s.

In the summer of 1961 a 1.75m telescope was moved from Ohio to Lowell, for improved observing conditions. At that time this was considered to be a large telescope and Aina Elvius gained ample access to it during the January–March period of 1962 along with the use of a photoelectric polarimeter. Aina Elvius and John Scoville Hall studied the galaxy Messier 82 at Lowell and found that the light it emitted was polarised. They interpreted this to mean that Messier 82 contains a magnetic field and that the particles in the galaxy, orientated in that field and polarising the galaxy’s light, resemble the particles of the Milky Way. Aina Elvius returned several times to study Messier 82 and this became her most influential work. During these repeat visits to Lowell Aina Elvius studied other galaxies along with nebulae in the Milky Way. In many cases she found evidence of polarised light.

During the 1960s star-like objects were discovered whose spectra suggested that they might be extremely far away. These were named quasars and they appeared to radiate large amounts of energy. In 1967 Aina Elvius, whilst at Lowell, observed three quasars in polarised light and thus became one of the first Swedish astronomers to take a deeper interest in quasars. Her observations revealed that for certain quasars the direction and strength of polarisation changed over time and that this might be related to variations in these quasars’ luminosity. Round about 1970 Aina Elvius and the physicist Hannes Alfvén collaborated on theoretical studies in an attempt to explain how the quasars extracted energy. Matter and antimatter were believed to collide with the resulting energy enabling the quasar to shine brightly. The model of quasars fit with the cosmological model which Hannes Alfvén and the physicist Oskar Klein had proposed as an alternative to ‘Big Bang’ cosmology. Aina Elvius discussed this cosmology at an IAU symposium in Poland in 1973 although it has not held up following further observations and nowadays is treated as an element of curiosity.

Aina Elvius became observer at Stockholm observatory in 1968 and assistant professor in 1969. During a brief visit to Lowell in 1973 Aina Elvius observed the star MWC 349, a peculiar object embedded in gas and dust, and found that the starlight was heavily polarised. At Uppsala observatory Aina Elvius and Mona Engberg constructed their own polarimeter which was later put into use at Saltsjöbaden, including for observations of MWC 349.

Aina Elvius had plates taken using Uppsala observatory’s Schmidt telescope in Australia. On these plates she discovered a star which stood out due to its powerful irregular variations in luminosity and because its spectrum lacked hydrogen signatures. In 1976 Aina Elvius visited the La Silla observatory in Chile in order to obtain spectra of this star. The star subsequently revealed itself to belong to a class of rarely seen variable stars (AM CVn stars). Aina Elvius’ doctoral student Björn Westin named this star “AE 1” in honour of her discovery.

Aina Elvius made her last visit to Lowell in 1977 where she observed the galaxy NGC 1068 amongst other things. During the 1970s Aina Elvius increasingly took an interest in active galaxies and the changes in luminosity and spectra displayed by their nuclei. The International Ultraviolet Explorer (IUE) satellite was launched into orbit around the Earth in 1978 and Aina Elvius and her colleagues used it to study the nucleus of the active galaxy NGC 7469 in ultraviolet light.

Aina Elvius became a member of the Royal Swedish Academy of Sciences in 1975. She was appointed professor in 1979 and from 1977 until 1981 she served as ‘prefect’ (head) of Stockholm observatory. She retired in 1981 but carried on working with an international group studying active galaxies using IUE. Aina Elvius became chair of Svenska astronomiska sällskapet (Swedish astronomical society) in 1986, thereby succeeding her husband, who died in 1992.

Aina Elvius was a skilled, inquisitive, and fearless researcher. She was an outstanding observer who, during the course of her career, went from doing hour-long manual exposures of photographic plates in chilly telescope domes to using a space telescope. Throughout her career Aina Elvius regularly wrote popular science articles and gave talks to the general public. She was the first woman in Sweden to work as an astronomical researcher and to become a professor in the subject.

Aina Elvius died in Uppsala on 23 May 2019. She is buried at Uppsala old cemetery. 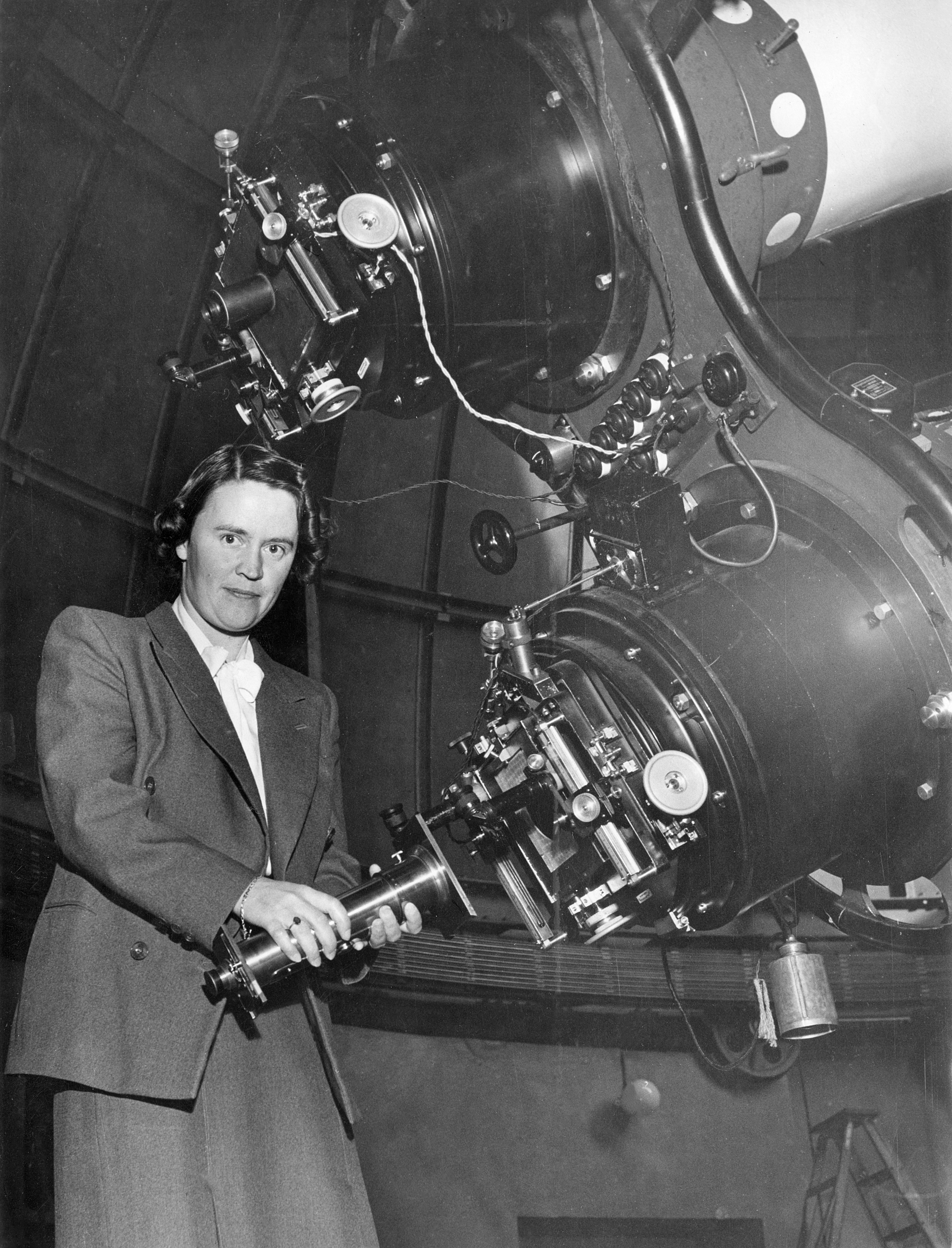