Alma Abrahamsson was the director of Förskolan för döva (the preschool for deaf children) in Gothenburg. She was also a strong advocate of Swedish Sign Language.

Alma Abrahamsson was born in Gothenburg. Her parents, Anna and Carl Abrahamsson, were both deaf and she learned Swedish Sign Language at an early age. She gained her teaching qualifications in 1926 and immediately gained employment as a teacher at Förskolan för döva in Gothenburg. She continued her studies by attending the Manilla school in Stockholm, from which she graduated as a teacher for deaf children in 1931. She became the director of Förskolan för döva in 1940 and remained at the school until she retired in 1969.

This rivalry between two methods of communication – one using your hands to speak via your own language while the other relied on lip-reading in the dominant language of the area – had been ongoing since the late 1700s. The oral method gained prevalence towards the late 1800s. Sign language was seen as too primitive a method, partly because it lacked grammar. It was also believed that sign language did not allow for abstract thought processes. At an international conference of teachers of the deaf, held in Milan in 1880, it was decided that the oral method would apply across Europe. This decision influenced deaf education in Sweden. The oral method, which had already been partly in use at the Manilla school, became the sole method of communication. It was intended to help the deaf make maximum use of whatever hearing they had. This approach was consolidated after the Second World War when technological advancements allowed for the production of improved hearing aids.

Despite the fact that Alma Abrahamsson had been trained to use the oral method at the Manilla school and had been forced to use that same method in her teaching, she stubbornly continued to be an advocate of sign language. It was said that in practice she taught using sign language and would only switch to lip-reading whenever visitors came into her classroom. She would read newspapers and stories to her students which she then had them repeat by means of performing the contents in the form of plays. She would take her students to visit farms so that they could experience the different types of manual dexterity required there.

Alma Abrahamsson was the subject of a certain amount of criticism for her views but she was also a much-loved and highly-appreciated teacher. Many of her former students have testified to how Swedish Sign Language opened a door to the wider world and enriched their imaginations.

Alma Abrahamsson was active within a range of areas: she worked as an interpreter and an organiser of courses and leisure-activities. In 1969 she established Dövas pensionärsförening (the deaf pensioners’ society). She came to serve as an ambassador for the deaf at a time when they were excluded from society. It was only towards the end of her life and even posthumously that she finally gained the recognition she was due.

Alma Abrahamsson was presented with Göteborgs Stads förtjänsttecken (The Gothenburg city merit badge) in 1965. In recognition of her many years’ worth of significant contributions on behalf of the deaf in Sweden she was posthumously awarded the Illis quorum medal. Further, she also posthumously received the Kruth medal, which is named after the carpenter Lars Kruth, a pioneer of the deaf movement in Sweden and an early champion of sign language. In 1981 the Swedish government recognised Swedish Sign Language as the mother tongue of the deaf.

Alma Abrahamsson died in 1977. She is buried at Västra kyrkogården (the Western Cemetery) in Gothenburg. 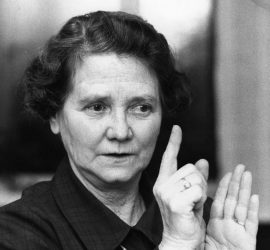