Britta Schill was a preschool teacher and principal of socialpedagogiska seminariet.

Britta Schill was born in Jönköping in 1912. She was the middle child of three sisters. In 1923 she and her family moved to Helsingborg, her mother’s hometown, following her father’s employment as an engineer in that town. Unfortunately he died suddenly that same year and six years later, in 1929, the three girls lost their mother. At this point Britta Schill was 17 years old. She then moved in with Léonie Deshayes, office-manager at Helsingborgs Gummifabriks AB (rubber factory) who lived in the same part of town, Olympia. Britta Schill remained there until she had completed her schooling at Helsingborgs flickläroverk (girls’ school). Even after she left Helsingborg Britta Schill stayed in close contact with Léonie Deshayes, until her death in 1959.

Britta Schill became part of the first cohort of girls to graduate from Helsingborgs flickläroverk and, after having worked at a preschool at Birkagården in Stockholm for a year, she qualified as a preschool teacher at Fröbelinstitutet in Norrköping. She then spent a year in London before gaining a position at a preschool in Jönköping. In 1943 she moved to Stockholm where she became involved in socialpedagogiska seminariet, founded in 1936 by Alva Myrdal. After working alongside Alva Myrdal Britta Schill succeeded her in 1948 becoming principal of the training-programme. She continued to develop its visionary pedagogical approach to training preschool teachers. She has been described as an innovative pedagogue who had strong empathy towards children and her own students, future preschool teachers. Following her appointment as principal Britta Schill worked closely with Ann Margaret Ericsson, who took over managing the boarding accommodation.

Britta Schill was also active within the Sveriges barnträdgårdslärarinnors Riksförbund (later Sveriges Förskollärares Riksförening) interest group, for which she served as a member of the board from 1944 onwards. Salaries and working conditions for this profession had been serious neglected and Britta Schill, along with Stina Sandels and others, sought to improve these areas through the union. She wrote articles for the Barnträdgården journal which discussed conditions edured by female preschool teachers.

In 1949 she attended an international conference at which the World Organisation for Early Childhood Education was set up and she became one of its 12 board members. UNESCO, which hitherto had not supported preschool education matters, lent its official support to both the conference and the new organisation. Even after her retirement Britta Schill maintained her involvement in the organisation and as late as 1985 she attended the world conference held in Japan, where she gave a well-noted speech.

In order to qualify as a principal it was necessary to have a university degree. Britta Schill gained her Bachelor’s degree in 1951. Alongside her demanding job as principal Britta Schill carried on developing her skills. In 1971 she gained her licentiate in pedagogy, having written a dissertation entitled Idealitet och realitet i dagens förskollärarutbildning, which was subsequently published as a book with the same title in 1973. Maj Ödman’s work, Barnets utveckling published in several editions throughout the 1960s, was a collaborative effort with Britta Schill.

Britta Schill died in Stockholm in 1990. She is buried in the memorial garden at Norra begravningsplatsen (the Northern Cemetery) in Solna. 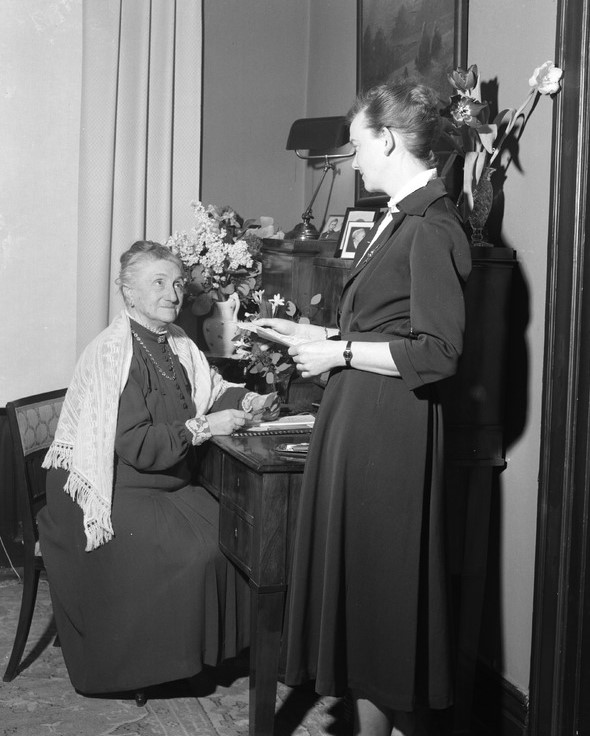