Teacher, pioneer within the field of school libraries

Alvida Sandberg devised and developed the school library enterprise in Gothenburg. She also inspired and influenced library developments in Sweden.

Alvida Sandberg was born in the Fet municipality of Norway in 1865. Her parents were Swedish. In 1883 she graduated from the junior-school teacher-training programme in Åmål. Having spent a few years working as a teacher on that same programme she then continued her studies at the public-school teacher-training programme in Falun, from which she graduated in 1889. She was employed by Gothenburg city’s public schools in 1892, remaining in post until 1927. Despite being officially due for retirement in 1924 she was asked to stay on.

Alvida Sandberg’s main life’s work began at a parents’ meeting on 22 November 1896. It had been organised by the school authority in Gamlestaden congregation under the heading of “How can parents and teachers promote morality among our youth?”. Alvida Sandberg summarised the meeting in these words: “The discussion was very lively, as is usual when a large group discusses the constant confusion experienced by young people. Most who spoke believed that problems mainly arise amongst boys who hang about on the streets after dark and get into trouble. Even young boys are using chewing tobacco and smoking pipes. Recently a new diversion has emerged: they are being drawn to the cigar vendors and the immoral literature they sell. Parents complain that the boys will read anything they can get their hands on, and that any pennies they have saved up is being spent on these gaudy pamphlets.” Alvida Sandberg suggested that one way of dealing with these issues was to establish a school library that contained suitable books. Her proposal met with agreement and in the autumn of 1898 the first school library opened in the Redbergslid school district. Alvida Sandberg was very proactive in this matter and her initiative generated a lot of attention and supporters. Before the turn of the twentieth century all the Gothenburg school districts had set up their own libraries. Initially the enterprise depended on voluntary work as well as fund-raising and donated books, but just a few years after its inception the board of education organised official funding.

Alvida Sandberg made it her life’s work to create good, modern, well-supplied libraries, primarily school libraries. She became a missionary of what became known as the “library enterprise”. Alvida Sandberg was involved in the Nick Carter-debate, a campaign against immoral literature, which led to increased efforts in 1909 on behalf of the school library in Gothenburg. The number of books increased and the opening hours were extended, whilst ‘reading evenings’ were introduced, providing a combination of homework help and promoting literacy. On Alvida Sandberg’s suggestion the school library central office (known today as Skolbibliotekscentralen) was set up in 1916 in order to raise standards, and to increase resources and skills at libraries. Alvida Sandberg ran this office until 1927.

Alvida Sandberg’s missionary activity on behalf of the “library enterprise” took many forms. In addition to producing a handbook on running small libraries she also wrote numerous articles in library journals and teachers’ journals, as well as public education journals. She herself was active in teachers’-, library-, and public education societies. She was very busy, giving talks, providing training, and engaging in polemics. Alvida Sandberg believed that books and education offered a means to a better life. Thus she felt it was important that both teachers and librarians should be well-educated and effective pedagogues in order that they could provide children with reading material that was suited to each individual or that was appropriate to each situation. The skill-set she felt was mandatory for librarians – particularly librarians working with children – in terms of competence, engagement, and creativity, are still relevant today. The same is true for her expectations of and demands of what libraries should contain. She wanted them to typically include a careful selection of books which reflected a broad social and cultural spectrum, solidly anchored in the local community. She herself contributed a couple of translations and edited versions of books published by Barnbiblioteket Saga. She took her own inspiration and knowledge from various study trips, mainly to the USA, but also to Great Britain, Norway, and to other libraries across Sweden.

Alvida Sandberg’s involvement in the “library enterprise” continued long after she had retired from her job. In 1938 the Dickson library received an anonymous donation intended for mobile libraries, comprising supplementary readers specially aimed at schools in northern and the middle of Bohus county where many children lived in poverty and libraries were very basic. The donor proved to be Alvida Sandberg, who subsequently invested more money on the condition that state funding was sought. During the 1950s there were more than 200 mobile library units in circulation thanks to her efforts.

Alvida Sandberg was a great admirer of Jane Addams, a rich American woman who invested her wealth in social work, popular education, peace activism, and in the struggle for women’s suffrage. Alvida Sandberg had already given an inspiring talk on Jane Addams at a meeting in Falun on 7 October 1916 – the Swedish women’s suffrage day. Throughout her life Alvida Sandberg displayed a particular interest in poor children and children who experienced difficulties at school. She visited London and studied a range of pedagogic methods, which she described in her travelogues on open-air schools and ‘hjälpskolor’ (special needs schools). Her exhaustive review of not just the ideology, but also the pedagogy, management, and finances of these schools catering for physically, mentally and socially challenged children, was intended to disseminate new educational methods and approaches in Sweden. Alvida Sandberg received several merits for her work and became an honorary member of various societies.

Alvida Sandberg died in Gothenburg in 1953. She was buried in that city in the Östra cemetery. She willed most of her not insignificant wealth to the Våra Gamla i Göteborg association, barring a small amount which went to Dövas Väl and a few items and paintings which were specified for certain friends and relatives. 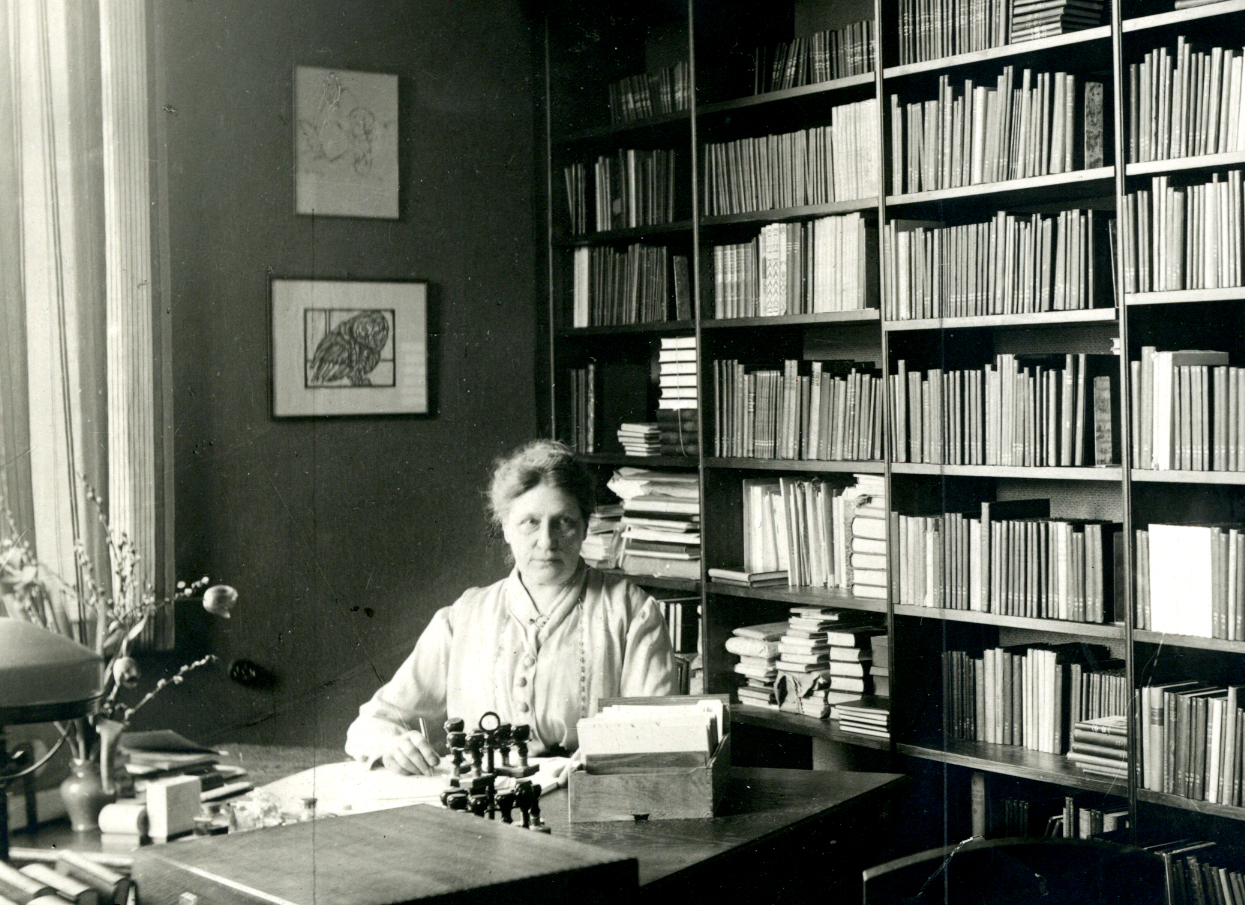