Amelina Sterky was a barber surgeon, active during the 1890s, and the only woman to be engaged as an examiner for the barber surgeon training courses.

Amelina Sterky was born Nyström in 1842 in Stockholm, as the youngest of five siblings. Their father Carl Nyström, a grocer, died early on, in 1844. Their mother Emilia Almér was not impoverished but had to be very thrifty to be able to support her five children. They had to leave home as soon as they possibly were able. When their mother died in 1858, only Amelina Sterky and her eldest sister Emilia, born in 1829, were still living at home. Emilia probably had to take responsibility for her sister.

In an interview in the magazine Idun on 17 March 1893, Amelina Sterky recounted that she had attended a coeducational school with her brother who was a few years older, and that she participated when the boys played at war. She had the hated role of being a Russian in the war, however. It was more unfortunate that she as a girl was not allowed to study French and Latin like the boys. Instead she studied music at the Royal Academy of Music and was one of four students to receive a laudatory assessment from the Academy’s Chairman Prince Oskar, later King Oskar II.

At some point at the beginning of the 1860s, Amelina Sterky became the foster daughter of Katarina Augusta Sterky, whose surname she took when she moved to Uppsala in 1873. In Uppsala, Amelina Sterky realised the dream she had had since childhood: to devote herself to surgery. She started to participate in the Samaritan courses organised by Carl Benedict Mesterton, a professor of surgery. Gradually she also started to serve at the surgical outpatients’ clinic and even to hold her own healthcare courses at the Teacher training college for elementary school teachers and at the Uppsala grammar school for girls. Since Amelina Sterky was already 31 when it first became possible for girls to read medicine in Sweden in 1873, she was unable to continue her education to become a surgeon, but had to satisfy herself with the shorter barber surgeon training.

The barber surgeon profession has existed since the late medieval period. It builds on the guild system’s training steps with at least three years as an apprentice then a further four years as a journeyman. If there was a position vacant one could become a master barber surgeon with the right to practise one’s craft. As from 1861, women also had the right to become barber surgeons. The requirement of having a long apprenticeship and journeyman training was changed with time so that other service could also be recognised.

It was probably with the qualifications from Uppsala as her foundation that Amelina Sterky took her barber surgeon examination in 1889 with excellent honours without having been an apprentice or journeyman. During the years 1891 until 1893 she had the honourable assignment six times as the first and only woman of being the examiner when barber surgeons took their final exams.

The idea came up in the Fredrika-Bremer-Association during the 1880s of training nurses to become barber surgeons so that they could later help the nation’s population with basic healthcare. The shortage of doctors was great, especially in rural areas. Amelina Sterky was recruited as the principal for that education from 1894. A number of student places were made available for the healthcare tuition that was to precede the theoretical studies at the Sabbatsberg hospital. The students were later enabled to serve at the surgical outpatients’ clinic at the Serafimer hospital and attend the lectures at the Karolinska Institute. Many women attended these courses. In the autumn term of 1894, the course consisted of seven women and one man. Teaching was however discontinued after the Royal decision of 5 June 1896 to do away with the barber surgeon qualification.

The barber surgeons’ guild system of training had become more and more anachronistic as modern medicine began to develop. It therefore ceased in 1897 and both doctors and surgeons received the same tuition and training. Barber surgeons who had already qualified were however permitted to continue their work. The last one continued as late as 1950 to receive patients.

Katarina and Amelina Sterky lived together right up until the foster mother’s death in 1903. The household grew in 1883 when Amelina Sterky as a foster daughter took care of 10-year-old Anna Maria Jennings from Skånelaholms manor. The girl’s father was John Jennings, a captain at the Uppland regiment. He had three other children. Anna Maria eventually became a teacher at the Uppsala grammar school for girls, but continued living with her foster mother. We do not know how Amelina Sterky supported herself after her time as a barber surgeon. She probably took care of their home while her foster daughter was working.

Amelina Sterky died at the age of 79 in pneumonia, at the Samaritans’ Home hospital in Uppsala on 24 March 1922. Her estate inventory showed that the balance of the estate was 1,043,000 kronor. After deductions for some smaller legacies to her nieces and nephews, she bequeathed the rest to her foster daughter “the honourable” Anna Maria Jennings, who actually died of a heart disease the same year, on 9 May. Three days before her death, Anna Maria Jennings had set up an oral will and testament on her sickbed. In it, she dictated that 30,000 kronor should be set aside for the establishment of a free bed at the Samaritans’ Home. The donation was to bear the name “Carin and Amelina Sterky’s free bed fund” (Amelina Sterky’s foster mother’s name was also anglicised as Carin).

The only personal testimony about Amelina Sterky exists in the interview with her in Idun in 1893, but it is written in the rather servile style of the time. She was clearly both gifted and bold as a person, since she secured for herself such an unfeminine profession as barber surgeon was considered to be at that time. Since that particular training was discontinued soon afterwards, she did not have the opportunity to develop in her coveted role as a surgeon, nor was she able to realise her dream of training nurses to become barber surgeons.

Amelina Sterky lies buried with her foster mother and foster daughter at the Uppsala Old Cemetery. 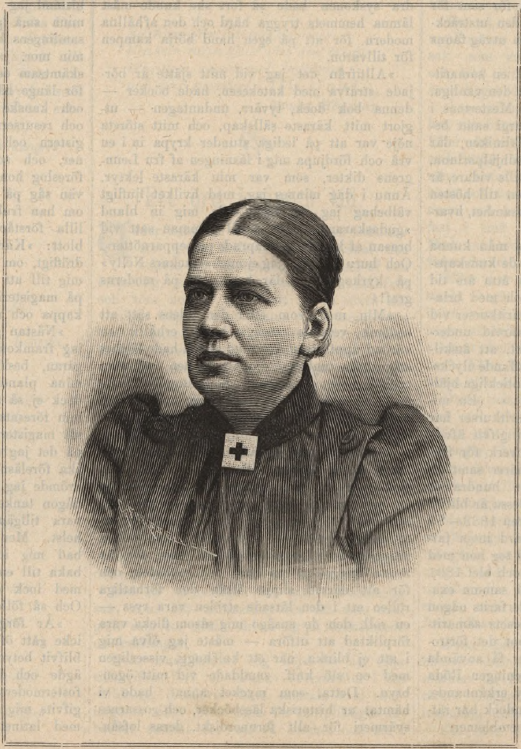