Teacher, popular educator, founder of a lending-library for the blind

Amy Segerstedt played an important role in education provision for those with impaired eyesight. One of her achievements included founding a lending-library for the blind.

Amy Segerstedt was born in Åmål, Dalsland, in 1835. Her father, Fredrik Segerstedt, was a town- and spa physician in Åmål. She had three siblings: Lovisa (known as Louise), Wilhelmina and a brother named Vitalis.

The Segerstedt couple home-schooled their daughters whilst their son Vitalis was sent to Uppsala cathedral school. Following her father’s death in 1858, Amy Segerstedt’s mother Petronella took her and her youngest sister – known as Helmina – to Uppsala. In the autumn of 1861 the girls began attending the Thengberg school, which offered eight years of schooling, ending with a final year-long female teacher-training programme. Amy Segerstedt only completed the teacher-training programme. She subsequently worked as a governess for just over ten years. In 1874 she gave that up and began working as a teacher at the Klara Linds ementarskola för flickor (elementary school for girls) in Gävle. She remained in post until 1879 when she enrolled on Falu folkskoleseminarium (public school teacher-training programme), from which she graduated in 1880. After working as the director of a newly-established elementary school for girls for a few years in Åmål she, in 1884, became the director of a private school for the deaf, called Tysta skolan, in Stockholm.

At this point Amy Segerstedt was 46 years old. During her time working as a governess she had taught both blind and deaf children but she did not have any specialised teacher-training in the field. Before she took up her post at Tysta skolan she audited classes at schools for the deaf in Denmark and Norway in order to familiarise herself with the “Hill speaking method”. The school board wanted to modernise the teaching methods at Tysta skolan by replacing the use of signing in teaching with spoken Swedish. The teaching curriculum was altered so that it resembled the one used in public-school teaching as far as was possible. One of the new elements introduced was traditional wood-working. Amy Segerstedt carried on working at Tysta skolan until 1894. During this time she was also engaged in the general discussion on schools and she took a particular interest in vocational training for girls. One of her initiatives was a further development course for deaf girls who were inspired by what they had learned in domestic science classes.

Amy Segerstedt began to take an interest in braille after a deaf student who suffered from retinitis pigmentosa enrolled at the school. The teachers believed that she would eventually go blind. Amy Segerstedt then began to investigate what this student’s options were with regard to gaining an education and what writing methods were available for the blind. She settled on Louis Braille’s system of raised dots which could both be read and written. In the summer of 1885 she and her sister Helmina travelled to Paris to attend a conference for those who taught the deaf. There they sought out Maurice de La Sizeranne, who was a pedagogue, and learned braille from him using a slate and stylus.

Once they had returned to Sweden the sisters began to make braille versions of books whilst also teaching friends and acquaintances the method. In 1891 Föreningen för blindskrift (the braille society) was founded, focused on producing books for the blind using braille and ultimately aimed at founding a lending-library for the blind. The library became a reality on 6 December 1892, comprising 191 volumes in braille, all of which had been produced by members of the society. The library premises were located in a small space behind the Blindas Väl shop on Jakobsgatan in Stockholm. In 1912 De Blindas Förening (DBF) (society for the blind) took over the lending-library, which served as the origins of today’s state-run Myndigheten för tillgängliga medier (MTM) (accessible media authority).

Amy Segerstedt was a member of that library’s board until 1901, at which point she and her sister Helmina moved to Gothenburg. She spent the rest of her life dedicated to public education. She taught both the sighted and the visually-impaired to use braille and ran courses in gardening for visually-impaired people. In 1912 Amy Segerstedt and her sister Helmina moved back to Åmål.

Amy Segerstedt died in 1928. She is buried at the Åmål cemetery beside her eldest sister, Louise Larsson. 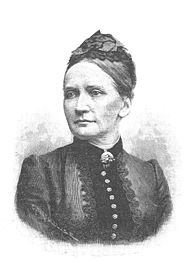