Anna T Nilsson was a Malmö drawing instructor and a committed suffrage and peace activist. After retiring she spent time during the 1930s travelling through Europe seeking to disseminate her pamphlet, Fredsrörelsens A B C: Data och fakta. It was translated into ten different languages.

Anna Alida Theresia Nilsson was born at Toarp manor house in Södra Säm, Västergötland in 1869. She was the fourth child born to a family of five. Her father, Hans Petter Nilsson, was a promoter in the textile cottage industry. On his death in 1885 a guardian stepped in to replace him. Her mother, Albertina Juliana, remarried, this time to a relative. The next year, in 1886, Anna T Nilsson travelled to Stockholm at the age of 16 to begin attending Högre konstindustriella skolan (HKS), now known as Konstfack (college of arts, crafts and design). Her sister Ada Nilsson, who was three years her junior, was already in Stockholm where she was attending the Lyceum school. Initially the two sisters boarded with one of their maternal aunts but later they shared a home together which Anna T Nilsson was responsible for.

Anna T Nilsson gained her qualifications as a drawing instructor in 1890. She spent two years working as a junior teacher at the Stockholm Tekniska professional school, during which time she also gained penmanship qualifications. She then moved to Malmö where she spent eight years working as a drawing instructor at the Tekniska afternoon- and evening-school. In 1900 she returned to Stockholm for six months to serve as a pattern designer, followed by an academic year spent as a drawing instructor in Strängnäs. Anna T Nilsson was drawn to return to Malmö and from 1902 onwards she divided her time between Fröknarna Bunths skola för flickor (Misses Bunths’ school for girls) and Malmö’s realskola för pojkar (junior secondary school for boys). From 1910 until her retirement in 1929, however, Anna T Nilsson only worked at Malmö realskola. During the 1920s she even lived in the large apartment which occupied that school’s attic.

Anna T Nilsson was a member of various associations in Malmö, including those supporting women’s suffrage, education, and rights. She frequently served on the boards of Skåneförbundet för kvinnas politiska rösträtt (Scanian federation of suffragettes), Malmö Damsällskap (ladies’ society), Malmö kvinnliga övningsklubb (women’s exercise club), Malmökretsen för Fredrika-Bremer-Förbundet, Malmö Kvinnliga Klubb- och Läsesällskap (women’s club and reading society), and Malmö Frisinnade Kvinnoklubb (liberal party women’s club), to name but a few. An article published in Rösträtt för kvinnor in 1918 reveals her activities. The first chamber of parliament had rejected a call for suffrage and around 5,000 women and men had gathered to officially protest this decision in Slottsparken. Negotiations were undertaken at Malmö realskola where “…the Scanian federation’s tireless secretary, Miss Anna Nilsson, was in her own domain, the school’s drawing classroom”.

One of her particular interests was the raising of Kvinnornas hus (the Women’s House), Årsta, at the 1914 Baltic Exhibition held in Malmö. Anna T Nilsson first suggested to the local Fredrika-Bremer-Förbundet that a brochure should be produced in order to show how women were integral to various aspects of society. The project expanded, through the involvement of a male architect who was a member of Fredrika-Bremer-Förbundet, into the construction of Kvinnornas hus, which was a copy of Fredrika Bremer’s castle at Årsta, at the exhibition site. The local women’s groups did not believe they had enough financial resources for such a project but Anna T Nilsson took her idea to the Stockholm branch of the federation. She then began to work for a local committee herself. When the Baltic Exhibition opened on 1 May 1914 Kvinnornas hus, Årsta, was complete. The rooms were filled with information about women’s contributions to society, both on social and professional levels, and served as a demonstration in favour of women’s suffrage.

Following the end of the First World War Anna T Nilsson devoted herself to the women’s peace movement. When the Internationella Kvinnoförbundet för Fred och Frihet (IKFF; International women’s league for peace and freedom) was established in 1919 she was elected onto the central board, one of five rural representatives. She was also the instigator of Kvinnornas fredsförbund (women’s federation for peace) in Malmö. Meetings, aimed at mobilising the involvement of women, were held in her apartment at the school, in the form of invitations to tea. In 1923 she, along with Matilda Widegren and participants from Norway and Denmark, set up Nordiska lärares fredsförbund (Scandinavian teachers’ federation for peace) in Malmö. Every year she celebrated Skolornas fredsdag (schools’ peace day), and expanded the idea into Skolornas fredsförening (schools’ association for peace). Anna T Nilsson felt there was a need for a publication on the peace movement and its activities and so she authored a pamphlet entitled Data och fakta rörande fredsrörelsen in 1924. Kvinnornas Fredsförbund was restructured as an IKFF circle in Malmö and a Scanian division was set up. In 1929 this federation organised a national information course to which several external guests were invited. The county governor and the chair of Malmö municipal council contributed funding. Some of the guests were put up between the map-stands and the drapes in the drawing-room of the attic beside Anna T Nilsson’s apartment above Malmö realskola.

In the autumn of 1929 the newly retired Anna T Nilsson travelled through Europe by train and bus to visit as many countries as possible. She went to Finland, the Baltic states, various Continental European countries and the Mediterranean, as well as to Turkey and North Africa. Geneva served as frequent halfway point for her travels given that the main bases of the United Nations and the Women’s International League of Peace and Freedom (WILPF) lay there. Her aim was to inform people about peace, to disseminate and translate her pamphlet, the English title of which was ABC of the Peace Movement. Dates and Facts, into other languages and to mobilise women on behalf of international peace work in WILPF. The pamphlet was released in Swedish, Esperanto, English, French, Estonian, Finnish, Serbian, German, Polish, and a summary was published in Arabic. In total 20,600 copies were released in 10 different languages. Anna T Nilsson lived off her pension by staying for longer periods in places where the cost of living was cheaper and printing costs were low, and spending shorter times in more expensive places so that she could visit the sights and museums.

Anna T Nilsson took inspiration from the interwar period demands that history textbooks be revised to include contributions which advocated for peace. From 1934 onwards she began to collect examples of Danish, Norwegian, Finnish and French textbook references to peace work. The aim was to make a comparison of high school history books from different countries. Positive extracts were translated and shown to textbook authors. She visited the educational departments in twelve capital cities and posed two questions: Is there anything similar in your schoolbooks? If not, could they then promise to include something in the next edition? In each country she would seek out a current textbook and, through the help of various contacts, seek an answer to the first question. By prior arrangement two individuals would check up on any promises made. Anna T Nilsson was interviewed by the Dagens Nyheter newspaper on her return from her travels. The interview was translated into German and then sent to everyone she had met in the twelve capital cities. The interview revealed that most people had largely been favourable to her idea, that Austria already had comparable texts in their schoolbooks and that the Germans had been unwilling to officially answer the question either in the positive or the negative.

During the Second World War Anna T Nilsson reconstructed the 1919—1929 work undertaken by Kvinnornas fredsförbund in Malmö in blue notebooks and these can now be seen at Malmö Stadsarkiv (city archives). Her book, entitled Tio lyckliga år. På resa i fredsarbetets tjänst, was published in 1945. Anna T Nilson was a dedicated initiator of efforts related to the peace movement. She educated herself, provided for herself financially through her long-standing teaching post, created networks and contacts. Her job not only gave her access to accommodation but also facilitated meeting spaces for peace activism, while her pension enabled her to travel and cover her subsistence needs. All these resources allowed her to act on both a local and a European-international level in order to realise her dreams.

Anna T Nilsson died in 1947. She is buried, beside her sisters, at Södra Säm cemetery in Västergötland. 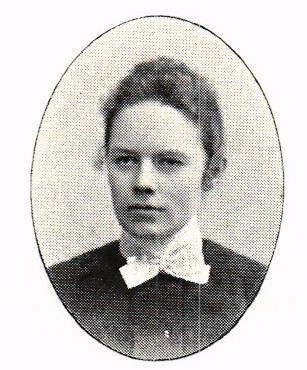