Anna Fischerström founded Fischerströmska skolan in Karlskrona in 1882. She ran it until 1896 when it was transformed into an advanced school for girls. She remained in place as the school director until she retired.

Anna Fischerström was born into an officer’s family in Karlskrona in 1854. Her younger sister Ellen was born a few years later. The girls’ father was a naval captain whom they sadly never came to know well as he died of consumption just a few months after Ellen was born. Their mother remarried some years later and in 1866 their younger half-brother, Thorvald, was born. Ellen and Anna Fischerström remained together throughout their lives, not only working together but also living in the same house.

Anna Fischerström became interested in schooling for girls at an early stage. Amongst other things she travelled to Switzerland to investigate the finishing schools for girls there. Her travels also involved language-learning, presumably French. French was the first foreign language taught at girls’ schools at this time. Anna Fischerström was still young when she got her first job within the educational sphere. From 1876–1881 she was the director of a private school for girls. In 1882 she founded Fischerströmska skolan in Karlskrona. This was initially a small school but it expanded gradually to comprise 90 students in eight different classes. Although it was primarily a school for girls and young women a preparatory section which accepted both boys and girls was also included. Anna Fischerström served as that school’s director until 1896, at which point the school was transformed into Karlskrona högre läroverk för flickor (advanced school for girls). One year later the school moved to newly-built premises at Amiralitetstorget. Anna Fischerström's name lives on to this day in Fischerströmska gymnasiet.

The new school took the form of a limited company which extended the existing Fischerströmska skolan and the new Karlskrona elementärläroverk för flickor. During the 1896–1897 academic year there were about 200 pupils at the school, where each class numbered between 13 and 26 individuals. The fee per term ranged between 40 and 75 kronor, with the higher amount relating to the upper classes. The school received a state subsidy and funding from Karlskrona municipality and was obliged in every academic year to accept a certain number of non-fee paying pupils as well as some who paid reduced fees.

Anna Fischerström was appointed director of Karlskrona högre läroverk för flickor and she was much-loved in this role. Despite having no formal training as a teacher she had a keen interest in and talent for teaching. In addition to her role as director she also taught both French and religious education. Her considerable talents for planning and organisation are particularly apparent in the annual reports which she authored. Her sister, Ellen, who was trained in handicrafts, also worked at the school.

Anna Fischerström had more than one string to her bow. She was involved in the ongoing discussion of women’s suffrage and was an active member of local suffragette association. The group had been set up in Karlskrona in 1904 by Sigrid Kruse. Sigrid Kruse was one of the teachers at the school and the minutes from the association’s first meeting reveal that it was held on the school premises. Anna Fischerström approved these initial minutes, accommodated the meetings in her school, and was herself an active member of the association.

In 1909, following more than 30 years of service, Anna Fischerström resigned from her position as director of the girls’ school. In many ways she had performed a pioneering role, a task which had enabled an increasing number of girls to obtain qualifications. On leaving her post in 1909 she donated funds to set up a stipend in her name. 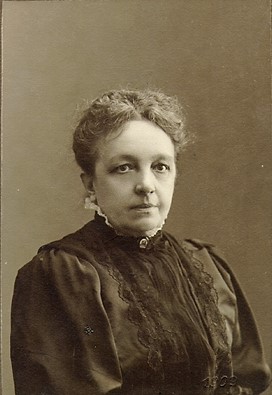