Anna Johansson-Visborg became a legendary figure due to her trade unionism and political activism in Stockholm during the first half of the twentieth century. She was a ground-breaker and innovative, in housing policy and elsewhere, and she often forged her own path in her efforts to create a better society.

Anna Johansson-Visborg was born in 1876. She was the third child born to a small-holder family living in the small village of Beateberg in Västergötland. The family had a small bit of land, a small hut in the forest, a barn with some animals, and for a time they even had a cargo boat. Intermittently times were hard for the family and everyone had to lend a hand to make ends meet, which could even include log driving. Anna Johansson-Visborg’s father, who was well-known for his determination, was her greatest lifelong role model. It was he who wanted her to get out and see the world, to educate herself, become an independent thinker, and to never give in when she knew she was in the right. Aged 17 years old Anna Johansson-Visborg travelled to Falköping in the hopes of being taken on as a trainee nurse without having to pay tuition fees. Becoming a nurse was her dream profession. However, all the available places were already subscribed so she had to settle for working as a washerwoman at the local hotel instead. Following a stint as a nanny in Gothenburg for a wealthy doctor’s family – who mistreated her and underpaid her – she travelled to Stockholm in 1897 to visit the World’s Fair there. Initially she gained employment as a waitress in a beer tent at the Fair and then, in the autumn, she gained a job as a bottle-washer at the Hornsberg brewery.

When Anna Johansson-Visborg arrived in Stockholm the city was experiencing a serious housing crisis. As a result she even had to spend one night in a cemetery for want of a place to stay. She then slept on someone’s kitchen sofa, and later lived in the garret of a Holmia workers’ house. In 1905 she, her sister Laura, and her father began to build their own four-apartment house on a small bit of land which they had purchased in Ulvsunda, Bromma. In 1914 she bought another bit of land in Äppelviken also in Bromma, where she began to have her own house constructed. She was the project supervisor and had all the necessary skills despite lacking formal qualifications: at that time no builders took on female apprentices. She moved into her home in 1916, leaving the Södermalm address at which she had been registered since 1912. Sven Wisborg, the man she went on to marry and whom she had met around 1909, also lived there.

It was industrialisation that set Anna Johansson-Visborg on her path towards trade unionism and political activism. The dismay she felt about female workers earning half of what their male counterparts earned led her to become a founder of the first women’s trade union in 1901, shortly thereafter serving as the union’s chair. She was reputed to be a contentious agitator and skilled organiser, and often went by the name of Bryggar-Anna (Brewer Anna). She was determined and, despite facing tangible opposition, did not give in. She was elected onto Bryggeriarbetarförbundet (brewery workers’ association) board in 1906. She was the first and only woman, for the ensuing three decades, whose campaign activities included fighting child labour, supporting the implementation of a 10-hour working day and the provision of 60 days’ unemployment benefit. In 1908 she was fundamental to writing the very first motion which dealt with the principle of equal pay. She further campaigned on behalf of healthier working environments and against the creation of segregated laws of various kinds. She also authored the motion which led to the establishment, in 1929, of a socialist public college, the LO school at Brunnsvik, which was active until 1995.

Anna Johansson-Visborg’s political activism developed in tandem with her trade unionism. The main agitators of the workers’ movement often gave lectures to women in the trade unions. Anna Johansson-Visborg was inspired by these talks and joined the Social Democratic party youth club called Revolt. She then became friends with Zeth Höglund and Fredrik Ström who proved to be very important to her political activism. Kata Dalström also served as an important source of inspiration in the political education of working women. Anna Johansson-Visborg was a member of the Social Democratic Stockholm Public Women's Club in which Elin Engström, who was also a club member, became an important mentor and friend.

Through her membership of the Stockholm Public Women's Club Anna Johansson-Visborg was introduced to the suffragette movement and to the Förening för kvinnans politiska rösträtt (FKPR, locally LKPR) (association for women’s suffrage). She and Anna Lindhagen and Anna Pettersson set up Mullvadkommittén to activate female workers. This was how she also met Alma Sundquist, the doctor. Anna Johansson-Visborg volunteered to go under-cover as a cleaning woman called Stina and work at a bachelor’s hotel as part of an investigation into how poorly-paid working women were forced into prostitution. She also met the Tolfterna group, became an acquaintance of Ellen Key, whose talks and writings inspired her, particularly with regard to her thoughts on education. Other important sources of inspiration for Anna were the thoughts of Frida Stéenhoff on women’s economic emancipation and the ideas of Elise Ottesen-Jensen on women’s emancipation as achieved through birth-control. Karin Adamsson, whom Anna Johansson-Viborg had already met within the context of the Social Democratic party youth club, also became a friend. In 1910 the first sexual politics organisation was founded, namely Sällskapet för humanitär barnalstring (society for humanitarian procreation), for which Anna Johansson-Visborg served as the first chair.

Following several intense years spent within industry, Anna Johansson-Visborg began attending a Sunday course on book-keeping. On completing the course she gained a job as an office assistant at an insurance company and rapidly gained promotion to salesperson. She also trained as a construction worker and in cooperative business management.

At an early point in her life Anna Johansson-Visborg had already developed an interest in the cooperative movement and its vision of freeing workers from their private business creditors. She was among those who, in 1906, established a cooperative sewing business called Linnéa. From 1907–1938 she served as chair of the Kooperativa Kvinnogillesförbundet (cooperative women’s guild association), whose main role was to educate housewives in the importance of supporting the cooperative-run shops (KF).

In 1916 Anna Johansson-Visborg was elected onto Stockholm city council representing the Social Democratic party. She wrote hundreds of motions which led to many improvements for working women. Her achievements include a nursing school where working-class girls could train without fees, establishing the first municipal laundry, setting up sexual-advice offices, focusing on providing support, a community and education to unemployed women, and the municipalisation of Mjölkdroppen, which was a private source of financial aid for single new mothers.

One of her main fields was housing for working-class women. Anna Johansson-Visborg understood the need for well-laid out affordable apartments. She became a political force within Stockholm housing policy with her own constructions and eventually by creating a housing trust. Further, she was a member of many agencies throughout her years as a politician (1916–1950).

Anna Johansson-Visborg was one of the founders of the Social Democratic Women in Sweden (now S-Kvinnor) in 1920. She resigned from this association in 1924 following the opposition she faced in relation to the campaign to ban alcohol and the associated referendum in 1922, in which Bryggeriindustriarbetarförbundet unsurprisingly supported the ‘no’ side. She did not return to working with Social Democratic party women until later and in 1942 she set up the Tranebergs socialdemokratiska kvinnoklubb (Social Democratic women’s club).

In 1923 Anna Johansson-Visborg understood there was a need to bring all of Stockholm’s women who were trade unionists together. She set up, and served as chair of, the Kvinnornas fackliga samorganisation (womens trade union confederation) in Stockholm, which later changed its name to Fackliga Centralorganisationens Kvinnosektion (FCO), and set up the Arbetets Kvinnor magazine, for which she was both editor and publisher. A lot of focus was placed on education to which end the Nordiska studieveckorna (Scandinavian study weeks), Utbildningssöndagarna (educational Sundays) were established, and many courses were organised. Anna Johansson-Visborg also attended several Scandinavian and international conferences herself.

Whilst Anna Johansson-Visborg was at the helm of FCO, a holiday home in the Stockholm archipelago of Nacka was opened under its aegis. This site expanded during the ensuing years to include several large buildings and around eighty small cottages. In 1931 a cooperative venture was established to run the holiday home, named Stockholms arbeterskors semesterhemsförening (Stockholm female workers’ holiday association). In 1946 it was reorganised as Stiftelsen Anna Johansson-Visborgs minne (the Anna Johansson-Visborg memorial trust) which focused on renting out affordable holiday cottages and rooms to needy women.

Towards the end of the 1930s Anna Johansson-Visborg began working towards constructing a centrally located high-rise building, with well-thought out and affordable small apartments, aimed at low-paid female workers. Following several years of struggles the building was completed in 1946 and, as such, comprised the first residential skyscraper in Stockholm, thirteen storeys high and known as Kvinnohuset (the Women’s building). This was a successful building which included modern laundry rooms, communal rooms, and even its own cinema. Anna Johansson-Visborg also sat on the non-profit Stockholmshem board for a period of ten years.

Anna Johansson-Visborg only married Sven Wisborg in 1919. The married couple always spelled their surnames differently, throughout their lives. Before they married they had run a cinema operation together out of rented premises near Hornstull, making such a success of it that they were able to build several of their own cinemas. Over time the business made Anna and Sven wealthy and in 1944 they were able to donate 300,000 Swedish kroner to form the starting capital for a trust: the Anna Johansson-Visborg trust, dedicated to the continued construction of apartment buildings, supplying good quality and affordable housing. Anna Johansson-Visborg also had another holiday home constructed in Lilla Lindhult where she had grown up. It was completed in 1946 but had already become abandoned during the mid-1950s.

During the Second World War Anna Johansson-Visborg also performed various roles in the wartime emergency services, such as taking in Finnish war refugee families with children as residents at the holiday home. She also actively fundraised to support these Finns, in part through mobile laundry services. Anna Johansson-Visborg was awarded four medals in recognition of her many years of social contributions: the St. Eriks medal in 1939, Silvernålen in 1945, the Illis quorum medal in 1941, and the Vinterkriget (Winter War) medal in 1945.

Anna Johansson-Visborg died in 1953. She is buried in Sandsborg cemetery. The two trusts bearing her name are still extant. In 2010 a small area in the corner of Thorildsvägen/Creutzgatan was named Bryggar-Annas täppa, not far from the brewery where she began her career and where her first residence, the garret in Holmia workers’ housing, lay. 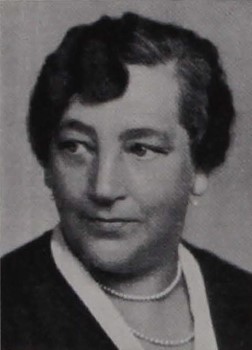