Anna Julie Heilborn was an inventor who invented the mobile kitchen.

Anna Juliana Heilborn was born in Skeppsholm parish in Stockholm in 1865. She was the second child of lieutenant commander Claës Olof Lorentz Rudbeck and Magdalena Rudbeck. She grew up in an upper-class home in Stockholm along with her elder brother and a younger sister. Both her father’s and mother’s family roots lay in various branches of the well-known and significant Rudbeck family. As was common among many noble families there was also a notable military aspect to the Rudbecks. Anna Julie Heilborn’s father Claës Lorentz was a naval lieutenant commander and was extremely interested in artillery techniques. For example, he was involved in developing underwater mines. He was killed in an accident at a text explosion at the Ladugårdsgärd the same year that Anna Julie Heilborn was born. As the family owned their home at Skeppsholmen his wife was able to carry on living there with the children despite his death.

In 1898 Anna Julie Heilborn married August Frans Eugén Heilborn, a civil engineer. He had been born in Stralsund, Pomerania, to Swedish parents, and had studied and worked in Britain, Russia, and Germany. At the time of his marriage to Anna Julie Heilborn he had already been running an electrical business called August Heilborn Elektricitetsbyrå in Stockholm for six years. The couple went on to have two children together: a son called Claes Axel who followed in his father’s professional footsteps and became a civil engineer, and their daughter Alice Magda Heilborn.

Apart from devoting her time and energy to her family Anna Julie Heilborn turned her thoughts and initiative to improving and simplifying her everyday life by inventing practical items for the home. In 1906 she sought and obtained a patent for a mobile kitchen which could be carried on your back and enabled cooking in the outdoors. This mobile kitchen was an ingenious device. It came in the form of a small cabinet. In the middle there was a tin-plated box in which contained a small kerosene burner. The tin was fire-proof and there was even a ventilator to regulate the amount of air and the strength of the heat. One side of the cabinet contained storage space for cooking and serving utensils such as crockery and cutlery. The other side served as a pantry divided into various drawers and sections for foodstuffs. The sides of the cabinet were rotatable and could be set up as a serving table. The mobile kitchen was thus both a kitchen and a dining room which could be simply assembled, taken down, and moved as needed.

Anna Julie Heilborn’s mobile kitchen was intended for private use, for example by individuals on family outings. At the time she got her patent only a minority of privileged social groups undertook this kind of activity. The year after gaining her patent public schools were awarded state funding to teach what was then a new subject of home economics which to a large extent comprised cooking. In order to be able to offer this subject at rural schools mobile solutions were required, namely the so-called mobile school kitchens. Attempts at various mobile teaching kitchens, following European models, had been tried in Sweden since the turn of the century. A vocational domestic sciences school in Uppsala, a leading institute in the area, developed a complete kitchen unit which was then funded by the public schools for mass-production. These mobile kitchens were considerably more unwieldy than Anna Julia Heilborn’s mobile kitchen. Although her invention was never commercially available or accessible to the masses it remains an early example of how food preparation does not have to be tied to fixed areas and spaces. Moreover, Anna Julie Heilborn’s invention indicated the direction that contemporary Swedish camping kitchens would take through the Trangia company as general interest in outdoor and camping activities increased in popularity during the 1930s.

Just like her mother, Anna Julie Heilborn was widowed. In 1930 her son Claes Axel emigrated and went to the USA, where he worked as a civil engineer. Anna Julie Heilborn remained in Stockholm with her daughter Alice Magda, and saw out the rest of her life there.

Anna Julie Heilborn died in Nacka in 1960. She is buried at Boo Gamla cemetery in Saltsjö-Boo. 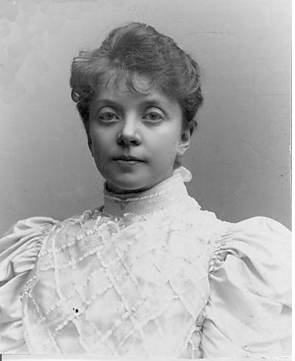