Anna Lindblom was a midwife and a physical therapist. She was also in charge of the first Swedish ambulance to serve in the international conflict known as the second Boer War, which lasted from 1899–1902 in South Africa.

Anna Lindblom’s father had been born into a poor family on a croft in Klockrike, Östergötland in 1809. Johannes Lindblom was, however, a hard-working man who was good at carving and carpentry. He was entrusted with managing Statens Brännvinstillverkning (state-run monopoly for aquavit production), which required him to abstain from alcohol consumption. He then became a property owner and a gentleman farmer. He had tenants and servants and was elected as a lay judge for the parish. Anna Lindblom’s mother, Anna Lovisa Persdotter, was twenty years younger than her husband. The marriage was apparently an unhappy one, leading her to warn her children against marrying. Of her seven children eventually only two ever did get married.

Anna Lindblom’s youth was not too different from that of other well-off farmer’s daughters during the second half of the nineteenth century. She was expected to learn how to run a household and manage staff. In 1884, at the age of 20, she attended a 3-month long summer course at Lunnevad’s folk high school, at which point she also started keeping a diary. This diary, which she kept until 1890, has survived and is now part of the Nordiska museum collections. At Lunnevad Anna Lindblom was taught handicrafts and domestic skills. She suffered a case of typhoid during the autumn of 1884 and her diary relates how she hung between life and death. Lunnevad’s summer courses are frequently mentioned in the diary as both Anna Lindblom and her sister Elin repeatedly attended these courses.

Frans Lindblom, Anna Lindblom’s second eldest brother, was an obstetrician and physical therapist who worked in Uppsala and Stockholm, and later also worked in South Africa. He suggested to his sister that she train as a midwife but she firmly rejected the idea. Instead, on the return from America of her other brother August and his subsequent acquisition of a farm, Anna Lindblom became his housekeeper. In her diary Anna Lindblom notes: “As there is now a need for a housekeeper there, of course I will take this upon myself.” Nevertheless, she never quite gave up on the idea of becoming professionally qualified. When her sister Elin opted to give up the studies she had begun in Stockholm and to return home to Östergötland Anna Lindblom noted: “As I well understood that her future was now ruined I could hardly welcome her home.”

In 1890, following a failed romantic relationship with a young man named Hugo Samuelsson, Anna Lindblom grabbed the bull by the horns and finally decided to embark on training as a midwife in Stockholm. According to the application she made to Barnmorskeläronanstalten (midwifery school) in Stockholm it was her brother Frans who served as her financial guarantor that she would complete the training. On 21 June 1891 Anna Lindblom gained her qualification. In addition to the six months of basic training she had also completed a three-month long so-called “instruments course”. This was a supplementary course which allowed midwives to use equipment such as placing obstetrical forceps around a baby’s head. Anna Lindblom also trained as a physical therapist, most likely at Arvedsons Gymnastiska Institut (AGI, institute of physical education) in Stockholm.

In 1892 Anna Lindblom’s brother Frans moved to Kimberley in South Africa. There he set up his own physical education institute, followed a year later by a private hospital in Johannesburg. Anna Lindblom followed him to South Africa and began to work at her brother’s clinic, remaining there until her brother died of malaria in 1897. She then returned to Sweden for less than a year only to head off to South Africa again in April 1898 following her appointment to manage the Swedish ambulance which served in the so-called Scandinavian corps, comprising 113 men from Sweden, Norway, Denmark and Finland. This corps came out to South Africa in support of the Boers in the conflict which eventually became the Boer War. As the Boers lacked organised healthcare the Red Cross in both Scandinavia and Europe took on the task of providing medical support to the corps. In total there were 12 ambulances in service during the Boer war. Anna Lindblom took charge of the Swedish ambulance and, along with her sister Elin and Hildur Svensson from Gothenburg, these women performed pioneering work as part of the first-ever Swedish ambulance to serve during an international armed conflict. This ambulance comprised “a so-called ‘vortrekker’, a big, wide wagon with large wheels and a canvas roof, handily supplied with a double floor within which provisions and medicines could be stored along with boxes of household goods and other items. It was powered by a pair of oxen, led by two Africans (kaffirs).”

Despite lacking nursing qualifications both Anna Lindblom and her sister Elin nevertheless became known as Red Cross nurses because they were working on behalf of that organisation.

Anna Lindblom returned to Sweden in October 1905 where she resided at Rönninge farm in Södermanland, along with her sister Elin and her surviving brother August. Eventually she moved to Stockholm where she worked as a physical therapist. Her relatives described her as calm, confident, and good-natured. Until the Second World War broke out in 1939 she and her sister Elin undertook a lot of travels together, visiting Great Britain, Germany, Russia, Italy, and Egypt.

Anna Lindblom was awarded the International Red Cross medal in recognition of the service she provided with the Swedish ambulance during the Boer War. She also received the Transvaal and Oranje-Fristat war medal in 1937.

Anna Lindblom died on 14 November 1955, aged 91. She is buried at Gamla kyrkogården (the old cemetery) in Linköping. 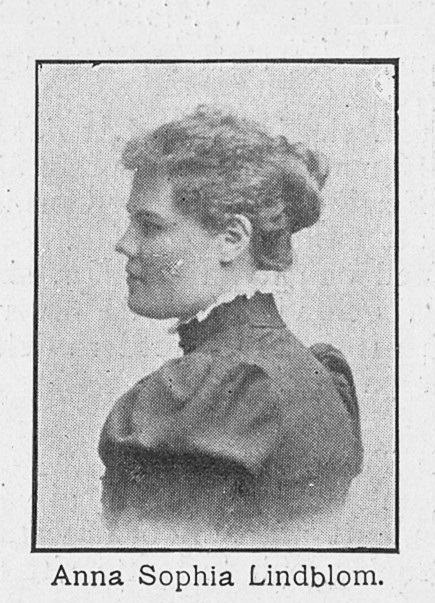