Anna Symonds Ohlin was one of the driving forces in the early twentieth-century temperance movement.

Anna Symonds Ohlin was born in Portsmouth, England on 19 July 1864. Her father was Johan Gustaf Ohlin, whom the sources list as a “trader”. Her mother, Harriette Symonds Ohlin, belonged to one of the most distinguished families in England. She was a loyal patriot who made sure the family home reflected her English origins. When Anna Symonds Ohlin was still a very young child the family moved to Sweden and she thus grew up in an “English” home albeit in Swedish surroundings. In 1873 her father died when he was only 39 years old, leaving her mother to provide for herself and the family by teaching English. Anna Symonds Ohlin never married and dedicated her life to the temperance movement.

When Anna Symonds Ohlin was 18 years old she became teetotal, abstaining from alcohol and meat for religious reasons: “Doing God’s will, taking my neighbour’s welfare into consideration, formed the basis for the conviction of my belief and the motive for my behaviour”. At the time she was not a member of the temperance movement and had no particular knowledge of the effects of alcohol, whether in a medical or in a social context.

Anna Symonds Ohlin’s mother died in December 1902 at the age of 67. It was only afterwards that Anna Symonds Ohlin began to join organised groups. By February 1903 she joined the Östermalm branch of Vita Bandet and it was not long before she served as its chair. She went on to become a driving force in several of the association’s committees. Indeed, she set up a committee to visit Stockholm pubs in order to connect with those suffering from the most severe alcohol problems. Each week they visited a number of pubs where they handed out pamphlets and invited people to attend their temperance meetings. These outings doubtless required a certain amount of courage. Anna Symonds Ohlin also set up a committee focused on young women who worked in the textile industry.

At the Vita Bandet annual meeting held in Stockholm in 1903 Anna Symonds Ohlin was elected deputy secretary of the organisation’s executive committee. She also represented the Swedish Vita Bandet at the global women’s temperance congress held in Geneva that summer. Thousands of women from across the world met in Geneva to discuss current issues related to abstinence and public morality. Anna Symonds Ohlin was returned to the position of deputy secretary at Vita Bandet’s annual general meeting held in Helsingborg the following year. She also gave a much-noted lecture on female suffrage, subsequently printed as a pamphlet. In it she stated the importance of both male and female perspectives and that their distinct abilities deserved to influence policy. She believed that female suffrage would serve as a means of achieving total sobriety throughout the country and she felt that all female members of Vita Bandet should sign up to this. In her role as deputy secretary she was responsible for the administration at the head office, wrote letters and delegated. During this period Anna Symonds Ohlin also organised around 50 practical courses in cookery and baking, around 30 in sewing and another 20 in child-care, as well as some individual courses in women’s health, in languages, and in organisational skills.

At the major temperance demonstration held in Stockholm on 1 June 1905 Anna Symonds Ohlin gave a speech directed at the women in the audience. Her message was that women held a particular place in “the fight against intoxicating drink”, both in their roles as mothers and in a social context. Women should therefore play an equal role in decision-making in municipal matters. Her speech was a serious one and richly detailed and was received with enthusiastic applause.

Anna Symonds Ohlin gave talks throughout Sweden and participated in several international conferences. She was, however, best known for her personal activism. During these years she devoted almost all of her waking hours to the temperance movement, never once receiving a penny in recompense.

Anna Symonds Ohlin died in 1938 and she was sorely missed after her passing. Her tombstone lies at Norra begravningsplatsen (the Northern cemetery) in Solna. Apart from her speeches and written work, all that is left of her personal possessions is a single doll and its clothes. According to Nordiska Museet she was given the doll when she was five or six years old and she named it May. She kept this doll all her life and it was donated to the museum after her death. 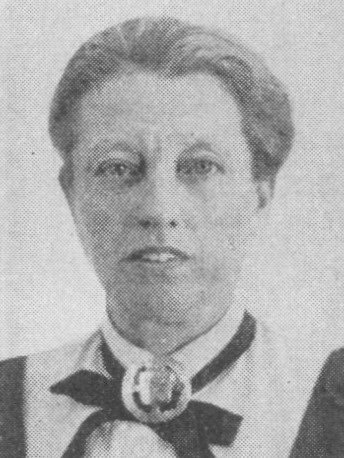