Anna Maria Roos was an author, a poet, and a writer of song lyrics. Her textbooks for elementary school, entitled Sörgården and I Önnemo, left their mark on an entire generation of Swedish children.

Anna Maria Roos came from an upper-class background. Her father, Adolf Wilhelm Roos, was a director general of the post office and a parliamentarian who reformed the Swedish postal system. Despite her family’s wealth Anna Maria Roos experienced her childhood as an unhappy one. She particularly felt that her mother, Sophie Maria Roos née Nordenfalk, was loveless. Anna Maria Roos’ 1901 novel entitled Marika is in part based on her childhood, but the author has revealed in letters that her actual upbringing involved a lot more suffering, both physical and emotional, than what is portrayed in the novel.

Anna Maria Roos had four brothers and thus was the only daughter in the family. Despite her complicated relationship with her mother, the two women lived together until Anna Maria Roos was 43 years old. Following her initial home-schooling, she enrolled at the Åhlin school in Stockholm in 1874. She attended Högre lärarinneseminariet (the advanced teacher-training programme) which, at that time, was really the only further training that was considered suitable for an ambitious young girl. Her friends have testified that she was a voracious consumer of books and that “she was crowned by a nimbus of learning”. Anna Maria Roos did not, however, have a vocational interest in teaching and never worked as a teacher after she graduated.

Anna Maria Roos was possessed of a very versatile artistic talent. Although she could paint, compose, and write, it was her writing which generated most of her income. Her poem “Svalorna” was published in the journal Puck in 1883, and the poem is also included in her first book from 1894 entitled I gryningen. She wrote poems, short stories, novels, travelogues, children’s plays and adult plays, as well as textbooks and literary criticism. She was also a significant force in the public literary scene of her day – for a time she served as editor of Ord och Bild and she was an elected member of the Samfundet De Nio (The Nine Society). Her greatest success came, however, through her children’s poetry. Her first children’s book was Lilla Elnas sagor, published in 1894. The book was named after her niece Elna who had died of scarlet fever in 1893 at the tender age of five. This book already contains what would become Anna Maria Roos’ typical mix of ballads, some of which she had composed herself, poems, stories and short pieces of prose. The poem about “Blåsippan”, a flower found out on the hillsides, was first published in Lilla Elnas sagor. Her childish – in a good way – tone and her direct appeal to young readers and the lack of pointers were all aspects which were relatively rare at that time. The simple, light and joyful aspects of the poetry, particularly as expressed in the ballads, all contributed to the poems’ popularity. Several of Anna Maria Roos’ ballads were published much later in the 1943 ballad collection called Nu ska vi sjunga, such as “Lyckans land”, “Fyra små grisar” and “Tre små gummor”.

In 1895 she released yet another two books, the two-volume children’s book I Hvitavall 1–2, and the short-story collection Tysta djup. The former comprised tales, ballads, and poems and, just like Lilla Elnas sagor, enjoyed largely positive reviews from both critics and readers. Tysta djup was also released in French as Coeurs sauvages, in 1897, and it was Anna Maria Roos who provided the translation. The discussion of women’s qualities and their capacity for love as expressed in the book were concepts of central importance to Anna Maria Roos. She herself never married but her letters and poems mention a brief but intense love affair that she experienced while travelling in 1885, a love that, for the rest of her life, she hoped to revisit. This experience was expressed in literary format in the poetry collection entitled Aderton år, published in 1902.

Anna Maria Roos is best known, however, as the author of two elementary-school textbooks, namely Sörgården and I Önnemo, both published in 1912. They came to influence a whole generation of Swedes. The concept of the "Sörgårdian idyll" still exists as a term of description for the peaceful crofting lifestyle of bygone days. Both of these books were included under the common heading of Hem och hembygd in a major public school textbook project headed by Fridtjuv Berg, the minister of education, and others. The other sections comprised Selma Lagerlöf’s Nils Holgerssons underbara resa genom Sverige, from 1906–1907, Verner von Heidenstam’s Svenskarna och deras hövdingar, from 1908–1910, and Sven Hedin’s Från pol till pol, from 1911.

The texts of both Sörgården and I Önnemo describe farming life as it follows the changing seasons of the year in chronological fashion. The books served as teaching material both in terms of the mother tongue as well as for knowledge of Sweden and its nature. The illustrations, produced by Brita Ellström, Ingeborg Uddén and Stina Beck-Friis, formed significant complements to the text. These images made at least as much of an impact on readers as the text did. The collaboration between Anna Maria Roos and the editorial committee was not without friction, although she successfully pushed her own wishes through when it came to the titles. 1,200,000 copies of Sörgården were printed during the period from 1913–1946 whilst I Önnemo numbered 1,050,000 copies. The books also included appendices containing music. The reviews were largely positive, even though these books, as brand new textbooks, were even at that time criticised for not covering the everyday lives of modern children or the already apparent social changes brought on by urbanisation and industrialisation. The editorial committee had been clear in its instructions, however – kindness, humility, love of the fatherland, and a feeling of homeliness as well as a knowledge of plants and animals were all to be conveyed, preferably in the format of a tale. As late as 1936–1937 requests for an updated version of the textbooks emerged in which the everyday lives of city children and modern transport were given a bit more attention.

Although Anna Maria Roos’ greatest success lay in her output for children and young people, her main personal enthusiasm lay within the religious sphere. Her work entitled Fariseism i våra dagar, published in 1901, contained harsh criticism of the church, which she believed should return to core Christianity. This book garnered a lot of attention and gave rise to a lively debate. Anna Maria Roos was also critical of Luthers lilla katekes which served as a textbook on Christianity for children and she was supportive of the case for women preachers. She took on theosophy and its proponents in her 1913 book Teosofi och teosofer. Her interest in religious history eventually led her towards the occult and Spiritism. She co-wrote the pamphlet Vägen in 1905–1906 with her friend Lucie Lagerbielke, which included the subject of the laying on of hands and healing. This was an art which Anna Maria Roos herself practised during the 1890s in her own surgery in Stockholm.

Anna Maria Roos spent a large part of her life travelling to foreign countries. This was partly due to her health, which from time to time required a different climate than the Swedish one, but was also brought on by a general sense of restlessness and unhappiness. She lived the last ten years of her life abroad, both due to financial reasons and because she wanted to develop her healing of the sick through the laying on of hands technique. The latter had, in 1915, become illegal for laypeople to practise in Sweden. She spent time in Egypt, Palestine, Italy, Germany, and the USA. For a while she lived in Tenerife, where she seems to have enjoyed living. Her last journey was to India, inspired by a calling to help the people suffering there by using her skills in the laying on of hands. 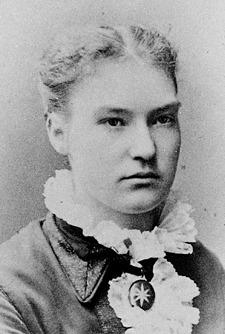