Anna Nordlander was an artist. She painted portraits, depictions of nature and folklife scenes and transformed how the Sami were portrayed in illustrations.

Anna Nordlander was born in 1843. She was the youngest of six children of Nils Nordlander, a parson, and his wife Anna Maria Gestrin, who was herself a cleric’s daughter. Anna Nordlander grew up in an educated and well-to-do home at Skellefteå parish parsonage. She and her three sisters were home-tutored by governesses. The girls also attended the parsonage junior school. In 1850 the artist Johan Fredrik Höckert stayed in the family home on his journey through Lappland. He became the first artist of any significance to portray the nature and folklife of Lappland after making a personal visit to the area. Anna Nordlander was apparently a private student of Höckert’s in 1863 and was much influenced by his Sami motifs.

Anna Nordlander worked as a relief drawing instructor at the new school in Skellefteå during 1864 and the spring term of 1865. She trained at Slöjdskolan (the school of handicrafts, later known as Konstfack – college of art, crafts and design) for a few years before she enrolled at the Fruntimmers-Afdelningen (women’s section) of Konstakademin (academy of art) in Stockholm during the years 1866–1872. Anna Nordlander’s favourite teachers were the history and genre painter August Malmström and Johan Christoffer Boklund, also a history painter. She was a very successful student and in 1869 she was awarded the Tessin silver medal for her work at Högre Antikskolan.

Anna Nordlander travelled overseas in 1873 and 1877 to undertake study trips. She visited Brussels in 1873 where she was a private student of Jean Portaêl, a portrait-, genre-, and history painter. Anna Nordlander was drawn to Paris and painting en plein air so in 1876 she travelled to the French capital city, accompanied by her artist friend Kerstin Cardon. She met Alfred Wahlberg, who painted en plein air, and found him to be “brilliant”. She then studied the masters at the Louvre. During the autumn of 1877 she enrolled at the Académie Julian and studied under Jules Lefebvre and Tony Robert-Fleury.

Anna Nordlander often visited her home town and was registered as living there until 1875 when she, her mother, and an orphaned nephew moved to Stockholm. That same year she acquired a studio for herself where she took on commissions for portrait painting and worked on sketches and ideas inspired by both her home region and her foreign travels.

During her stint at Konstakademin Anna Nordlander had held very successful exhibitions both at the academy and at Stockholms konstförening (art society). The konstförening purchased some of her portraits and genre paintings, such as Spinnande dalkulla, completed in 1872. The following year the society acquired her painting entitled Tillfället gör tjuven and it was displayed in a Nordic art exhibit in Copenhagen. Another work was Fattiga barn, a richly detailed semi-naturalist painting using a brown colour scheme, which was purchased by Stockholms konstförening and then raffled off. The painting was also later displayed at Konstakademin and has been reproduced in the Atelier Jaeger album of Svenska konstnärers tavlor från 1873. Konstföreningen and Konstakademin exhibited Anna Nordlander’s portrait Lappgosse matande hundar in 1877. This painting was deemed to be crisply painted using a good colour scheme.

Anna Nordlander transformed the way in which Sami people – mainly forest Sami which she had been familiar with since childhood – were portrayed. She produced portraits such as Lappflicka and Lappbarn as well as interiors such as Sjuk lapp and Vid hängvaggan. In the latter she used a religious iconographic colour scheme: a young Sami woman wearing a blue ‘kilmössa’ (calotte) – the Virgin Mary’s colour – and a dress in the purest white. Johan Fredrik Höckert used the same theme in a detailed largescale painting. The majority of Anna Nordlander’s paintings are detailed studies in oil, as with Två skidande lappar on a horizon-less landscape with heavy snowfall. In her depictions of the Sami it is not the storyline which is of significance but the purely pictorial element and thus her paintings are freer and more modern in style than Höckert had achieved. Her paintings have a personal feel with their broad brush-strokes, usually in warm colours. It is not known whether Anna Nordlander intended to rework her studies and use them as the basis for larger paintings. She died of tuberculosis in 1879 at the tender age of 34. The student magazine Palett-skrap published Carl Larsson’s tribute to Anna Nordlander in which he noted that she was “the best of all those who completed Konstakademin’s programme in the women’s section’.

Anna Nordlander died in Stockholm in 1879. 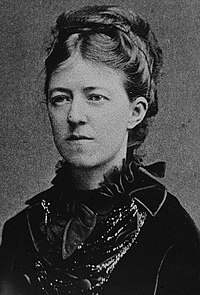