Anna Norrie was the Nordic countries’ leading operetta singer of the 1880s and 1890s. She was also one of the people behind the establishment of Calle Flygare’s theatre school in 1940.

Anna Norrie was encouraged to apply to the Kungl. Musikkonservatorium (royal conservatoire of music) by the Wallin school singing instrucor and – aged just seventeen – she was admitted into Julius Günther’s singing class. Following her appearance in an amateur theatrical production in Södertälje Anna Norrie was invited to go on tour, bur her father would not allow it. Instead she carried on taking singing lessons, first with Carl Fredrik Lundqvist, and subsequently with Fritz Arlberg.

Anna Norrie then took lessons in recitation with the actors Emil Hillberg and Fredrik Dörum. This led to her first two speaking roles at Ludvig Josephson’s and Victor Holmquist’s Nya theatre on Blasieholm in 1882: she played a young girl in Pailleron’s play Gnistan, and a male role as Lars Hjortsberg in Wetterhoff’s En repetition av Tillfället gör tjuven, in which she sang a Bellman ballad. Her performances were so well-received that she was given a fulltime job, performing a series of lead roles within the operetta genre. The first of these was in Offenbach’s operettas Tamburmajorens dotter and Stella, followed subsequently as Ludvig XV in Grisart’s operetta Infantinnans dockor. Her irrepressible tomboyish qualities, charming friskiness, jauntiness, and sometimes extreme comic turns were also popular in operettas such as Tiggarstudenten and Boccacio.

A decisive turning-point occurred in 1883 when Anna Norrie studied both methodology and working discipline at Signe Hebbe’s demanding school. This then led to her first real breakthrough in Victorien Sardou’s Herr Garat, with the theatre directors Richard Wagner and Axel Bosin, who provided better working conditions at the Södra theatre and Djurgård theatre. The three years she spent working at both of those theatres were formative for her as an operetta artist: she appeared in productions including Den sköna Galathea, Lilla helgonet, Yngste löjtnanten, Gasparone, Zigenarbaronen, and Alphyddan.

Anna Norrie spent the period of her first marriage to the author and theatre director William Good Norrie living with him in Copenhagen. She also toured Helsinki, Stockholm, Bremen, Leipzig, Hannover, and Berlin. She only performed twice at the Swedish royal stage: at the Kongl. Opera (royal opera) in 1894 and at the Kungliga Dramatiska (royal dramatic) theatre in 1898. Following her formal retirement from the stage in 1920 Anna Norrie would sometimes still perform, including at the Konserthus theatre in 1932 when she played the speaking part of Queen Desideria in Herbert Grevenius’ Den förste Bernadotten, directed by Per Lindberg. She performed opposite Gösta Ekman.

Anna Norrie was particularly brilliant when she played men’s roles and those of queens. Her performances in these parts were considered natural and free of artificiality despite her extremely accomplished classical acting methodology. In Germany this stood in stark contrast to what was the norm there of burlesque and vulgar portrayals of operetta queens. In Denmark it was noted that she was no ordinary saucy soubrette. Her role portrayals reveal the elegance, finesse, and French art of ‘draperie’ that she had learned from Signe Hebbe. She masterfully conquered the difficult art of parody. Her parody was never clumsy and her comedy was never cynical. Due to her thorough understanding of the style she was parodying she dared to “go the whole hog”. Sometimes the audience misunderstood her due to their own ignorance or prejudices, such as happened with the parody of Gounod’s opera Faust.

Anna Norrie served as a role model within the classical operetta genre to performers including Emma Meissner, Naima Wifstrand, and Margit Rosengren. Inspired by, for example, Sven Scholander Anna Norrie also performed as a ballad singer, sometimes singing what was to her a completely unfamiliar repertoire. Her interpretations of Gustaf Fröding’s songs became her most popular songs. She would perform gripping French ballads in the spirit of Yvette Guilbert with great earnestness. She also sang with Marcelle Legay at Noctambule in Paris.

During the First World War Anna Norrie, now with her second husband Anton de Verdier, moved to Copenhagen. She ran her own literary cabaret there, which was known as Edderkoppen. She was inspired by Paris and the Chat Noir in Kristiania. However, wartime caused financial problems which led to Edderkoppen closing down in 1919.

When she was 73 years old Anna Norrie began a 15-year long teaching career in stage movement at the Kungliga Dramatiska theatre school. She had, to all intents and purposes, borrowed her French-Italian ideals and methods from Signe Hebbe. One of the first requirements she drummed into her students was the importance of clear and pure enunciation, along with skilled movements to allow the body to smoothly and naturally respond to various states of mind. Thought was to be accompanied by movement, which in turn was followed by the spoken word. Her students included Signe Hasso, Ingrid Bergman, Gunn Wållgren, Sif Ruud, Gerd Hagman, Viveca Lindfors, Margit Rosengren, Birgitta Valberg, Anita Björk, Margaretha Krook, Yvonne Lombard, Ingrid Thulin, Gunnar Björnstrand, Sven Lindberg, Claes-Göran Gentele, Ulf Palme, Ingvar Kjellson, Jarl Kulle, Jan-Olof Strandberg and Max von Sydow. Anna Norrie’s successor at the Kungliga Dramatiska theatre school, Ronny Johansson, apparently used the same teaching methods until 1964.

Anna Norrie appeared in eight silent movies and one talkie. A filmed couplet from the 1903 production of Sköna Helena still exists. Three of the seven silent movies filmed at Svenska Bio in the 1912–1913 period were directed by Mauritz Stiller, namely Mor och dotter, Vampyren, and En pojke i livets strid. She also acted in I livets vår directed by Paul Garbagni, Ett hemligt giftermål eller Bekännelsen på dödsbädden and Barnet, both directed by Victor Sjöström, and Skandalen directed by Georg af Klercker. None of these have survived. Anna Norrie, then 49 years old, plays the part of the countess in the still extant 1949 talkie, Greven från gränden, directed by Lars-Eric Kjellgren.

Anna Norrie recorded her first sound phonograph in 1890. She recorded “Säg Venus” from Sköna Helena on Gramophone in 1905 and 1912; she also recorded Gustaf Fröding’s popular poem Jänteblig twice in 1905, as well as his Stina Stursk and Riksdassbönnernas marsch both in 1912.

During her final years Anna Norrie let out rooms within her Stockholm apartment on Hamngatan 23 to Brita von Horn and thus, in her autumn years she – still sprightly – became involved in the latter’s setting up of the Dramatikerstudion. 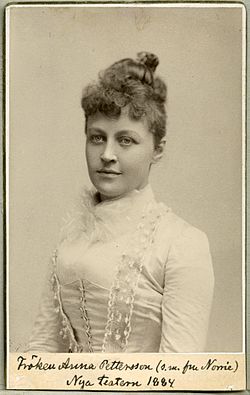