Anna Preinitz was an author and a writer who was active from the late 1800s–early 1900s. She also engaged in philanthropic efforts in support of female factory workers.

Anna Preinitz was born in Stockholm on 20 December 1870. She was brought up in a religious home and began attending Sunday School at an early age. Her father, O.K. Hellström, was a builder who was active within the church and ran a Sunday School in their home for a group of street boys on Kungsholmen. Anna Preinitz attended these gatherings as a child and when she was 14 years old she led a Sunday School class herself. She took inspiration from her religiously active parents and her adult life came to be characterised by her Christian spirit and philanthropic interests.

Anna Preinitz took great interest in music and played the organ, which formed a central element within her work at the Sunday School at Nytorget on Söder in Stockholm. She was also interested in literature and wrote poems and stories for the Sunday School, some of which were published in the Sunday School journal Barnavännen, as well as in Christmas calendars and other children’s journals. She didn’t just write for children but also produced work intended for an adult audience. Her output was always permeated with spirituality and her Christian faith. She published two poetry collections, Böljeslag in 1896 and Mot höjden in 1907. She also released three story collections: Solvik in 1906, and Den eviges vägar and Mors lilla solstråle, both published in 1908.

Anna Preinitz was a member of the southern section of the Christian women’s association KFUK, for which she served as a board member for a decade. Her engagement on behalf of the KFUK involved supporting female factory workers. She continued this focus within her activities on behalf of the Vita Bandet (white ribbon) temperance society. She was a member of the northern Vita Bandet association in Stockholm and from 1904 served on its national executive committee. She continued writing whilst undertaking work on behalf of Vita Bandet and, from 1909–1912, also served as editor of the Vita Bandet journal. She was also involved in developing and publishing the organisation’s songbook, for which she also wrote her own song lyrics or provided translations. The journal also published many of her poems, as well as opinion-forming articles about the living conditions of female factory workers.

Anna Preinitz was driven by her Christian and social empathy for women who worked in the industrial sphere. She set up ‘Avdelningen för arbetet med fabriksarbeterskorna’ (the department for working with factory women) within Vita Bandet and in the southern section of the Stockholm Vita Bandet association she set up a sister branch for female factory workers, which met within the KFUK’s premises. On behalf of Vita Bandet she organised meetings and talks and discussion nights with singing and music and courses on things like essay-writing and book-keeping aimed at the female factory workers. She travelled across Sweden to visit factories where she would speak to the female staff about a life of sobriety. On these tours she would hire or borrow premises for her meetings to which local female workers were invited and at which they were provided with a simple meal. She was careful to treat them as equals. It was through these meetings and the conversations she had had with the women that she learned of their harsh living conditions and noted their need for rest and recreation. She wrote about this in the Vita Bandet journal and emphasised the importance of offering these women skills through courses and holiday recuperation through sending them to rest-homes.

Anna Preinitz supported local associations throughout Sweden by supplying them with information and suggestions for holding courses. She set up the Vita Bandets Vilohemsfond (rest-home fund) in order to raise money to build a rest home for female factory workers. Although she was able to use the collected funds to purchase a plot of land near Skuru in the Stockholm archipelago she fell ill and died before the construction of the rest-home began. “The department for supporting female factory workers” was taken over by Gerda Meyerson and Vilohemsfonden was then used to supply financial support to the rest- and holiday homes which were established by about 20 Vita Bandet societies.

Anna Preinitz was driven by her empathy for all hard-working women who did not have all the benefits that she enjoyed. Her Vita Bandet colleagues lauded her contributions on those women’s behalf and described Anna Preinitz as joyful, energetic, and determined. She was considered to be a successful poet and her lyrical work formed a focal cultural element of the Vita Bandet journal. Following a period of illness Anna Preinitz died, aged only 41, at Sophiahemmet in Stockholm in 1912. She is buried at the Norra cemetery in Solna. 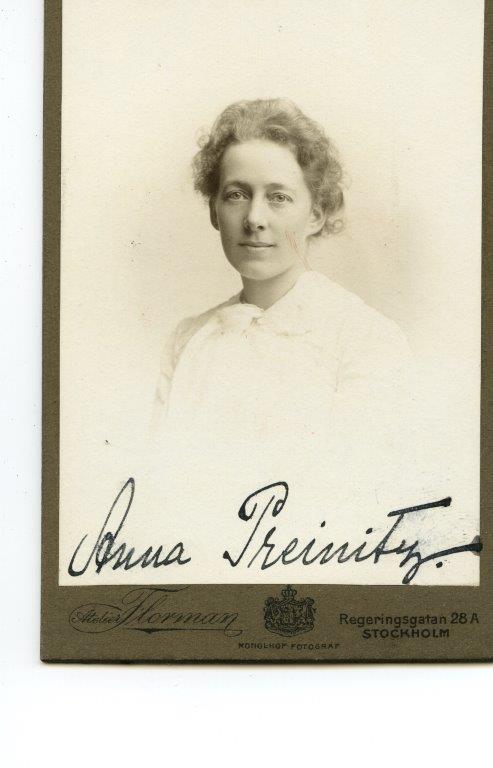