Anna Cederström spent her childhood in a manorial environment in Uppland. As an adult her main concern was to conserve nature around the Fredrikslund and Kungshamn farms, which lie near lake Mälaren to the south of Uppsala.

Anna Cederström was born at Fredrikslund farm in 1878. She was the youngest child of Baron Carl Cederström and his wife Anna Skjöldebrand. Her parents had noble ancestry and enjoyed close relations with the Swedish royal court. Her mother, whose father had owned ironworks in Borgvik in Värmland, had served as a lady-in-waiting to both the dowager Queen Josefina and Queen Lovisa. Anna Cederströms parents met each other when her father was serving as a royal chamberlain and they subsequently got married at Stockholm palace in 1873.

Her paternal grandfather was the patriarch Carl Emanuel Cederström. In 1892 he died at the family seat, which was the property of Krusenberg. His wife, Theresine af Ugglas, had been given Krusenberg as a morning gift upon her wedding in 1840. On the death of her husband the eldest son, Carl (namely, Anna Cederström’s father), inherited Fredrikslund and Kungshamn farms by Mälarviken Ekoln. All three manors were located in Alsike parish within Stockholm county (now Uppsala county and Knivsta municipality). Krusenberg went to Carl’s brother, Emanuel, who lived there as a bachelor until his death in 1920. Emanuel had been active in the local history movement and had been a collector of antiques. Carl’s other brother, Gustaf Cederström, became a well-known artist who depicted historical motifs and he received his inheritance as a financial payment.

Anna Cederström decided by the age of eight that she was not going to get married. She worshipped her father but had a more complicated relationship with her mother. Her mother was a reserved and austere individual who lacked warmth. In the autumn of 1887 the family, now comprising the three siblings Charlotte, Rudolf, and Anna Cederström, left their life at the manor and exchanged it for an apartment in Östermalm in Stockholm. Anna Cederström found it painful to leave Fredrikslund and never settled into life in the capital. She hated her mother’s involvement in what she perceived as the artificial courtly environment. She much preferred life in the country and her father’s agrarian interests.

As a child Anna Cederström had been home-schooled by a governess. However, following the move to Stockholm she was enrolled at Brummerska skolan (school). She suffered lengthy periods of ill-health, including Scarlet fever and headaches. Nevertheless, she made a friend for life in her classmate Elsa Almgren, who later married Johan Stiernstedt of Risberga, in Östuna parish, not far from Anna Cederström’s childhood home.

Anna Cederström was an independent and demanding pupil at school. With regard to religious matters she always adopted a liberal stance but she was not uninterested in reading the Bible and religious traditions. Her questioning of Christianity originated in the great value she placed on morality and logic. Although she took a radical approach to moral issues she remained quite conservative when it came to matters of culture and nature conservation.

In 1898 Anna Cederström and her elder sister Charlotte were presented at the Swedish royal court before Queen Sofia, who asked the two girls whether it would not be a delight to make their formal debuts. Anna Cederström quietly determined that she would not sit and wait for some lieutenant who would never come. The arranged marriages of the nobility and high society were to be avoided. Instead of attending balls and courting Anna Cederström opted, in 1899, to travel to Great Britain in the company of some female friends. She then spent some time at a domestic sciences school, took up weaving, and attended a course held at Agdatorps trädgårdsskola (horticultural college) in Blekinge.

The Cederström sisters’ chosen way of life went against the preordained route of becoming a married woman. Charlotte trained as a nurse and Anna Cederström graduated as a teacher from Anna Sandströms skola in 1905. In gaining her qualification she had focused particularly on the natural sciences. She often attended lectures on geography and geology held at Stockholm college (now Stockholm university).

Her first teaching job was at Brummerska skolan and it lasted from 1905–1909. In addition to working as a teacher she continued to study biology and zoology at Stockholm college. In the autumn of 1909 she began a teaching position at Karlskoga samskola where she stayed until 1912. That year she started working at Gothenburg högre samskola. However she did not stay long there as she never settled. In contrast Anna Cederström thought fondly of her time at Karlskoga and she stayed in touch with pupils for years afterwards. Anna Cederström was an unconventional teacher who had a lively manner. She brought her teaching career to a close following two stints at the female teacher-training programme Anna Sandströms högre lärarinneseminarium in 1914–1919 and then in 1922–1923.

Anna Cederström’s mother died at Fredrikslund in the autumn of 1912. For nearly three months during 1918–1919 Anna Cederström struggled to fight off a case of the Spanish Flu, followed in 1920 by a bout of diphtheria. Her weakened state of health led to frequent visits to health spas. Anna Cederström’s life took a definitive turn following the death of her beloved father in 1925. Her sister Charlotte, who had cared for her father during the years leading up to his death, took over Fredrikslund. Anna Cederström negotiated with her brother Rudolf and then bought him out of Kungshamn, finally moving there in 1926. Over the years a number of different relatives had lived at Kungshamn and the property needed to be spruced up. Anna Cederström then became a proper manor owner, taking on all the requisite responsibilities, including managing staff and running the farm. She ran a tight ship at Kungshamn, was nicknamed “the prime minister”, and uninvited guests made themselves scarce.

Anna Cederström was an animal lover who was especially fond of dogs and birds. When it came to socialising she preferred the company of men. She took an interest in the welfare of local young boys who lived in workers’ housing and during the war she cared for two Finnish war-refugee children. She also worked with a scout group in Uppsala, named Wasakåren, for whom she had a summer cottage in Djupviken refurbished for their exclusive use.

However, the most significant contribution Anna Cederström made was efforts in nature conservation. She was a member of Svenska Naturskyddsföreningen. She had specific plans to conserve the environment around Kungshamn, Morga, and in Fredrikslund by setting up a trust. This trust, set up in 1941, is called Stiftelsen Friherre Carl Cederströms Minne and its aim is “to protect a piece of mid-Swedish cultural heritage through nature conservation for the benefit of future generations”. Anna Cederström had to fight hard to get her own way. She served as the trust’s first chair, tackling the role meticulously and with great energy. Nature conservation was always considered more important than financial concerns and several conflicts arose when she put up opposition to those seeking to exploit the terrain and to build roads in vulnerable natural spaces.

Whilst Anna Cederström was often angry about developments which contravened her principles she nevertheless had a gentle and friendly side to her when dealing with individuals who faithfully discharged their duties. Her two priorities remained the farm and nature. Anna Cederström was held in great respect by the scouts, local pastors, and other cultural figures within her social circle, although as the years passed she became increasingly eccentric. She spent her final years at the Samariterhemmet hospital in Uppsala, an institution which had been founded by her friend Ebba Boström.

Anna Cederström died in 1965. She was buried without ceremony at a beautiful spot near Kungsham, close to the stately pines on a hill in a natural reserve which she herself had founded. 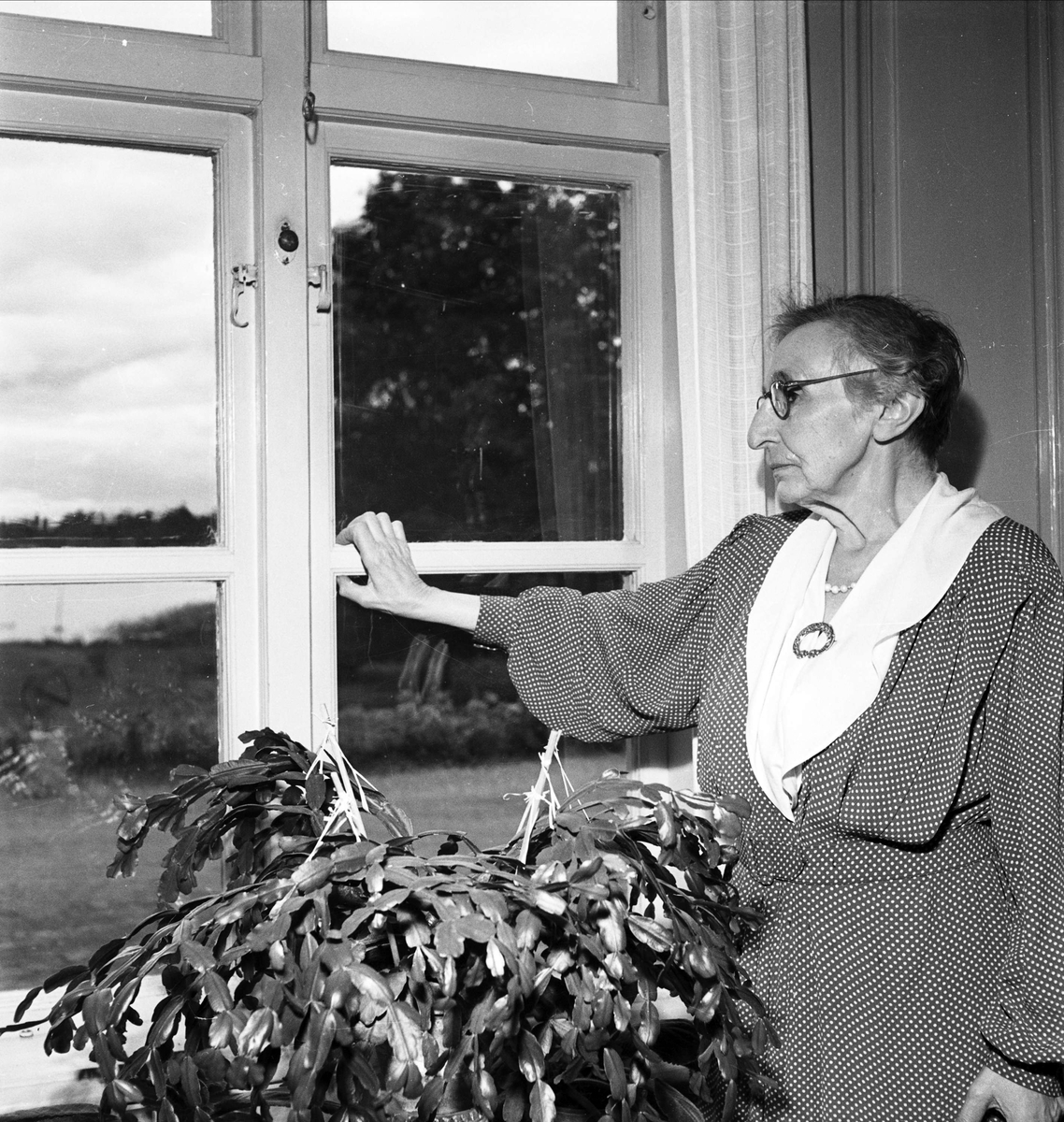