Anna Warburg was one of the leading figures in developing kindergartens in Sweden.

Anna Warburg was born in Stockholm in 1881. Her father was a German Jew who had left his native country in order to settle in Stockholm. Her mother belonged to a Swedish Jewish family. Anna Warburg was the third child in a family of four siblings. She attended the Whitlock co-educational school, a reform pedagogical school which was also attended by Ellen Beskow at the time. Anna Warburg developed an interest in pedagogics at an early age and after receiving an invitation from relatives she travelled to Hamburg to work in families. She subsequently trained as a kindergarten teacher at Pestalozzi-Fröbel-Haus.

When she returned to Sweden from Germany one of Anna Warburg’s places of employment was the Engelbrekt parish nursery, where she spent three years. She was deeply disheartened by the terrible conditions she found at the nursery with around 30 children. New-borns and school children were crammed together in two small rooms. Anna Warburg would later come to focus on setting up so-called public kindergartens aimed at poor children, which offered them a pedagogic service. She started this work with a public talk in Grängesberg, which led to the establishment of a kindergarten there in 1904, supported by the Grängesberg Company. Anna Warburg ensured that the person appointed as the kindergarten’s director was trained at the Fröbel institute in Norrköping with Ellen Moberg and Maria Moberg. Anna Warburg believed that the Fröbel method, as it had been developed in Norrköping, was a guarantee of good practice focused on serving poor children. Anna Warburg, like Ellen and Maria Moberg, became a keen supporter of setting up public kindergartens instead of those which Anna Warburg viewed as luxury kindergartens for the well-off.

Anna Warburg married her relative Fritz Warburg in 1908. He was a banker from Hamburg and the couple settled there. They had three daughters and were members of the city’s wealthy citizens. This was an unfamiliar lifestyle for Anna Warburg as she herself had grown up in simpler conditions and she decided to make social contributions of various kinds. Anna Warburg was active in the German kindergarten movement and set up a Volkskindergarten in Hamburg in 1910. She was the chair of the enterprise and was on the board of a training programme for kindergarten leaders. She also maintained contact with Sweden and made promises to donate funds in order to establish a kindergarten associated with the Husmodersskola (housewives’ school) in Stockholm. The funds she offered were dependent on the condition that the director of the kindergarten was to be trained in Norrköping. She campaigned for the development of crèches with trained kindergarten staff and also submitted contributions to Svenska Dagbladet.

During the First World War her family lived in Stockholm. Anna Warburg was a central figure behind the founding of the Swedish Fröbel federation in 1918; the federation was founded at a meeting in her home. She was appointed chair of the federation and was present at the first annual general meeting, but she had to resign when she moved back to Hamburg with her family. She continued to be active as a contributor to the federation’s journal and submitted articles and book reviews. She also kept up an intensive correspondence with various members. Following Hitler’s rise to power in Germany in 1933 Anna Warburg’s membership of the German Fröbel federation was rescinded. She then founded a training programme for female Jewish kindergarten leaders. She also provided a shelter for Jewish children at her family’s summerhouse. The conditions in Germany made it increasingly difficult to work there and in 1938 Anna Warburg and her family emigrated to Sweden.

The family became centred around Stockholm. Anna Warburg became a significant figure in the kindergarten movement due to her enthusiasm, her network of contacts, and also due to her financial support, which came from her personal wealth. Two of her daughters also devoted themselves to the kindergarten movement. One of them was trained at Pestalozzi-Fröbel-Haus, the other was trained at the social pedagogical training programme in Stockholm. In their autumn years Anna Warburg and her husband moved to Israel, following two of their daughters’ earlier move there. 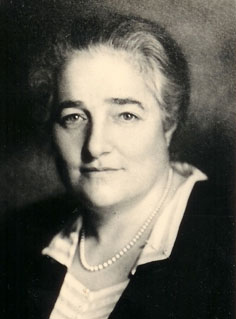