Anna Whitlock was a successful director of a school, a pedagogue, an activist within a co-operative, and a liberal politician in Stockholm. She was also one of the leading figures of the female suffrage movement in Sweden. Her radical social views and enthusiasm for change played fundamental roles in all of her various activities.

Anna Whitlock was born in Stockholm in 1852. Her father, Gustaf Whitlock, was a wholesale merchant who went bankrupt during the 1860s. This meant that her mother, Sofie Whitlock, then became responsible for providing for the family. She worked as a translator, a proofreader, and a manuscript editor. She was also secretary of Fredrika-Bremer-Förbundet (association). Later, using an inheritance as her initial capital, Sofie Whitlock began to deal in selling plots of land and houses. She was particularly keen on having small, affordable apartments built for self-sufficient women living on low incomes.

Anna Whitlock’s education began at the school run by the Misses Pontus in Stockholm. She then attended a pre-school. She was described as an unruly child whose outbursts sometimes took violent form. She was then sent to a Västerås finishing school for girls to give her family some peace. She was considered to be a very gifted student at the boarding school albeit prone to strange moods and not particularly lovable. Anna Whitlock later hinted that the years before she was confirmed were the darkest of her life.

A new era of Anna Whitlock’s life began once she left the finishing school and returned to live at home. In 1869 she enrolled on the so-called Rossander course, a follow-on to the Lärokurs för fruntimmer (teaching course for women), which was a course for mature women and in itself a precursor of Högre lärarinneseminariet (the advanced female teacher-training programme), the first state-run women’s training institution in Sweden. On the course run by the Misses Rossander Anna Whitlock met Ellen Key who came to have a significant impact on her life, both personally and professionally/educationally. Anna Whitlock also gained her first job as a substitute teacher at the Adolf Fredrik public school at this time. She then went on to put her pedagogic skills to the test as a private teacher in Finland. In the summer of 1872 she returned to Stockholm where, in the autumn, she enrolled as a student at Högre lärarinneseminariet. She graduated three years later with top marks.

Anna Whitlock then spent a few years in Switzerland, Italy, and France, undertaking pedagogic and language studies, whilst also serving as the Paris correspondent for Aftonbladet from 1877–1878. Upon her return home in 1878 she founded her own girls’ school in Stockholm. In 1893 the school was transformed into a co-educational school, known initially as Stockholms nya samskola and later, from 1905, as Whitlockska samskolan. The school based its curriculum on what at that time were considered to be radical ideas. One of the important principles was, for example, that the school was to take a neutral stance on religion. The natural sciences, as well as practical subjects such as handicrafts and physical education, figured heavily and the students were allowed to choose between different subjects and to alternate between theoretical and practical tasks. Both boys and girls received school cookery lessons, as well as sewing and woodworking, and sexual education.

Anna Whitlock’s pedagogic ideology also included taking an active role in popular education organisations. She frequently gave talks, particularly at the Stockholms Arbetareinstitut (workers’ institute) in which she became involved in 1882. She joined the radical student group Verdandi in Uppsala in 1886 and wrote one of the first publications published as part of the Verdandi series of tracts. She, along with other liberal conservatives or radical pioneers of the women’s movement, set up the so-called Tolfterna in 1892. This was a group of 12 women from different social classes and of various professions who met to listen to talks and hold discussions in an attempt to cross class boundaries. Anna Whitlock was also an active member of Föreningen Studenter och Arbetare (students’ and workers’ association) as well as Centralförbundet för socialt Arbete (central association for social work), which was established in 1903. This organisation instigated and pushed issues which were later adopted by the modern welfare state.

Whilst Anna Whitlock successfully ran her school until 1918 she was also very active within a variety of other domains. She served as chair of Landsföreningen för kvinnans politiska rösträtt (national association for women’s suffrage) from 1903–1909 and from 1912–1914. She set up Kvinnornas andelsförening Svenska Hem (Svenska Hem women’s cooperative society) which became the largest consumer organisation in Sweden, with a total of five shops and over 3,000 female members, many of which were well-known figures. Anna Whitlock was also active within Frisinnade landsföreningen (national association of the Liberal people’s party) and Frisinnade Kvinnor (Liberal People’s party women). When the Liberal People’s party split in 1923 she joined the liberal party. In 1918 she was awarded the royal Illis quorum medal.

Anna Whitlock never married. She had an adopted daughter named Helga who worked as a teacher at Anna Whitlock’s pre-school before she married Helge Silverstolpe in 1905.

Anna Whitlock died on 16 June 1930 in her own home. Her will stipulated that 200,000 kroner was to be used to establish a fund called the Anna Whitlocks Minnesfond. This provided stipends to low-income, well-behaved, scholastically-gifted, and hard-working youths who attended the Whitlock coeducational high school and advanced classes.

Anna Whitlock is buried at the Norra cemetery in Solna. 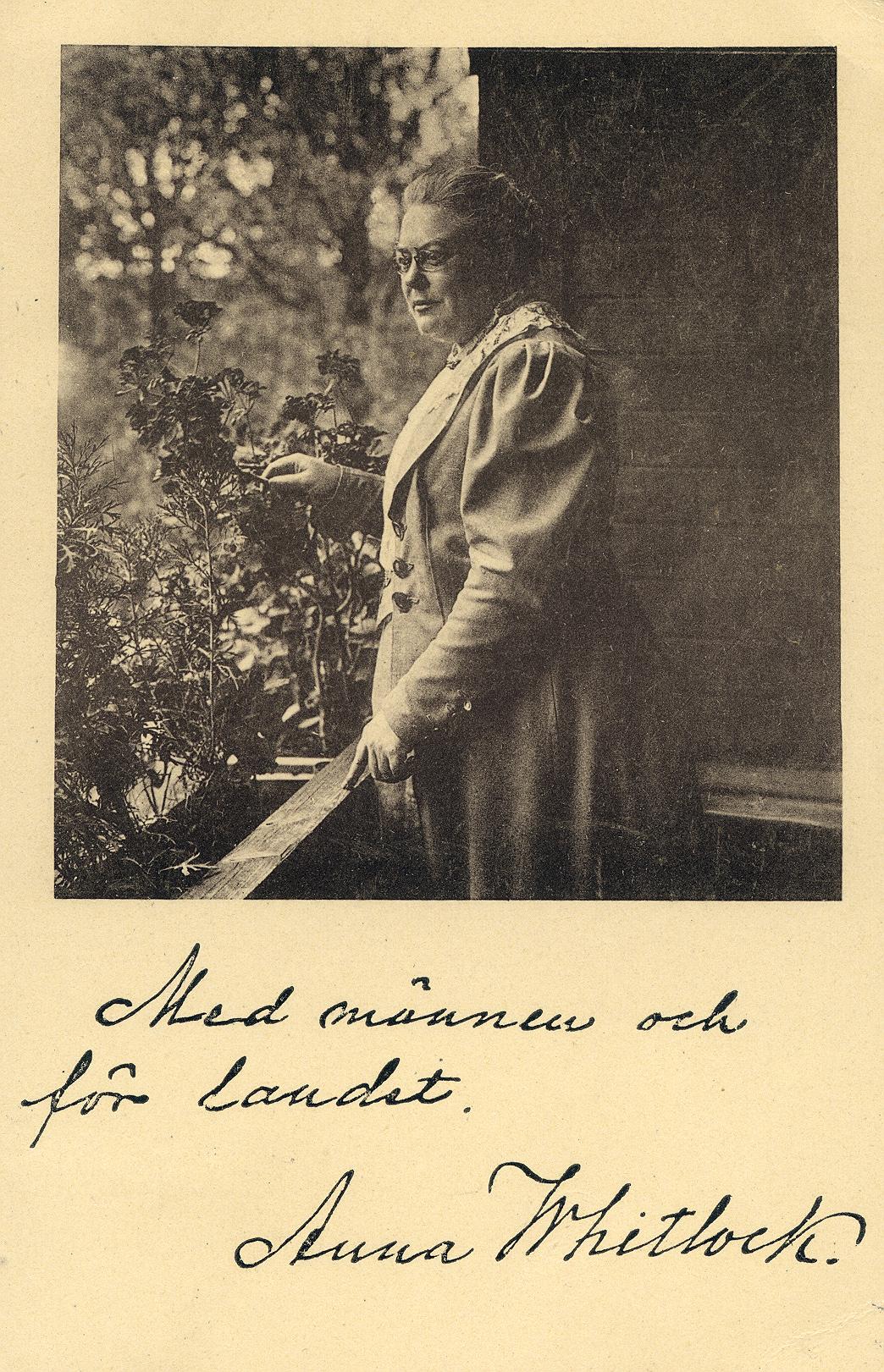