Astrid Aagesen was one of the pioneers of modern Swedish metalwork. She had her own company in Helsingborg including her workshop and boutique. Her work in silver, tin and bronze contributed to her firm Aktiebolaget Astrid M. Aagesen’s fame far beyond the borders of Sweden.

Astrid Marie-Frederike Aagesen was born in Denmark in 1883. She grew up in Silkeborg on Jutland as one of six children. Their father ran an inn and their mother ran their home. Astrid Aagesen was artistically inclined and aimed at first to become a sculptor. However, when she moved to Copenhagen around the turn of the century, she started training to be a silversmith instead. To earn her living, she worked at first as a maid servant, but in 1903 she was able to call herself an apprentice metalworker. She studied at the women’s college Tegne- og Kunstindustriskolen for Kvinder and the technical college Tekniske Skole, both in Copenhagen. Her studies opened the way to a place at several of the silver- and goldsmiths’ firms in Copenhagen. It was as a journeyman working for the pioneer smith Mogens Ballin that she was able to submit her master piece for evaluation after four and a half years. Astrid Aagesen qualified as a metal chaser in 1911 after which she chose to travel abroad. In Stuttgart, she became acquainted with one of Germany’s most exuberant and progressive artistic cities, not least in the field of metalwork, through the Würtembergische Metallwarenfabrik (WMF) that even then was one of the oldest and biggest companies in the region.

After having returned to her homeland and remained for a few more years in Copenhagen, Astrid Aagesen chose to move to Helsingborg in Sweden in 1918, where she had just been appointed as the forewoman at a goldsmith’s workshop. Her thoughts of starting her own company were however soon to become a reality. Her company was founded in 1920 and given its owner’s name. It was a small workshop and Astrid Aagesen was the only employee. Right from the beginning, she specialised in working with tin, a metal that had been neglected for a long time at that point, by both designers and customers. She opened her shop Konstboden at the beginning of the 1920s and there the residents of Helsingborg could botanise among arts and crafts objects of all kinds, made by creative women and men from first and foremost the Swedish province of Skåne. The quality was high throughout, and Astrid Aagesen’s shop was a retail outlet for among others Märta Måås-Fjetterström’s carpets. Märta Måås-Fjetterström was one of all the creative people with whom Astrid Aagesen became friendly after moving across the Sound. She also socialised early on with among others Albert Abbe, Per Siegård, Gösta Adrian-Nilsson (GAN) and the couple Hugo and Esther Gehlin.

After Astrid Aagesen’s own products had awoken the curiosity of the crafts association Svenska Slöjdföreningen, several pieces were selected to be shown at the Jubilee Exhibition in Gothenburg in 1923. Her close contacts with Gregor Paulsson and Åke Stavenow at Svenska Slöjdföreningen continued. In 1925, the Paris Exhibition took place. Astrid Aagesen was once again represented among what was considered the best and most modern in Swedish arts and crafts. This was without a doubt very beneficial for her young company, and Astrid Aagesen was awarded a Grand Prix for her works. This was not however only thanks to her own merits. True enough, she had designed most of the models herself, but she had also cooperated with others. The Danish sculptor Ivar Johnsson designed a number of objects for Astrid Aagesen in the 1920s, among them a biscuit tin that was purchased by the Nationalmuseum in Stockholm. Other examples are Arnold Salomon-Sörensen, later the city architect in Höganäs, and Hugo Gehlin, who both designed engravings and objects.

Apart from objects in tin, bronze and silver for private customers, Astrid Aagesen worked intensively on special assignments, not least for churches. The assignments built up and by her side a young man by the name of Göte Bergsten was soon seen. In due course, he was made technically responsible. Göte Bergsten and Astrid Aagesen together created several public works in Helsingborg. One example is the sculpture Allvar in 1929, constructed exclusively out of snow in the main square Stortorget. The best-known work is however the fountain sculpture Tycho Brahebrunnen in 1927, that Astrid Aagesen was instructed to create according to the design by the architect Gustaf Wilhelmsson Widmark. Hugo Gehlin designed the archangel models for the fountain’s globe and Göte Bergsten carefully chased the star reliefs designed by Astrid Aagesen. The reliefs awoke great attention since they portrayed several local celebrities, among them Astrid Aagesen herself, as could clearly be seen when they were finally completed. The design was declared to be a coup and was written about all over the country, although not always in positive terms. Even the international press sat up and took notice.

Astrid Aagesen often followed her nose, but nonetheless was aware of contemporary artistic currents. During the firm’s first decade, objects were often designed in neo-classical style, internationally known as Swedish grace. The surface was often smooth and the hammered structure that at that time was still common, especially in Denmark, was completely rejected. Classical characteristics were however also to be seen in her work for the Stockholm Exhibition in 1930, even though a good deal was stripped down and simplified in line with the striving of functionalism to be expedient. At the Stockholm Exhibition, visitors were able to see a large collection of objects by Astrid Aagesen and among others several objects decorated with engravings designed by her friend Gösta Adrian-Nilsson (GAN). Several other international exhibitions followed during the 1930s after her participation in Paris, Barcelona and the USA during the 1920s.

In Helsingborg, Astrid Aagesen’s Konstboden and workshops moved to various addresses, such as Drottninggatan, Springpostgränden, Kullagatan and Norra Storgatan, before Astrid Aagesen moved away from the town in 1937 and settled at Smedjetorpet in Halland. The company was closed down the same year as the second world war began, but Astrid Aagesen’s home continued to be an institution for the region’s artists. In one wing, she had furnished a small workshop and in the summers, she ran a shop in Båstad. After she had moved in 1953 to Grevie and in 1958 to Vejbystrand, her little business continued eventually as a gallery. There she showed works by young and established artists and designers. Among those represented may be mentioned the silversmith Wiven Nilsson and the glass artist Bengt Orup. Astrid Aagesen herself, long since retired, worked on applications in metal, a type of art on the border between traditional art and handicraft. She was artistically active to a high old age. Just before her death, Astrid Aagesen had an exhibition that received much attention at the St Nicolaus Gallery, and also delivered a metal application to the Maria parish hall in Helsingborg. 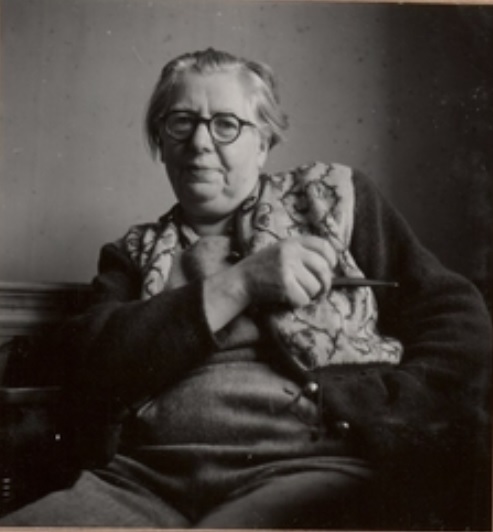