Augusta Christie-Linde was a Swedish zoologist who focused on marine fauna and who was an expert on ascidians of both the Nordic and Arctic regions. She worked at Stockholm college and at the National Museum of Natural History.

Augusta Christie-Linde was born in 1870. She grew up at her parents’ farm, Ernebäcks gård, near Vingåker. Her parents were Anders Andersson and Augusta Larsson. Augusta Christie-Linde gained her school-leaving certificate in Örebro in 1888. She then enrolled at Uppsala university from which she received her Bachelor’s degree in January 1892.

During the period of 1892–1894 Augusta Christie-Linde was employed as a teacher, initially at the girls’ school Söderhamns elementarläroverk för flickor in Hälsingland, then in Stockholm at Lyceum för flickor from 1892–1894 and at the Whitlock coeducational school from 1893–1894. She then continued her studies at Stockholm college zootomy department. Augusta Christie-Linde got married in 1898 to a man who was 22 years her senior, Edvart Eilart Christie-Linde. He was a lawyer and had a Bachelor’s degree in literature. Four years after their wedding their son Vilhelm Anders Christie was born.

Despite starting a family Augusta Christie-Linde continued her academic career. She was an active member of the vibrant academic environment at the zootomical department, colloquially known as “Zootis”, which had been set up in conjunction with the establishment of Stockholm college in 1880. Around the turn of the 1900s the department was located at the Kungsgatan-Vasagatan crossroads and was run by Wilhelm Leche, professor of zoology. Despite this being a relatively limited environment – the professor had just a few teachers and researchers – the department appears to have attracted quite a number of students. These students included several women, such as Albertina Carlsson, Siri Öhngren Hallström, Tony Bonnier, and Gertie Söderberg.

As an assistant in the department Augusta Christie-Linde formed an integral part of the scientific sphere within the department whilst also actively teaching and thus – as the first woman in that position, directly appointed by Professor Wilhelm Leche – she generated an amount of attention and even some negative reactions from some of her male colleagues.

Augusta Christie-Linde was one of the first to gain her doctorate at the department following the decision in 1904 to allow Stockholm college to award doctoral degrees. In 1908 she defended her thesis entitled Der Bau der Soriciden und ihre Beziehungen zu andreren Säugetieren. She was awarded her licentiate that same year and her doctorate in 1909. Augusta Christie-Linde published her first article in 1900 and her early scientific work primarily concerned the anatomy of mammals and their functions. Fairly soon afterwards, however, she began to focus on marine life and particularly on what became her specialism, namely tunicates and the class known as Ascidiacea. Given the hundreds, and probably thousands, of different species living at various depths of the sea this was an extremely wide and technically challenging field to research. Augusta Christie-Linde rapidly became one of the leading experts in Nordic, Arctic and Antarctic ascidians, and undertook a pioneering study particularly of the Swedish varieties. Her scientific articles, of which there are around thirty, were published in not only Scandinavian but also German and English specialist publications. She also published several academic monographs dealing with, for example, the marine milieus of the North and zoological collections held by Naturhistoriska riksmuseet in Stockholm.

It was also at Naturhistoriska riksmuseet that Augusta Christie-Linde served from 1916 until 1940 as an “extra” (ie, not full-time) zoologist within the invertebrate section. For shorter periods she also fulfilled the role of curator and museum assistant at the same place. In 1917 she was awarded a stipend from the Royal Swedish Academy of Sciences, namely Letterstedska understödet för särskilt maktpåliggande naturvetenskapliga undersökningar, which allowed her to undertake studies in the field. However, Augusta Christie-Linde, both before and afterwards, undertook various study tours and field trips both within Sweden and across various parts of Europe. This led to an intense exchange of scientific correspondence and the building of a significant international network of contacts.

Augusta Christie-Linde died in 1953. She was buried at Norra begravningsplatsen (the Northern cemetery) in Solna. At her funeral speeches were made by Professor Nils Odhner of Naturhistoriska riksmuseet and Professor Erik Hultén of Stockholms naturvetenskapliga förening, amongst others. 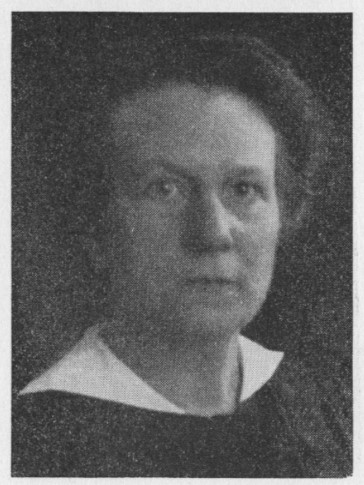