Baptista Mijares-Schreiber was a circus artiste, horsewoman and circus director.

Baptista Mijares-Schreiber was born on 6 April 1886 in Stockholm, the daughter of Bertha Lindberg and Johan Baptist Schreiber. Her father was a circus artist and rider and a circus director from an Austrian family but born in Belgium. Her mother was an actress from Stockholm. Her father died at the early age of 33 years old, of pneumonia. Her mother continued with the children to live a circus life. When Baptista Mijares-Schreiber was five years old, she made her debut as a tightrope dancer and just before the turn of the century 1900, her mother revived the family circus with her new life companion. Baptista Mijares-Schreiber and her brother Jean Schreiber became the main attractions in various riding numbers.

In 1909, Baptista Mijares-Schreiber left her mother’s circus company to be a jockey rider with Circus Albert Schumann in Berlin. She stayed there for a year or so and was among other things an expert at various leaps up from the ring onto the horses’ backs, but she injured herself during a guest appearance in Vienna and was no longer able to carry on with that type of number. She trained anew as a school rider and purchased a school horse with which to start performing. In 1912, Baptista Mijares-Schreiber was working for the Circus Ciniselli in Köpenhamn. There she met the Danish tenor and actor Otto Detlefssen, who was to be her first husband. In 1913, Baptista Mijares-Schreiber’s horse was poisoned and died under mysterious circumstances. Lord Lonsdale, who had been at the circus when the horse died and who was the widowed queen Alexandra’s confidant, decided with the queen to organise a gala performance in aid of a new horse for Baptista Mijares-Schreiber. The time around the first world war demonstrated Baptista Mijares-Schreiber’s broad competence – she worked as a school rider, actress, cabaret singer and operetta prima donna in Denmark and Sweden. In certain of her numbers, her husband also participated as a singing cowboy.

One of the climaxes of the performance was the Mijares brothers’ tightrope dance number, and the circus expanded. In 1933, Baptista Mijares-Schreiber’s husband Chuy Mijares started to spend more time on administration, but the couple still drove their horses in the ring. At the end of the 1940s, the modest tent circus had expanded into a gigantic circus with several rings. However, in 1950 the one-ring circus was reinstated. In 1955, the circus took place for the last time. Baptista Mijares-Schreiber was skillful at enthralling her audience every time she rode, drove her horses or gave a speech in the ring. She was a master of getting her audience in Sweden to believe that their town in particular was close to her heart. Baptista Mijares-Schreiber was a great company director, and she knew just how to create publicity about her enterprise.

Baptista Mijares-Schreiber was also a convinced friend of animals who never tolerated the slightest neglect when it came to her horses or dogs. This was demonstrated for example by the fact that she applied to bury her beloved horse Menelik in the churchyard in Karlskoga. She was denied this and Menelik was buried instead outside the church wall at the forest cemetery at Rävåskullen in Karlskoga. This place is still today marked and the so-called horse grave is advertised by the municipality as an attraction. The memory of the circus and of Baptista Mijares-Schreiber and her deeds also continues to survive in the form of the so-called horse roundabout, close to where her circus once was situated – a roundabout on which a local artist has erected a statue of three bucking horses on their hind legs. 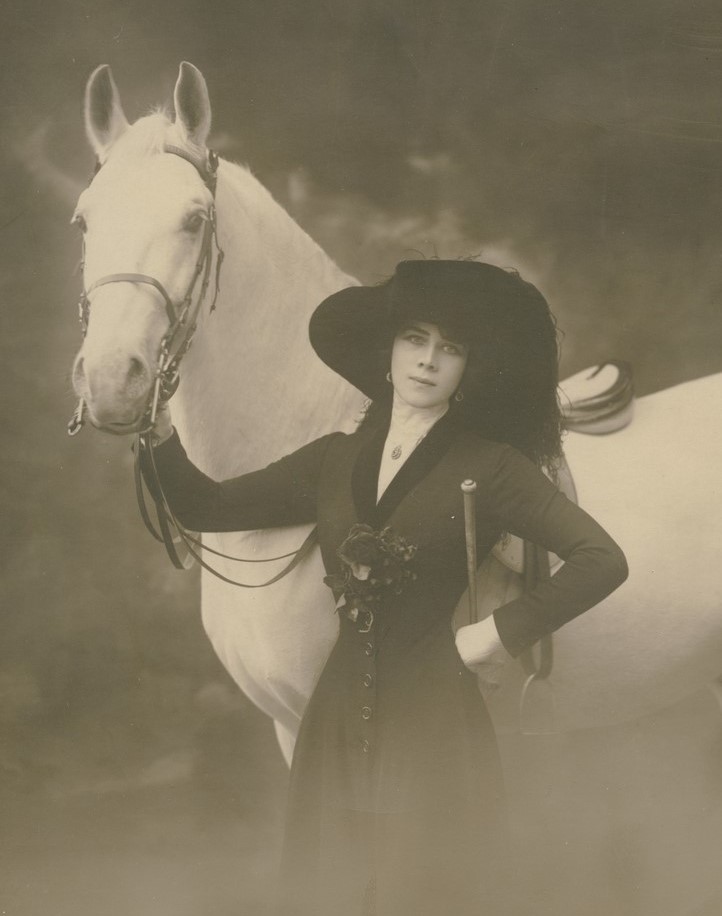