Basia Frydman was an actor, singer, and director. She made major contributions to the Swedish theatre world whilst also staying true to her Jewish background and her Yiddish mother tongue.

Basia Frydman was born in Świebodzice, Poland in 1946. She and her parents immigrated to Sweden when she was two years old. Her parents, Szymon Frydman and Chaja, were of Polish and Romanian backgrounds. The family, which grew to include her sister Regina and her brother Danny, settled in Uppsala. Her father was a hairdresser while her mother ran the family home which became a lively meeting-place for many Jewish refugees.

Basia Frydman used to entertain her friends and the Jewish congregation by singing Yiddish songs. She also performed at the Uppsala student theatre, Kammarteatern. She attended Calle Flygare’s Teaterskola (drama school) from 1966–1968 and the Swedish National Academy of Mime and Acting from 1969–1972. Both of these schools were located in Stockholm. Upon completing her studies Basia Frydman gained employment at various theatres: from 1972–1976 she was at Stockholms stadsteater (city theatre); from 1977–1978 she was with the successful independent Skånska teatern in Landskrona; during 1979 she was at Pistolteatern in Stockholm; and subsequently returned to Stadsteatern. The final part of her career was spent at Dramaten from 1982–2014. She was also involved in setting up the Jewish theatre on Djurgården, which delivered high-quality contributions to Stockholm’s theatre life during the 1995–2013 period.

Basia Frydman was primarily an actor but she also worked as a director, including at Dramaten. Further to these activities she was also a singer and recorded several albums. In terms of her acting she tended to be typecast as the foreign cleaning woman. Nevertheless, she made an impression no matter which part she played, from Fru Mopp in Georg Taboris’ Goldbergvariationer and as Baal’s mother in Bertolt Brecht’s Baal, to name just two of the plays. Lennart Hjulström took her away from the “foreigner type” when she was chosen to perform as the chorus in his production of Medea at Dramaten’s main stage in 1996. Despite her dark hair she was chosen to represent “the indigenous” whilst the blonde Stina Ekblad was chosen to portray the foreign Medea.

Basia Frydman enjoyed great success in the Kaos är granne med Finkelsteins production at Kulturhuset. She and Staffan Westerberg first met eachother in Werner Aspenström’s Väntarna in 1976 and then went on to appear in a lot of uproarious productions together. Amongst other things Basia Frydman played the part of Syster Yster opposite Westerberg’s Lillstrumpa in three children’s TV-series during the 1980s. She also appeared on the silver-screen, including in the part of a real “Yiddish mama” in The Slingshot in 1993, adapted from the novel by Bertil Schütt.

Basia Frydman died of cancer in Stockholm in 2016. She is buried at Södra Jurdiska kyrkogården (the Southern Jewish cemetery) adjoined to The Woodland Cemetery in Stockholm. 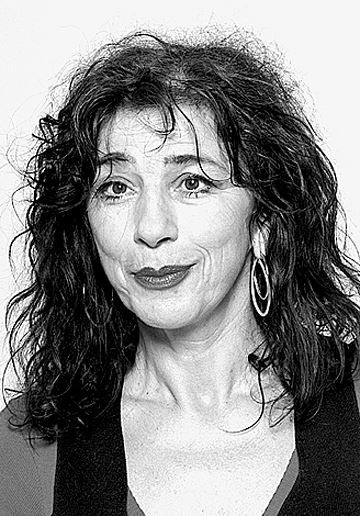