Pioneer of the abstinence movement, philanthropist

Beatrice Dickson was one of the founders of the first Blåbandsförening (temperance association) in Sweden and she was also widely engaged in other philanthropic activities.

Beatrice Dickson was the youngest child of James Dickson and Eleonore Willerding, who were cousins. Her siblings James Fredrik, Caroline and Axel Edvin were all active in different forms of philanthropic work. Beatrice Dickson remained unmarried and her philanthropic activities were funded by her inheritance.

Beatrice Dickson was mainly educated by a governess and by her parents, who were socially engaged and passed this engagement on to their children. There were also other influences. Beatrice Dickson prepared for her confirmation with the temperance-promoting priest Peter Wieselgren. When she was in her thirties Beatrice Dickson travelled abroad with her parents. In London she and her mother investigated the social work carried out by the city’s philanthropists, including the section of Young Women's Christian Association (YWCA) for shop assistants led by Hester Needham, and the social work of Catherine Booths and Agnes Hedenström in the poor quarters of the East End. The London philanthropists became Beatrice Dickson’s friends and sources of inspiration.

Similarly to many other philanthropists, Beatrice Dickson focused on education for the poor and abstinence among workers. At her parents’ property Överås, situated in Örgryte, Beatrice and her mother set up Överås Blåbandsföreningen, the first of its kind in Sweden, along with Föreningen Unga arbeterskors vänner (Friends of Young Female Workers’ Association). At the same time the publisher Oskar Gustaf Eklund started Blå bandet, a magazine promoting abstinence, and the Blåband-movement soon became a nationwide organization. In the associations she had set up Beatrice Dickson developed different methods of promoting abstinence – the vow of sobriety was a requisite for membership – and a comprehensive public education policy, respectively. The temperance movement was run partly in her home, and later in a property specifically donated to her for the purpose. Beatrice Dickson was also active nationwide with Blå Bandet, which was based in Stockholm. Much of her time was spent at conferences and lectures across the country. From 1906 to 1917 she served in her hometown of Gothenburg as the spokesperson for the so-called Gothenburg system, which was a non-profit supply company which aimed to reduce the consumption of aquavit. This method of selling alcohol became established in several Swedish and Finnish towns and cities from 1850 onwards and was the precursor of the modern Swedish alcohol monopoly.

Beatrice Dickson’s particular concern lay with young female workers. Under her leadership Föreningen Unga arbestskors vänner organised socials, evening motivational meetings and various types of entertainment. Clergy from the state church also participated by giving nonconformist sermons. Beatrice Dickson in particular developed initiatives targeted at young women. Further to her involvement in KFUK she founded a boarding home for young female workers, which developed into a domestic science school. She also set up cheap cafeterias and holiday homes for female workers, refuges for young girls, and nurseries and provisions for girls who were active in the scout movement. Beatrice Dickson thus supported a very large number of young women in a variety of ways.

Abstinence and the Christian faith were signature features of Beatrice Dickson’s philanthropic work. The exact amount of money she donated can, however, not be determined, as the donations were usually anonymous. She nevertheless became well-known, for example for the erection of waiting huts for Gothenburg’s coach drivers and chauffeurs. At the turn of the twentieth century Beatrice Dickson donated a so-called parish hut to the parish of Oscar Fredrik’s church, and this became one of Sweden’s oldest parish houses. She was also responsible for establishing the Örgryte parish house, where not only religious and social welfare services were offered, but also medical care, craft classes and public education were available. She also arranged large parties for emigrants, providing them with a generous send-off before their long journey westwards.

Beatrice Dickson’s social engagement stemmed from a deep Christian concern for those at the bottom of society. She died in 1941 and is buried in Gothenburg’s Östra cemetery. 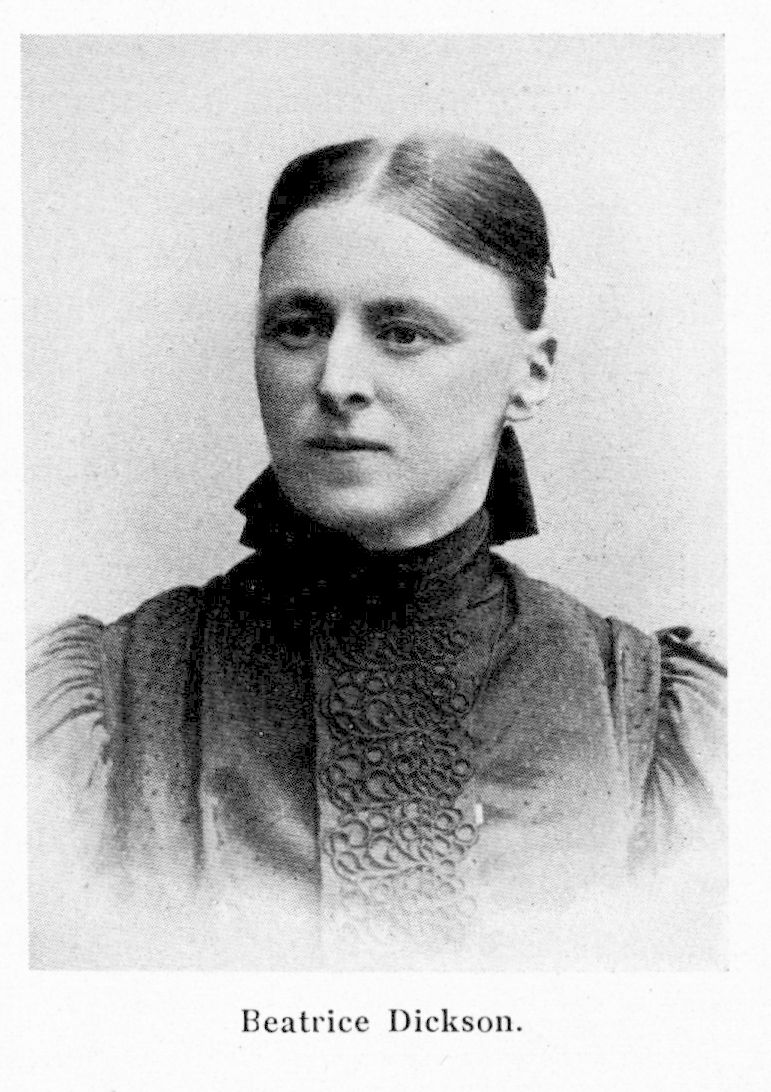