Betty Pettersson was the first woman to gain her school-leaving certificate in Sweden. She was also Sweden’s first female academic and first female school-teacher.

Betty Pettersson was born in Visby on 14 September 1838. She was the second child born to saddler Olof Pettersson and Carolina Kullberg. Betty Pettersson’s older brother was called Edvard, and two years later her parents had a second daughter, named Hedvig. The family lived at Adelsgatan inside the Visby city walls. Betty Pettersson’s father, who was said to seek improvement in his social standing, did his utmost to ensure that his daughter – who was considered to be a gifted child – was given every opportunity to undertake further studies despite the family’s comparative lack of financial resources. A private school run by the Misses Molander in Visby provided Betty Pettersson, along with the children of wealthier families, with basic schooling. This probably gave Betty Pettersson better chances of continuing her education than she would have had by attending the local public school. It was newly-established and experienced great difficulties in delivering the basic education it was supposed to provide.

At this time the usual route for becoming a school teacher entailed attending Högre lärarinneseminariet (the advanced teacher training programme) in Stockholm and then working at a girls’ school. However, Betty Pettersson opted for a different route. From 1860–1871 she worked as a governess in various homes in Småland and Östergötland, until the changes society was undergoing made it impossible for her to carry on. From 1870 it became possible for girls to sit the ‘mogenhetsexamen’ (the contemporary name for the school-leaving exam). Betty Pettersson sat the exam the very next year as a private student at Nya elementarskolan in Stockholm. Her aim was to be able to study the humanities and languages at university. However, achieving this goal was not easy. Although women had been able to study medicine, for example, at university since 1870 they were still not allowed to read subjects which were still coded as masculine theoretical subjects, such as history.

Nevertheless Betty Pettersson sought dispensation, arguing that if women could read medicine they should also be able to read history. Her challenge was accepted and she enrolled at Uppsala university as part of the Gotland body of students in February 1872. She then read history, modern literature, and new European linguistics. She gained her Bachelor’s degree in new European linguistics and modern literature in January 1875. Ten years later August Strindberg would mock this ground-breaking achievement in his short story called Giftas II. “The first woman to gain her school-leaving certificate in Sweden cheated, as no boy before her had ever done. She had Rabe’s grammar secreted into her Latin dictionary. I remember that she was failed that time, but she passed the next. And following her death she was celebrated as a path-breaker of women and – men”.

Having completed her studies at Uppsala Betty Pettersson became the first female teacher who, in 1875, was employed at a school for boys. She was initially given a probationary post at Ladugårdslands lägre elementarläroverk (later known as Östra Real) and subsequently became a fully employed elementary school teacher. Her students and her colleagues equally described her as a well-liked and skilled instructor.

Betty Pettersson’s ground-breaking journey was written up in the newspapers after she died. In addition to her role as the first woman to gain her school-leaving certificate it was also noted that she was the first woman to qualify as and then hold a fulltime post as a teacher at a general school. However, it seems that a mere 40 years after her death her pioneering life story was already forgotten. An article in Tidevarvet from 1925, written by Andrea Andreen, notes that not many of Betty Petterson’s letters or other documents had survived and that this, in combination with the subsequent emergence of more famous female students such as Ellen Fries, had perhaps resulted in her becoming forgotten. For the same reason a collection was set up in 1925 by the journal Idun on behalf of “all those who would like to have a tombstone erected for Betty Pettersson as a visible token of commemoration of her deeds.”

Betty Pettersson was true to her vocation as a teacher until she died of tuberculosis in Stockholm in 1885. Her grave lies at the Norra cemetery in Solna. In recent times Betty Pettersson’s innovative contributions have increasingly received attention. Memorial plaques in her honour have been mounted in several places, including at Östra Real and at her birthplace in Visby. One of the large auditoria in Blåsenhus – which serves as the premises of Instititutionen för pedagogik, didaktik och utbildningsstudier (the department of pedagogics, didactics and educational studies) at Uppsala university – has been named after Betty Pettersson. 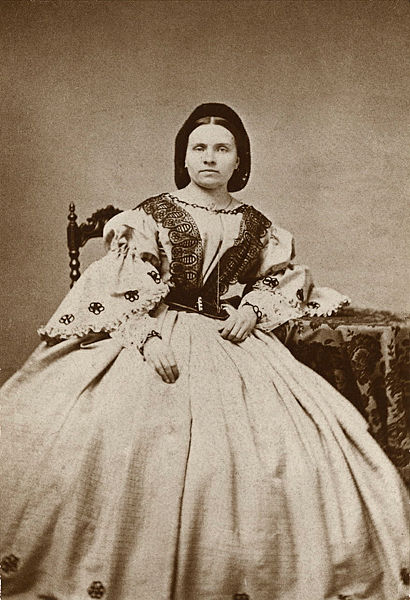