Philanthropist, donor, patron of the arts

Caroline Wijk was an important donor and patron within the social, cultural, and scientific circles of Gothenburg.

Caroline Wijk was born in London in 1846. She was the daughter of James Dickson, a businessman, politician, and patron, and his wife Eleonore. The family lived at the Överås estate in Örgryte parish, an estate which James Dickson had had built in the early 1860s. At that time it was not yet incorporated into Gothenburg. After receiving private tuition at home Caroline Wijk married Olof Wijk the younger in 1870. He was a business man, a local-politician and a parliamentarian, speaker for the Second Chamber in parliament, a patron, and a donor. The couple had three children together: Olof, Hjalmar, and Eleonora.

It appears that Caroline Wijk was influenced by her father’s social and cultural activities, particularly his involvement as a patron of artists and scientists. Her sister Beatrice Dickson, was similarly inspired by her father and, along with her mother, dedicated herself to the temperance cause. James Dickson was very wealthy and left a sum of over 7 million kroner behind on his death. Thus Caroline Wijk – whose husband was also very well-off – had access to a vast fortune. Caroline Wijk divided her time between her home at Lilla Torget 1 in Gothenburg and Stockholm, where Olof Wijk often found himself. Their marital home and its sizable art collection was known for its hospitality where politicians, artists, scientists, and cultural celebrities would gather.

Just like Caroline Wijk’s father she and her husband were patrons of those with little means in a variety of spheres, including young artists. The couple donated 330,000 kroner to Kristliga föreningen av unga män (KFUM; Young Men’s Christian Association) and Kristliga föreningen av unga kvinnor (KFUK; Young Women’s Christian Association) and their enterprise founded in Gothenburg in 1888. Between the years of 1896–1898 a building was erected in the city for these associations’ use at Parkgatan. In 1896 the couple donated 100,000 kroner in memory of their late son, Olof, to Göteborgs högskola (college). Caroline Wijk donated a further 150,000 kroner to the school in 1901 as her recently deceased husband had intended to make this donation in memory of their son. Following her husband’s death Caroline Wijk’s financial donations increased markedly. She and her surviving son Hjalmar, who still lived at home, became involved in supporting a variety of projects.

In 1911 Caroline Wijk deposited a deed of gift to Gothenburg city relating to a building at Jungmansgatan 37 along with a financial donation of 15,000 kroner intended for its maintenance. The building was intended to serve as a home for widowers who had young children. According to Caroline Wijk these men needed support to keep their families together. The building comprised 23 apartments and a nursery. The families who lived there were also to have help with cleaning and food preparation. In many ways this was an early form of communal living.

In 1915 Caroline Wijk set up a leasehold at what is now Vasa Kyrkogata in Gothenburg to provide a home for nurses. She wanted to offer Gothenburg nurses – who often worked and lived in private homes – “a proper home where they could access much-needed calm and comfort during their demanding and draining professional lives”. This nurses’ home was later rented out to the Fredrika-Bremer-Förbundet (association) nurses’ agency in Gothenburg. The building was erected in the period of 1916–1919, in accordance with plans by the architect Ernst Torulf. At its height there were 30 nurses living in the building. Initially rent was set at 175 kroner a month, which included food, laundry, and cleaning. A beautiful common room was provided for leisure and communal activities. Four rooms were reserved for aged nurses. Any excess funds were to be sent to the Caritas sisters who cared for the needy. In 1919 the Caroline Wijks Sjuksköterskehem trust was established.

In 1916 Caroline Wijk made several large donations: 700,000 kroner was given towards the erection of a new concert venue in Gothenburg, again in the memory of her late son Olof. The Wijk couple had previously been involved in a temporary wooden concert venue at Heden in Gothenburg, but this had burnt down in 1928. The new concert venue was to be erected at Götaplatsen and was to comprise two concert halls, one large, one small, and was also to be used, amongst other things, for conferences, meetings, and charity events, as long as they “aligned with the decorum of the concert venue”. The architect Nils Erik Eriksson drew up the plans for the concert venue which was inaugurated in 1935.

In 1916 Caroline Wijk also donated the sculpture called Vingarna, created by Carl Milles, to Gothenburg city. Initially it was placed at Bastionplatsen but in the 1940s it was moved to Götaplatsen.

In 1916 one million kroner was willed to Gothenburg city to create the “Olof and Caroline Wijk fond” which was to be run by the city. Accrued income was to benefit Gothenburg society for use in general cultural or charitable aims, such as providing proper and sanitary accommodation at affordable rent for needy people, for countryside breaks offering rest and enjoyment, and for the support of already existing facilities serving the fund’s main aim. Caroline Wijk supplemented the fund through an additional donation of 700,000 kroner, of which the income – apart from generating an annuity for her niece – could be added to the former donation.

Upon her death Caroline Wijk received tributes from Axel Carlander, the chair of Gothenburg city council. He revealed her humble response when she was asked to support some social enterprise: “I am so thankful that I can be involved in and offer help in this matter”.

Caroline Wijk died in 1918. She is buried at Östra kyrkogården (the Eastern Cemetery) in Gothenburg. 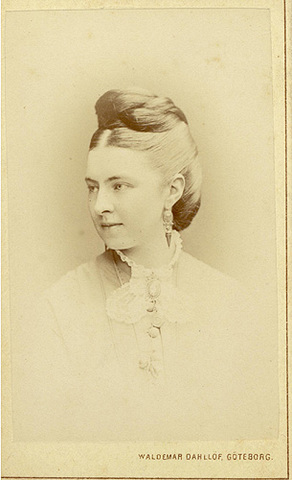