Suffragette, took active part in the temperance and peace movements

Cecilia Francke made major contributions to the temperance and peace movements during the early decades of the 1900s.

Cecilia Francke was born in Osby parish on 18 January 1860. Her parents were farmers in Slähult, where she grew up. She read her church confirmation reading so well that it led the parish vicar to suggest that she become a substitute teacher at the local public school even though she lacked the proper qualifications and was only 16 years old. Cecilia Francke took him up on his suggestion and was promised, as she set out on her new career path, that the congregation would support her in her training to become a fully-qualified teacher. By the summer of 1876 she was already enrolled in a practical teaching course at the Småskollärarinneseminarie (junior school female teacher-training programme) at Kristianstad. For the next few years she worked as a småskola teacher in the areas near Osby and Sibbarp.

In 1884 Cecilia Francke moved to Stockholm in order to study at the Folkskoleseminarie (public school training programme) there. After she gained her qualifications she first worked as a substitute folkskole teacher for a few years and then as an ordinary folkskole teacher until 1921. In tandem with her school-teaching Cecilia Francke also taught in other capacities, such as at Louise Nordlindh’s hemskola (home school) and in teacher-training at the Löfven and Detthow småskollärarinneseminarium. She was also the director of the småskollärarinneseminarium at the Ateneum girls’ school for a time, and she ran her own preparatory courses for students who wanted to apply to a folk- or småskoleseminarium.

Throughout her engagement in Vita Bandet Cecila Francke authored a great number of newspaper and journal articles. Her interests were expressed through three general themes: temperance, women’s suffrage, and peace activism. Some examples of her output include ‘Nykterhetsfrågan och riksdagen’ in the journal Hvita Bandet, from 1907, ‘Kvinnorna och de kommunala valen’, Vita Bandet, from 1910, and ‘Krigets vanvett och dess bekämpande’ in Jultoner, from 1924.

Cecilia Francke was also frequently asked to give talks by societies, associations, and congregations throughout Sweden. Between 1904 and 1936 she gave about 2,000 talks. Often she would repeat the themes used in her writings, but she also spoke about how to raise the young, education, and about the position of women in society in general, as well as on the previously mentioned themes. She would often discuss a given person and the struggles that he or she had gone through and which important goals they had achieved. The talk would end with a reflection on how her contemporaries might consider taking on obligations in relation to the thoughts she had expressed. A selection of her numerous talks serves to illustrate this: ‘Carmen Sylva’ (a Romanian queen and author); ‘Ungdom och idealism’ (youth and idealism); ‘Kvinnomakt och kvinnoansvar’ (women’s power and women’s responsibility), ‘Nykterhetsarbetets etiska innebörd’ (ethical implications of temperance work); ‘Frances Willard’ (an American teacher and social reformer); ‘I krigets spår’ (the imprint of war); and ‘Nutidskampen för ett rättmätigt samhälle’ (contemporary struggles for a just society).

Cecilia Francke expressed her strongly held conviction that peace was an achievable goal. Towards the end of her life, as the Second World War broke out, she kept hold of that belief and believed that the fight had to continue even though it seemed very difficult to bring it to fruition.

Cecilia Francke died on 12 December 1945. She is buried at Osby cemetery. 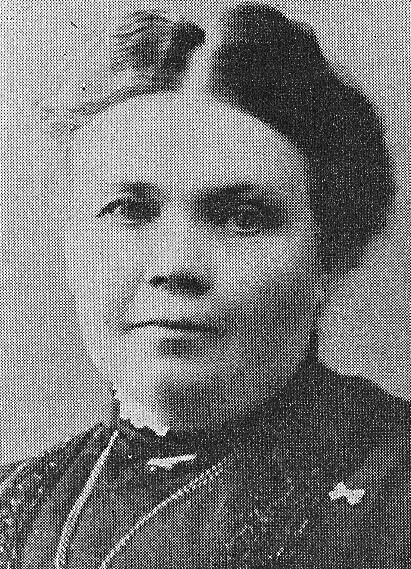