Ebba von Eckermann was born in 1921 as the eldest of three daughters. Her mother was the well-known Marg von Schwerin, née Engström, who founded the needlework school and couture atelier Märthaskolan. Her father Fritz von Schwerin, who was a lawyer, belonged to an aristocratic family with roots in Estonia. Ebba von Eckermann had at first no plans of following in her mother’s footsteps. She chose instead to educate herself as an agriculturalist, and straight after elementary school she worked as an agricultural trainee on the Baltic island of Öland. After that, she attended an agricultural college and an agricultural housekeeping college. At the latter, she learned to weave, which was to turn out to be very important for her future career. She spent some years in the 1940s looking after the family farm in Norrgärde. When the farm was wound up, she moved to Skarhult Castle that was owned by her von Schwerin relatives. There she attended the Märthaskolan housekeeping school, which was simultaneously being moved to Skarhult from Granby. After her agricultural courses, Ebba von Eckermann also completed a short course in needlework at Märthaskolan. She also worked for a while as a travelling saleswoman for Märtha ready-made clothing products. This branch had been started by Marg von Schwerin after having an insight that the future lay in being able to offer cheaper clothing and thereby reach out to a larger target group.

Ebba von Eckermann met Sergeant Erik von Eckermann through common friends in 1941. He was the great-grandchild of the Countess Wilhelmina von Hallwyl. The couple were engaged in 1943, and the year after, they were married at Skarhult. Erik von Eckermann continued his education during the coming years with the intention of taking over the family farm Edeby gård. During this time, Ebba von Eckermann moved between three different homes in Björnlunda, Sunnersta and Köping. At the end of 1945, the couple had their daughter Margaretha. The family moved in 1947 to Sandvik, a farm belonging to Edeby gård in the village of Ripsa. The year after, their son Hans was born.

After the von Eckermann family had moved out into the country, Ebba von Eckermann needed to find an occupation that could provide the family with an income. She therefore started her company Ebba von Eckermann Textilier in 1949, often called Ripsa textiles, since it was situated there. Internationally, the company went under the name Countess von Eckermann. Many women in Ripsa needed work and several villagers could therefore be employed by the company. Production consisted mostly of home needlework and the company also ran a weaving school.

Ebba von Eckermann Textilier produced woven fabrics for Märthaskolan and also for other retailers. These deliveries did not however result in any larger income and her eyes turned to the USA where Ripsa plaids were launched. Ebba von Eckermann contacted major American department stores in the hopes of awakening their interest. She also used her family’s and acquaintances’ contacts in the USA to sell her products. During her first journey to the USA, she only sold 36 plaids as samples to three different companies. This changed with passing years, however, and the USA became a large and significant market for Ebba von Eckermann Textilier.

Ripsa plaids were popular during all the years the company was active. During 1952, two other products were developed that also came to enjoy great popularity: the Ripsa jacket and the Ripsa skirt. The Ripsa jacket was sold at the Swedish EPA department store and also at Nordiska Kompaniet (NK) in Stockholm. Ripsa skirts meant a break-through for Ebba von Eckermann Textilier. They were designed according to the fashion of the 1950s with elastic waists and were wide at the hem. The skirts were often sewn with only one seam. The first Ripsa skirts were an order from the Marshall Field’s department store in Chicago. They were also sold by the Dior fashion house in Paris, and could be bought at the Dior Boutique until 1955. The link to Dior made the skirts extra popular. Another marketing strategy that worked was that two looms were transported from department store to department store where Ebba von Eckermann wove while customers could see how the fabric came into being. This led to many radio and TV appearances. The company in Ripsa came to be a tourist attraction. Ebba von Eckermann received a request in 1958 from a Nordic travel agent who wanted to stop in Ripsa during their bus tours with foreign tourists. This resulted in tourists visiting the village for many years, which led to other businesses in the district also blossoming.

Between 1957 and 1965, the company received a great deal of attention in the media, domestically and also internationally. Around 5,000 garments were produced annually and sold in Sweden, Canada, England, Germany and the USA. At the beginning of the 1960s, when the company was at the pinnacle of its success, it stood for ten per cent of Swedish textile export. In the mid-1960s, things changed, and the company began to have difficulties on account of increased competition and pressed prices. The company made great losses but survived on the market until 1981 when it started closing down. In its last years, the shop in Ripsa kept going through the sale of clothes and fabrics to tourists.

Ebba von Eckermann’s grandchild Carl von Eckermann started up production anew around 2010. A collection of plaids, baby blankets and cushions was developed, and the Ripsa jacket was also produced once again. The new products are woven manually by women weavers living in the province of Sörmland, just as they were in the days of Ebba von Eckermann.

Ebba von Eckermann died in 2018, at 96 years of age. She lies buried in Ripsa Cemetery. 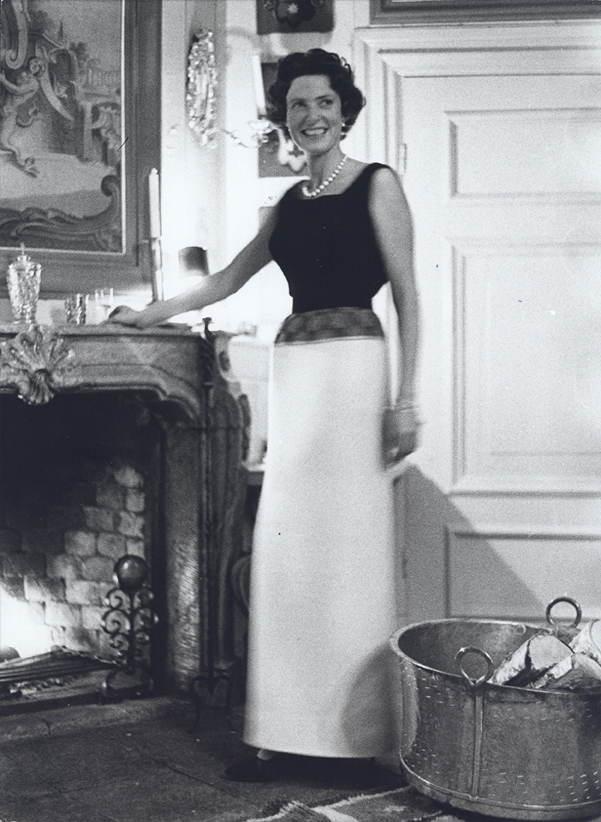