Elin Brandell was a female journalist of the early 1900s, a so-called Pennskaft, female writers known for their sardonic causerie-style articles.

Elin Branell was brought up in an academic household. Her father, Pontus Henriques, was a professor at Kungliga Tekniska Högskolan (Royal Institute of Technology) in Stockholm. Elin Brandell attended the Wallin school in Stockholm and graduated in 1902. She subsequently studied at Uppsala University where she gained her Bachelor of Science degree in 1906. In 1908 she married the journalist Simon Brandell (1860-1925), whom she had met while working at Dagens Nyheter. Together they had a son, Ulf (1910-2003), and a daughter, Barbro (1920-1975), both of whom also became journalists.

Elin Brandell became employed as a journalist at Dagens Nyheter in 1906 and remained there until she retired in 1937. She covered all genres of articles in the daily press. Like many of the women who came to be called Pennskaft she began with translations, writing so-called minor articles, writing (fake) polemical letters to the editor under a range of pseudonyms, and interviewing celebrities, whilst also fulfilling all the tasks she was given by the editor. In all three of the newspaper’s commemorative volumes entitled Ur Dagens Nyheters historia del I-III she is described as a successful woman, “a first-class reporter and a witty columnist with her own style and opinion who aroused admiration even in that toughest sphere of criticism, among her work colleagues”.

Other young women were employed by the various Stockholm newspapers around the same time as Elin Brandell and they soon formed a small group which came to be known as “Ligan” (the gang). In addition to Elin the group included Ellen Rydelius from Dagens Nyheter, Célie Brunius from Svenska Dagbladet, and Elin Wägner, who not only wrote for Dagens Nyheter but was also assistant editor-in-chief for the weekly journal Idun. After Elin Wägner’s death Elin Brandell composed a personal memorial notice in Dagens Nyheter which testifies to the strong ties between the female journalists of the time. In 1911 the group made history when they arranged a soirée in order to collect money to establish a travel grant for female journalists. They made a silent film called “She got the post” using several members of “Ligan” as actresses. The grant began to be publicly awarded from 1913 onwards.

Elin Brandell is best-known for her incisive words, particularly in the causerie-style articles she wrote as the “Non-political Wife” from the late 1920s onwards. These took the form of a well-received serial in which she reflected on elected politicians’ behaviour from the perspective of parliament’s press benches. Prior to this, in 1910, she had already written a short serial in causerie-style as “Regan” about a group of women who comprised the fictive “Histam Saturday Club”. She relayed the ladies’ conversations about current events, such as the women's suffrage campaign and Elin Wägner’s latest novel Pennskaft. In 1916 she published a collection of these causerie-style articles in a book entitled En enkel kvinnas funderingar.

In the summer of 1939 Elin Brandell published a series of stories called “Letters to my doctor” under the pseudonym Inga Keine in Göteborgs Handels- och Sjöfarts-Tidning. The series can be read as a ten-chapter drauft of a novel typically found on bookshop shelves in 1930s, namely, women’s accounts of their lives. In the 1940s she published material of a more serious journalistic nature, for example, Kerstin den första, 1940, about Kerstin Hesselgren, whilst also translating books such as England i närbild: hur kvinnorna ser på kriget, 1942.

Elin Brandell passed away in 1963. 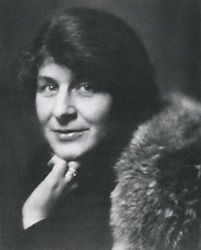