Elisabeth Krey-Lange was a journalist and an active member of the women’s movement.

Elisabeth Krey-Lange continued her education overseas. In 1901 she attended the Sorbonne in Paris and then the University of Oxford in 1902. Once she had returned to Sweden she continued her language studies at Uppsala University, gaining her bachelor’s degree in 1904. A career as a teacher seemed likely for her and, following a probationary year in Lund, she spent the period of 1906—1908 employed as a teacher in Ronneby and in Norrköping. Once her father had stopped working her parents moved to Stocksund, near Stockholm, and so Elisabeth Krey-Lange looked for a job there.

She had already published a causerie-style article in the local history journal, Fyrstickan, in the summer of 1894, for which she used the byline No Name. In 1909 she suspended her teaching career to begin writing for the newspaper Stockholms Dagblad, using a variety of names but primarily the bylines Chouette and Birba. She became a colleague of Ellen Rydelius, Elin Wägner, Elin Brandelius, Else Kleen, and the other female journalists who belonged to the informal network known as “Ligan”. The friendship this group provided was of both personal and professional significance. In addition to short press items — primarily, translations of foreign press items on spectacular events throughout the world — as well as reports on events in the Swedish capital, Elisabeth Krey-Lange also wrote about social issues. These included the conditions endured by women and children during the general strike that year, employment conditions for female workers, charitable efforts ahead of Christmas, a long series of short stories about “Stockholmskan” (the Stockholm woman), and not least all the suffrage meetings being held at that time. She herself was a member of the suffrage organisation Landsföreningen för kvinnors politiska rösträtt (LKPR) and during her time at Stockholms Dagblad she also contributed to the journal of the Fredrika Bremer Association, Dagny.

Her linguistic skills and knowledge of foreign literature also led her to write many book reviews and hold interviews with authors. In the spring of 1911 she changed employer and began to work for the daily newspaper Svenska Dagbladet, still producing the same type of output as at her previous job. The following year the LKPR began to publish its own organ entitled Rösträtt för kvinnor (Suffrage for Women). Two issues were released each month and Elisabeth Krey-Lange served as the organ’s first editor. However, holding down these two jobs simultaneously became altogether too time-consuming and she resigned from her post as editor after one year. She nevertheless continued to work with the title, primarily contributing pieces on foreign literature. She also became active in male-dominated professional associations and by 1910 had already joined Publicistklubben, the Swedish Publicist’s Association. In 1912 Elisabeth Krey-Lange was the sole female member of Svenska Journalistföreningen (now Journalistförbundet, the Swedish Union of Journalists), in which she later served as a member of the committee which disbursed the female journalists’ stipend fund from 1922—1923.

Elisabeth Krey-Lange’s desire to travel and to further her journalism skills led her to spend six months in the USA before the First World War broke out in 1914. She was officially in the USA in order to study but she frequently wrote for Svenska Dagbladet in order to fund her travels. During the spring of 1914 it became known in the Swedish press that Elisabeth Krey-Lange had written on the Swedish women’s movement for American magazines in Washington and in Chicago. She had presumably made contacts with foreign members of the press at the International Congress of Women held in Stockholm in 1911, which she had attended on behalf of Svenska Dagbladet. In America she travelled around the East Coast and through the Swedish settlements in Chicago. During the summer of that same year her colleague at Svenska Dagbladet, Ester Blenda Nordström, had become a well-known name through the reports she had written from rural Sweden while disguised as a maid. In the early autumn Svenska Dagbladet published, with a proud introduction, that Elisabeth Krey-Lange had also used similar tactics on under-cover visits to various placements, as well as masquerading as a servant girl in New York. She also provided several reports on the place of Swedish-Americans in contemporary culture, amongst other things.

On Elisabeth Krey-Lange’s return to Stockholm and Svenska Dagbladet she continued her general reporting duties but increased her output on the arts and reviews of the then new medium of moving pictures. In 1916 she was adequately experienced to be promoted as editorial staff for the journal Idun, as Elin Wägner’s successor. She had in the meantime, in 1917, gotten married to the Einar Lange, who held a licentiate in medical science and served as a provincial doctor. Sadly their marriage was only short-lived as her husband died as a result of the 1918 flu pandemic just the following year.

Following the end of the First World War the organisation Save the Children was set up in response to the needs of distressed children in war-torn countries. Elisabeth Krey-Lange was one of the Swedish representatives who attended the international meeting held in Geneva at New Year in 1920, along with Gerda Marcus and Elin Wägner. After that meeting they travelled on to Vienna in order to supervise the arrival of food aid and clothing from Sweden. Elisabeth Krey-Lange continued on foot, working as a freelance journalist for many years, travelling, amongst other places, to Rome where her colleague Ellen Rydelius had been resident for extended periods. Together with yet another colleague, Agnes Lindhagen, the three of them apparently undertook the first “Rome in 8 days” tourist-tour. They encouraged Ellen Rydelius to use that as the title for her first book in her extensive series of 8-day travel-guides for various capital cities. Although Elisabeth Krey-Lange was Svenska Dagbladet’s Rome correspondent during the 1925—1927 period she also wrote for Tidevarvet, Husmodern, and Bonniers Veckotidning — later Bonniers Månadstidning. She also translated around twenty novels and biographies from English, German, and French.

Elisabeth Krey-Lange frequently worked as a freelancer for Svenska Dagbladet during the 1930s, supplying the newspaper not just with articles and reports but also many translations for the daily serial section. She also published a novel of her own in 1933. Meanwhile, her involvement in the women’s movement intensified. For much of the 1930s, she served as the international press agent for the International Council of Women, which today still enjoys an advisory position within the United Nations. In 1934 Elisabeth Krey-Lange became the publisher and editor of the newly-established nursing publication Tidskrift för Sveriges sjuksköterskor, continuing in this role until 1950.

Elisabeth Krey-Lange married engineer Hjalmar Halldin in 1935. She had been introduced to Halldin by her colleague Ellen Rydelius whilst in Rome. She was widowed a second time when Halldin died in 1957. Elisabeth Krey-Lange herself passed away following a lengthy period of illness in 1965. 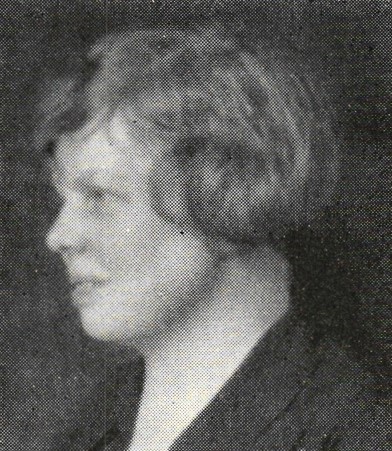