Ellen Erup was a chief midwife at Södra maternity unit and head of the midwives’ training establishment in Stockholm. She was also the chair of Svenska Barnmorskeförbundet (“the Swedish Association of Midwives”) from 1944 to 1968.

Ellen Erup was born in 1893 in Raus near Helsingborg. She was the third child in a family of four. Her family did not belong to the upper social circles. Her father was in charge of a cattle yard and warden of the poorhouse. There must have some financial comfort as when Ellen Erup’s mother was widowed she was able to fund her daughters’ education. Ellen Erup completed eight years of basic schooling and then trained to become a nurse at the nursing school of southern Sweden in Lund. After her graduation in February 1916 she briefly worked at a sanatorium and then began midwifery studies at Södra maternity unit in Stockholm. It was unusual to have a dual specialism in those days, and there were clear boundaries, particularly social ones, between the two occupations. In June 1917 Ellen Erup graduated from the midwives’ training establishment in Stockholm with commendations. After spending a few years working in Lund and Jönköping she moved back to Stockholm in 1925 and became employed at Södra maternity unit. Barely two years later she had become chief midwife and head of the midwifery training establishment. She remained in post until she was pensioned in 1948.

In 1934 Ellen Erup was one of the Swedish representatives sent to the international midwives’ association conference in England. She was impressed by the developments in pre-natal care for expectant mothers that she saw there. Two years later she participated in a conference in Berlin, literally held in the shadow of the Nazi swastika emblem. In 1937 Ellen Erup and chief physician Birger Lundqvist were elected onto the board of Svenska Barnmorskeförbundet. He was the chair and she was the secretary. Ellen Erup succeeded Lundqvist as chair in 1944 and retained this post until 1968. She was the first woman in the midwives’ association leadership to have enough influence to be able to decide on its direction. Given Birger Lindqvist’s comparatively progressive approach he remained a valuable ally. Although he was not a long-term member of Barnmorskeförbundet’s board, he remained active at Södra maternity unit for almost 20 years. This meant that Ellen Erup and Birger Lundqvist held leading posts in both the midwives’ association and in the midwives’ training establishment for a considerable period of time. This aided continuity and gave them an opportunity to shape the midwives’ training. They were both personally committed to training the most skilled midwives possible and they both saw opportunities for midwife profession and its area of responsibility in the extended public care which came into planning during the 1930s.

As a result of Gunnar and Alva Myrdal’s book Kris i befolkningsfrågan, 1934, family planning began to be discussed openly. Although the midwives were not particularly keen on the subject of contraception Ellen Erup understood that contraceptives could become an important element in the field. Unlike many others she could see that extended maternity care was a good alternative to the decline in home-birth care and that it could safeguard the midwives’ roles in preventative healthcare. She became acquainted with Elise Ottesen-Jensen as well as the radical doctor Axel Höjer, who became the director-general of Medicinalstyrelsen in 1935.

In 1941 Ellen Erup sought the help of Kerstin Hesselgren and Olivia Nordgren, both members of parliament, in raising awareness of midwives’ salaries and working conditions. The interwar period had led to a decline in the national birth rate which had led to a reduction in the number of training vacancies. As the birth rate began to rise there was a shortage of midwives and under-resourced midwives struggled to cover both home-deliveries and increased demands for their services at maternity units. The plans for a new healthcare system, in which preventative care played an important role, included an overhaul of midwifery. A separate investigation into midwifery was commissioned and Ellen Erup was called upon for her expertise. This became her first major contribution to the general public. She emphasized the great demand for midwives with additional qualifications. The outcome of the investigation was positive and led to improvements in both salaries and pension conditions for midwives. Further, it was decided that maternity units would be allowed to treat illnesses related to pregnancy, significantly broadening the scope of midwives’ responsibilities.

It did not take long for Ellen Erup to understand the importance of PR. The outdated view of midwifery needed to be modernised and somewhat reinvented. Emphasis was placed on the skilled and modern nature of the profession. In 1940 Svenska barnmorskor was published, comprising several hundred pages on the history of midwifery and a list of its professional members. Ellen Erup was responsible for the chapter on the training establishment. In 1950 she became the editor of the midwives’ journal, Jordemodern. In the ensuing years Svenska Barnmorskeförbundet decided to join TCO (a national trade union centre). In 1954 dual finally became a permanent requirement and Ellen Erup could confirm that the goals she and the midwives’ association had aspired to for so long had finally been achieved. The reforms also led to repeated suggestions that midwives be merged with Svensk Sjuksköterskeförening (“the Swedish Association of Nurses”), a move which Svensk Barnmorskeförbundet viewed as highly undesirable. The fact that midwives were authorised, just like doctors, set them apart from nurses. Ellen Erup often highlighted this difference. Following just five years of membership in TCO Svenska Barnmorskeförbundet withdrew from it, seeking to retain its identity as an independent organisation.

Ellen Erup was also active in the Bondeförbundets kvinnoförbund (“the Farmers’ Union Women’s Association”). She agitated on behalf of issues such as working women’s salary improvements and flexible working hours. The extremely worrying shortages of staff at institutions and in provincial healthcare was, in Ellen Erup’s opinion, “not just a women’s issue but a societal issue”.

During the 1950s Svenska Barnmorskeförbundet undertook international activities. In 1952 Ellen Erup went on a study-trip to the USA, whilst in 1954 the London meeting of the International Council of Midwives took her to England and Scotland. On her return to Sweden she discussed British maternity care on Swedish radio. At the former meeting of the midwives’ council it had been decided to hold their next gathering in Stockholm. The 1957 gathering, for which the theme was “midwives and maternity care” – highly relevant to Swedish midwives – was the largest meeting that had been held since the International Council of Midwives was established in 1900. It proved to be the pinnacle of Ellen Erup’s career. Almost 900 participants attended from across the globe. Ellen Erup was referred to as “the chief midwife in Sweden” who was now becoming “a global chief”. She was elected president of the international association, and during the actual conference she was awarded the Illis quorum medal.

During the 1950s and 1960s elements of the new childbirth and maternity care began to fall in place. New training courses and specified tasks within maternity care had expanded the skills required in midwifery which, in turn, raised the status of the profession. Ellen Erup was not the only significant instigator behind these developments but her long-term contributions to the profession did play a deciding role in them.

Ellen Erup was completely devoted to her work. She lived at the maternity unit during her working years. Marriage was not a realistic option in her position. Despite her extremely active life she appears to have been quite a lonely person. Her strict manner and the great demands she placed on her surroundings did not always find favour, although she was greatly admired and respected. She appeared to have an almost superhuman capacity for work. Even after having left her unionized job she continued to lecture on the history of midwifery at the training establishment. Her last lecture was held just two months before she died.

Ellen Erup survived to see the Svenska Barnmorskeförbundet centenary in 1986 and she participated in it herself. She died in Stockholm in 1988. Her grave can be seen in the Norra cemetery in Lund. 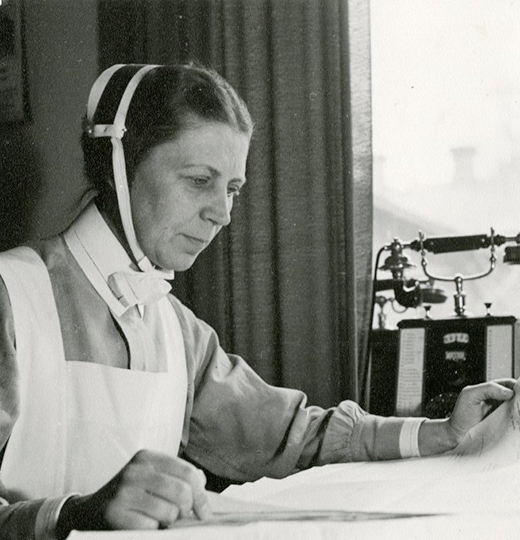