Ellen Moberg was a pioneer of the Swedish pre-school movement. She was a driving force behind the development of pre-schools both locally in Norrköping and nationally through Svenska Fröbelförbundet (the Swedish Fröbel association).

Ellen Moberg was born in Norrköping in 1874 and grew up in a well-to-do environment. Her father, Wilhelm Moberg, was a doctor. Her mother, Sara Moberg, was the sister of Gustaf and Edward Ringborg, business leaders who made their livelihoods trading with the expanding Swedish industries. Ellen Moberg’s sister, Maria Moberg, was also a pioneer of pre-schools and their brother, Axel Moberg, was a professor of Eastern languages. Ellen Moberg never married.

Little is known of Ellen Moberg’s own education. She herself claimed that all her education came from her sister. Her further education was, however, comprehensive, and she regularly visited childcare institutions and attended training seminars and conferences throughout the North and in Belgium, England, Switzerland and Germany.

Ellen Moberg’s contributions to the pre-school movement began in 1899 when she, along with her sister, established a private kindergarten in Norrköping, which catered for ten children. As the term kindergarten might imply, Ellen and Maria Moberg were strongly influenced by the German educationalist and philosopher Friedrich Fröbel. In contrast with the småbarnsskola (the early pre-schools) of the era, which promoted school-like activities, kindergartens were homely institutions, which placed great importance on nurturing the children, and activities such as games, rhythms and a range of pastimes. A normal day at the Moberg sisters’ kindergarten in 1909 could, for example, include singing, braiding, arranging shapes, sleeping, paper cutting and folding, reading stories and freestyle drawing.

The sisters found that working with children in private kindergartens was so rewarding that they began to consider expanding their business to also cater for poor children. As a result they opened what has been described as the first communal kindergarten in Sweden in 1904. It was located on the premises of the Moberg-Egger girls’ school. In 1909 the sisters set up the Fröbel association in Norrköping as a further support to their activities. The two main aims of the association were to run kindergartens and to train kindergarten leaders at the Fröbel institution, which was set up that same year.

Ellen and Maria Moberg’s respective contributions to the pre-school movement are difficult to disentangle, particularly as they worked together very closely. The historiography has emphasised how they complemented each other in their different approaches. Ellen Moberg is considered to have been the more critical of the two. Her biographers place particular significance on her organisational abilities. She also took on several important roles. When the Swedish Fröbel association was established she was elected as its deputy chair, and the following year she took over as chair, a post she retained for 25 years. From 1909 to 1939 she also served as the head of the Fröbel association in Norrköping. She organised a multitude of meetings and lectures and was largely responsible for the financial side of the activities.

Further, Ellen Moberg was also a member of Norrköping town council from 1919 to 1926. When she resigned it was in protest at the cutbacks to the municipal funding for the Fröbel association. In 1936 she undertook an investigation of Swedish pre-schools at the behest of the ministry of social affairs. As a reward for her comprehensive work she and her sister were awarded the Illis quorum meruere labores medal of the fifth degree. She was also awarded the Norrköping town medal of honour, the St. Olof medal.

Ellen Moberg was well travelled and, along with her sister, was part of an extensive social network. They collaborated with other eminent activists in the growing pre-school sector, including Disa Beijer and Anna Warburg, as well as other socially-oriented women of the bourgeoisie, such as Elsa Beskow and Alice Tegnér.

Ellen Moberg died in Norrköping in 1955. 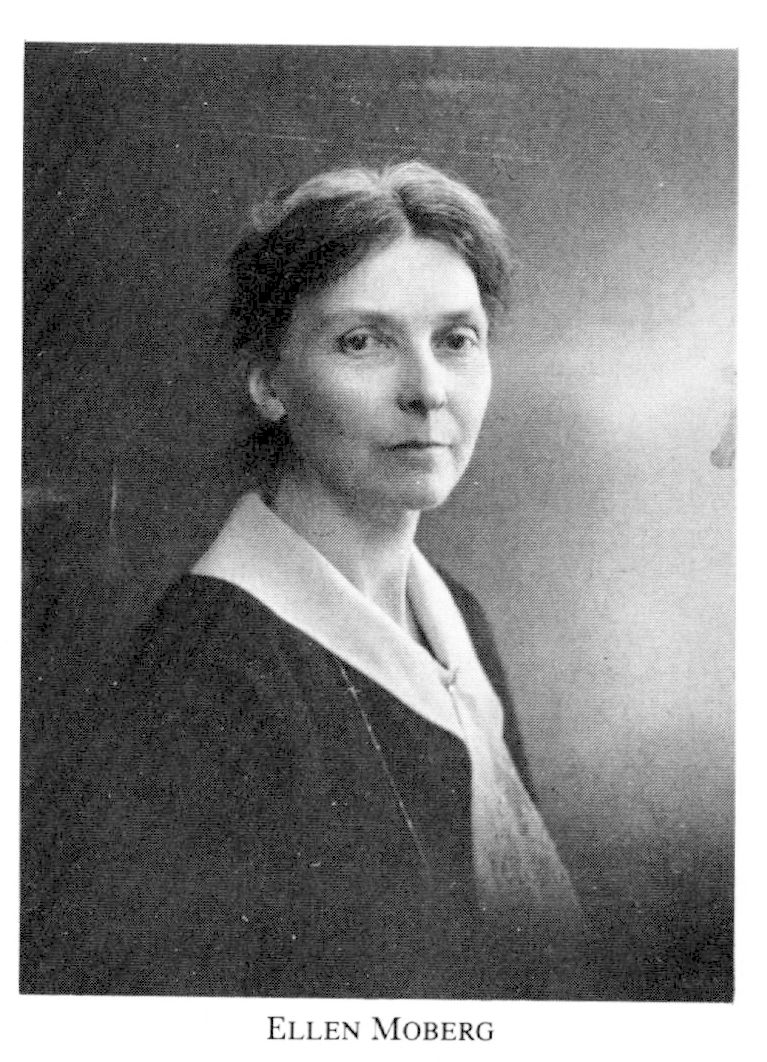