Elsa Stenhammar was a singer, an organist, and a music teacher. She also became Sweden’s first significant female choir director.

Elsa Stenhammar was born in 1866. She spent her earliest years in Stockholm. She was born into two of Sweden’s greatest musical families, the Andrée and the Stenhammar families. Both of her parents were opera singers. Elsa Stenhammar and her twin brother Sigfrid initially received musical training from their maternal grandfather, Andreas Andrée. Her childhood was informed by her parents’ extensive network of contacts which comprised musicians and cultural celebrities. Elsa Stenhammar moved to Gothenburg when her mother, Fredrika Stenhammar, died in 1880. Her maternal aunt, Elfrida Andrée took on the responsibility for Elsa Stenhammar’s musical instruction in Gothenburg.

Elsa Stenhammar lived in the same building in Gothenburg as her maternal aunt, Elfrida Andrée, and they both moved within largely the same professional circles. During the 1890s Elsa Stenhammar increasingly engaged in teaching music, giving lessons on the piano, the organ, in theory, in singing, and in recitation. She performed in concerts put on by Harmoniska Sällskapet and from 1895 onwards she also began to appear in public concerts organised by Göteborgs Arbetareinstitut (Gothenburg workers’ institute), led by Karl Walentin. Elfrida Andrée took over the running of the public concerts in 1897 and – up to her aunt’s death in 1929 – she and Elsa Stenhammar jointly organised 800 concerts. At that point Elsa Stenhammar took on the sole responsibility for running the enterprise until 1936. These concerts were intended for the working classes and should be viewed in the context of the educational ideals of the time: the point was to give everyone access to classical music. The ticket prices were heavily subsidised and the programme on offer spanned the music of Georg Friedrich Händel, through the Vienna classics and Romantic composers, to brand new Nordic music. Elsa Stenhammar’s roles at the concerts also included providing accompaniment to soloists and directing the choir.

There were several different singing ensembles associated with these public concerts. One of them was Folkvisekören, comprising around 10–15 singers. Apart from their numerous appearances in Gothenburg Folkvisekören also toured throughout the country. They performed folk music from different areas whilst wearing local costume and accompanied by traditional instruments.

The Elsa Stenhammar choir began as a ladies’ choir but then expanded to incorporate a mixed-sex choir which gradually gained more exposure at the public concerts. The choir worked with the Gothenburg orchestral association, at that time led by Elsa Stenhammar’s cousin Wilhelm Stenhammar. As a result of this collaboration Elsa Stenhammar was tasked, in 1916, with setting up Göteborgs konserthuskör (Gothenburg concert house choir) and an associated choir school. The konserthuskör gave its first performance in 1917. During the 1920s it came to be viewed as one of the best choirs in Sweden.

From 1905 to 1929 Elsa Stenhammar served as cantor in Gothenburg cathedral, whilst Elfrida Andrée was the organist. Together they were jointly responsible for the cathedral choirs and the concerts. Elsa Stenhammar resigned from the post of cantor in 1929 following the death of Elfrida Andrée. Elsa Stenhammar resigned from her position in charge of the konserthuskör in 1935 a result of personal difficulties with the current conductor of Göteborgssymfonikerna (Gothenburg Symphony Orchestra), Tor Mann. She moved to Stockholm in 1936.

In 1924 Elsa Stenhammar was awarded the royal Litteris et Artibus medal. In 1930 she was elected into Kungliga Musikaliska akademien (the royal Swedish academy of music) as member 596.

From the 1920s onwards Elsa Stenhammar was actively involved in Kvinnliga medborgarskolan (the female citizens’ school) at Fogelstad, an enterprise which she expanded during the years following her departure from Gothenburg. She led Fogelstadskören, lectured on composers, and also gave elocution lessons from 1935 until the school was closed down in 1954. The visual artist Siri Derkert – who attended the school from 1943 – has portrayed the school choir during Elsa Stenhammar’s period. Her portrait captures Elsa Stenhammar’s well-known ability to transfer musical expression and energy to the songs.

Elsa Stenhammar was a highly esteemed, versatile, and knowledgeable individual. Her 85th birthday was marked by a gathering in her honour at which former students and colleagues, including Honorine Hermelin, celebrated her achievements and her ability to enthuse people in their surroundings.

Elsa Stenhammar died in 1960. She is buried at the Norra cemeteray in Solna. 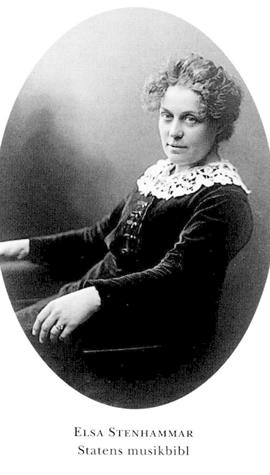