Ester Almqvist was one of the pioneers behind efforts to introduce modern art into Sweden.

Ester Almqvist was born in Bromma near Stockholm. Her parents were teachers at a theology school run by Evangeliska Fosterlands-Stiftelsen (EFS). Her father, Knut Wilhelm Almqvist, was a priest and director of Johannelund school. He died when Ester Almqvist was nine years old. In order to provide for her family Ester Almqvist’s mother worked as a private tutor and book seller. Although Ester Almqvist had been born with a deformed spine, this did not prevent her from becoming an artist. She trained at the technical college in Stockholm from 1888 to 1891 and then at Göteborg Musei rit- och målarskola, later known as Valand art school, where Carl Larsson and Richard Bergh taught. When she was a pupil at Konstnärsförbundet’s school in Stockholm her teachers included Bruno Liljefors and Per Hasselberg. The school had been established as a protest against the academic painting ideals which were being taught at Konstakademien. Ester Almqvist also became a member of Konstnärsförbundet and exhibited with them both in Sweden and internationally, including at the World’s Fair in St Louis, Missouri in the USA, in 1904.

Ester Almqvist settled in Lund from about 1918. She worked, travelled on the continent – for example to Berlin – and exhibited with several other female artists from Scania. These included Tora Vega Holmström, Ellen Trotzig, Maja Fjæstad, Agnes Wieslander and Agda Holst. Her colleague Maj Bring accompanied her to Paris. Her sister, Maria Almqvist, who was financially comfortable thanks to her job as the director of a hospice, also settled in Lund. This was beneficial for Ester Almqvist, whose earnings were quite irregular.

Ester Almqvist’s style is usually described as belonging to the national romanticist and neo-impressionist schools, although from about 1910 onwards she became more of an expressionist. Her most well-known paintings are Hängbjörken, 1900, painted in the national romantic style and Sågverket, decembersol, 1914, which portrays the countryside in an expressionist style. Vibrating rays of sunshine appear to emanate from the winter sun across the entire sky, filling it with a golden light which contrasts sharply with the cool blueish-purple shadows of the buildings.

The year before Ester Almqvist died, in 1934, several female artists, including Siri Derkert, Vera Nilsson and Mollie Faustman, organised an exhibition of her watercolour paintings at Galleri Färg och Form in Stockholm in order to raise awareness of her significance as a pioneer of Swedish modern art. A year after her death her friend Nils Gösta Sandblad (who, at the time, was an assistant at Malmö art museum) organised a memorial exhibition at the Skånska Konstmuseum in Lund with the help of Tora Vega Holmström,. Another memorial exhibition was held in Malmö that year (but not at Malmö Konstmuseum). Three years later, in 1938, a further exhibition was held in Stockholm as well as at Galerie Moderne in Brussels. The contemporary influential art critics Gustaf Näsström, Gotthard Johansson and Nils Palmgren all reviewed Almqvist; and all of them based their reviews on her disability.

Ester Almqvist is the female artist who is represented with most artworks in the collections of Malmö Konstmuseum, a total of 2,083 pieces. She had specified in her will that her collection of oil and watercolour paintings, charcoal, pastel and ink drawings, graphic pages and sketchbooks should be donated to that particular museum. The core of the collection comprises art on paper, and only 13 of the pieces included in the donation were oil paintings. Prior to the posthumous donation the museum only owned a few drawings and six oil paintings by Almqvist. Jönköping’s regional museum also owns several oil paintings by Ester Almqvist, and they held special exhibitions presenting her work in 1978 and 2014.

The Ester Almqvist memorial fund was founded by her sister, Maria Almqvist, and it awards annual stipends, based on the fund’s income, to one or several artists either born in Scania or who are active there. The stipend was first awarded in 1966 to Barbro Bäckström.

Ester Almqvist’s painting Sammankomsten from 1929 was chosen by the postal department of the United Nations for use as a postage stamp to illustrate the 20th article in the United Nations’ declaration of human rights. This article establishes that everyone has the right to freely meet in peaceful assemblies and gatherings.

Ester Almqvist died in 1934. Her grave is located at Norra kyrkogården (the Northern Cemetery) in Lund. 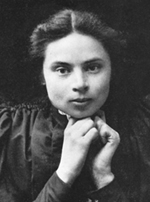