Ester Hermansson was one of the more important pedagogues of the 1900s. She was part of a group of teachers who developed the Swedish model of the ‘learning by doing’ teaching approach during the 1930s.

Ester Hermansson grew up in Gothenburg. She had three siblings, namely, two sisters and a brother. Her father was a fisherman and later a wholesale fish merchant. The children were encouraged to become educated. Within the family the concepts of hard work and paying your own way were considered important. When Ester Hermansson was six years old she began to attend the Victoria school in Gothenburg. She then attended a girls’ school and highschool, both of which were private single-sex institutions. In 1921 Ester Hermansson graduated from the Gothenburg Kvinnliga Folkskoleseminarium (women’s teacher-training programme).

Ester Hermansson’s first post, in 1921, was as a teacher for a class of third-grade pupils in Karlskrona. A year later she became employed in Gothenburg. Throughout her working life she devoted a lot of her free time to further educating herself about teaching. In 1931 a group of Swedish teachers were invited on a study-trip to Vienna. The aim of the visit was to study the post-World War One regeneration of the city of Vienna and school reforms. Ester Hermansson was one of the teachers selected by Gothenburg to represent the city. She met Elsa Köhler, a teacher and researcher, for the first time in Vienna, and with whom she would frequently collaborate during the 1930s and whose book, Aktivitetspedagogik, made a strong impression on her. The advance of the Nazis brought an end to their collaboration, however. Ester Hermansson and her entire family were firmly opposed to the Nazis. It became a matter of importance for her to set up a school which would be able to defend democracy.

It was Elsa Köhler who first introduced Ester Hermansson to American pragmatism (often personified by the philosopher and pedagogue John Dewey). In April 1939 she and her colleague Elsa Skäringer travelled to the USA in order to gain on the spot knowledge of these new pedagogical ideas. Dewey’s successor at Columbia university, Professor William H. Kilpatrick, received the two Swedish teachers and during their stay in the USA they alternated attending university classes with lectures and study-trips to other schools. They also collected various sorts of material to bring back to Sweden: including books, research reports, teaching plans. Their attention was thus mainly focused on the connection between research and classroom practice.

When Ester Hermansson returned to work at the Karl Johan school in Gothenburg she brought all her new impressions and thoughts with her. She gave lectures and ran courses on the new American pedagogy in Gothenburg as well as throughout Sweden. She also authored books on her experiences, and I amerikanska skolor was published in 1940.

During the Second World War Ester Hermansson maintained regular contact with colleagues in Denmark, Norway, and Finland. Following the war the question of how to create independently thinking individuals who espoused democratic values became a central point. Other important issues included the duration of the period of mandatory school attendance and deciding when students should begin studying various subjects. At this time the municipalities were relatively free to run their own local schools and, following an enquiry, Gothenburg education board, which included Ester Hermansson amongst its members, introduced an obligatory eighth year for those students who chose not to carry on to secondary school.

The Gothenburg enquiry was undertaken alongside the national school enquiry of 1940. The school commission, which was politically constructed and contained members of all the parliamentary parties, was appointed in 1946 by the current Minister of Education, Tage Erlander. In order to create a foundation for the commission work another 12 delegations were also appointed. Ester Hermansson was part of this as a member of the course-planning delegation. Its task was to generate an inventory of course plans and experimental agencies in Swedish schools, as well as to investigate and synthesise the findings of research undertaken elsewhere on techniques for timetabling. The chair of this delegation was Alva Myrdal.

The school commission’s Betänkande med förslag till riktlinjer för det svenska skolväsendets uppbyggnad was published in August 1948. In May 1950 the parliament decided in principle to introduce a mandatory nine-year comprehensive school system which would replace all other types of school. It actually took more than a decade to subsequently carry out the decision on primary schools and the new highschools and the teaching reforms which they were based on. During this time Ester Hermansson was working as methodology instructor at Gothenburg teaching college. She also gave lectures abroad, mainly within the Nordic countries. From 1951-1952 she also worked as senior lecturer at the Norwegian teaching college in Trondheim. From 1957-1960 she was director of the Gothenburg advanced co-educational school. In 1960 she accepted an offer to become a teacher in pedagogics at Statens seminarium för Småbørnspedagoger in Vejle, in Jutland. This gave her the opportunity to disseminate Elsa Köhler’s methods regarding observing children and its associated thinking to a new generation of teachers. Meanwhile, in Sweden, work was ongoing to create a new teaching plan for primary schools, Lgr 62. Ester Hermansson was involved in a group which was responsible for the general subjects taught at middle school, and she was delighted to see that many of the principles of reformed pedagogics were expressly provided as guidance for this work: motivation, activity, clarification, individualisation, community, collaboration and group work.

Ester Hermansson returned to her job as methodology instructor at Gothenburg teaching college in 1963 and remained there until she retired in 1937. After retiring in Sweden she worked in Hjörring in Denmark from 1967-1970. Her great interest in education also led to her applying beyond European borders. She participated in conferences and undertook study-visits to Australia, New Zealand, Japan and India, where she met Indira Ghandi, amongst others.

Ester Hermansson worked for sixty years in education: as a teacher, consultant, senior lecturer in methodology, lecturer, and writer. She contributed to the development of the school system both in Sweden and in the neighbouring Nordic countries. In 1974 she published Upplevelser och påverkan, which she herself called her memoires. Her life-long efforts were rewarded in 1977 with the royal Illis Quorum medal. In 1979 she was appointed honorary doctor at Uppsala university department of social sciences.

Ester Hermansson died in Gothenburg in 1989. 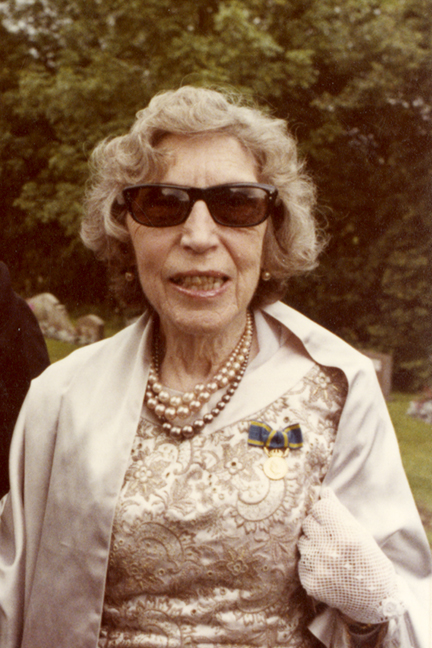