Countess, wife of a privy councillor, first woman to be appointed to Kungl. Vetenskapsakademien

Eva Ekeblad (née De la Gardie) was a countess, the wife of a privy councillor, and the first woman to be appointed to Kungliga Vetenskapsakademien (the Royal Swedish Academy of Sciences).

Eva Ekeblad was born in Stockholm in 1724. She was the daughter of the privy councillor and state marshal Magnus Julius De la Gardie and his wife Countess Hedvig Catharina Lillie. She was the tenth of 14 siblings. All but two of her elder siblings died when young. Her mother, Hedvig Catharina Lillie, was an openly politically active woman who held salons in her home attended by politicians from ‘hattpartiet’ (the hat party).

Eva Ekeblad was one of highest-ranking women in Sweden, both by descent and through marriage, and thus belonged to a privileged social elite. In 1741, when she was just 16 years old, she married Clas Ekeblad the younger, a count, privy councillor, and baron. She received the properties of Mariedal castle and Lindholm castle as dowry. Her husband owned Stola manor in Västergötland and the newlyweds also owned a building known as the Ekeblad house, which stood near what is now Gustav Adolfs torg in Stockholm, on the plot currently occupied by the Royal Swedish Opera.

Eva’s surname is alternately designated as De la Gardie or Ekeblad in the source material. In the early 1700s women would use their maiden names even after they had married. However, towards the end of the century an increasing number of women began to use their married names. Eva signed her letters as Eva Delagardie [sic!] from the time she was married. Despite this, modern reference works list her as Eva Ekeblad.

Eva Ekeblad had her first child, a son, when she was 18 years old. She went on to have another seven children, all daughters, over the course of 12 years. All but one of the daughters survived into adulthood. Her husband was often absent as he was attending to his political obligations. This left Eva Ekeblad, like many other wives of civil servants, carrying the main burden of managing the sizable household at their property. As the wife of a privy councillor she also had extensive hostess duties. Contemporary accounts describe her as being respected as a capable, talented and temperamental woman. According to her son Claes Julius she ran Stola with a firm hand, but was also fair and kind towards her servants as long as they obeyed her and showed her ‘the recognition she deserved’. Her husband died very suddenly in 1771 in the Stockholm council chambers. Eva Ekeblad survived him as a widow for almost 15 years.

Having undertaken experiments with various uses for potatoes, a relatively unknown crop in Sweden at the time, Eva Ekeblad was elected into Kungliga Vetenskapsakademien in 1748. Her husband had already been a member of the Academy for some time. She summarised her experiments in the essay entitled ‘Försök att tillverka bröd, brännvin, stärkelse och puder af potater’ (attempts at producing bread, spirit, starch and powder from potatoes) which was published in Kungl. Vetenskapsakademiens Handlingar that same year. In the essay she described how to bake a tasty type of bread using oat flour mixed with cooked and mashed potatoes. Her most thorough description was of how to make starch, which could subsequently be powdered through grinding and sifting. The making of potato spirit was only very briefly mentioned. This too used cooked and mashed potatoes as its base. Once she had been appointed as a member of the academy Eva Ekeblad continued her practical experiments. A few years later, in March 1752, she summarised her latest efforts. This time she made soap which was intended for use in bleaching cotton-wool.

By appointing Eva Ekeblad to the academy it was hoped that more women would be inspired to develop products which could be useful in households across the country. Eva Ekeblad’s membership of the academy was rather symbolic in nature, however, reminiscent of an honorary membership, as she did not attend any meetings. It was not until 1945 that another female member was voted in as a member of the academy.

Eva Ekeblad’s name is usually connected with her attempt to make spirit. It is sometimes claimed that she even discovered the method for making spirit out of potatoes. However, this method was already known in Sweden at the time of her experiments; the year before she was appointed to the Academy, in 1747, Jacob Albrecht von Lantingshausen published a piece which stated that potatoes could be used for this purpose. In 1747 the Finn Carl Skytte also published a description of how to make potato spirit which also appeared in Kungl. Vetenskapsakademiens Handlingar. However, it may be the case that her experiments were the first practical attempt to make the spirit in Sweden. 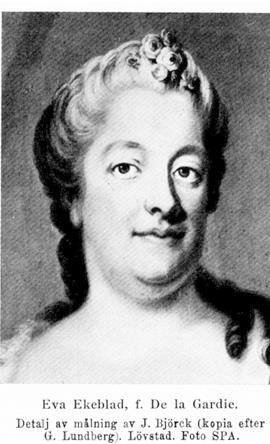