Eva Löwen was a politically active noblewoman who was also a spy for the French. She was a favourite of King Gustav III and the mother of the ‘regicide’ Adolph Ludvig Ribbing.

Eva Löwen was born in 1743. She was the daughter of Axel Löwen, ‘riksråd’ (privy councillor) and governor-general of Pomerania, and his second wife, Eva Horn. It is fair to say that Eva Löwen grew up in a politically dynamic family: her mother was the daughter of Arvid Horn, ‘lantmarskalk’ (lord marshal) of the ‘Mössorna’ (supporters of the ‘cap’ party) and her father had contributed to the ‘hattparti’ (hat party) gaining power during the 1738–1739 parliament. Eva Löwen’s father was appointed governor-general of Pomerania when she was five years old, entailing the family’s transfer to Pomerania. It was there that she met Fredrik Ribbing who was 20 years her senior; later they married. Her husband was an intimate of the Swedish royal family who was appointed privy councillor once the ‘mössparti’ came into power during the 1765–1766 parliament. Eva Löwen thus found herself at the heart of Swedish politics.

Eva Löwen soon became one of the most influential women at the royal court. She has been described as captivating and quick-witted and her romantic escapades were much-publicised. Some of her most famous lovers included the French ambassador Louis Auguste Le Tonnelier de Breteuil and Axel von Fersen the elder. The king himself, Gustav III, even tried to begin a relationship with her but she rejected him.

In all probability it was Eva Löwen’s prominent social role and her connections to eminent men which made her an interesting prospect to the French state. In the years before King Gustav III’s coup d’état she appears on a secret list of people who were in receipt of French state pensions because they in various ways contributed to strengthening the French influence within Sweden. Eva Löwen’s name appears beside the highest amount paid out, which equalled a third of a privy councillor’s salary.

Following King Gustav III’s successful coup d’état in 1772 Eva Löwen maintained her courtly career for a few more years. She became one of the king’s favourite and most treasured conversation companions and gradually she became the dowager queen Lovisa Ulrika’s confidante. In 1778 she was accused of orchestrating the spreading of rumours that the Crown Prince Gustav Adolf was the illegitimate son of Adolf Fredrik Munch, the Crown Equerry, and this led to her banishment from the inner royal circle.

Following the death of Fredrik Ribbing in 1783 Eva Löwen began to live with Gustaf Macklean, with whom she had previously had a relationship. Macklean was not a supporter of the king and after her husband’s death Eva Löwen’s home became a haven for those opposed to King Gustav III. Her son, Adolf Ludvig Ribbing, who was under the influence of ideological currents emanating from France and who also had a personal dislike of the king, thus belonged to the king’s enemies and played a central role in the king’s eventual murder.

Eva Löwen’s son was condemned to die for his crime but, following intervention by Macklean, the punishment was commuted to exile and her son’s loss of his noble title. Eva Löwen and Gustaf Macklean then accompanied her son to Paris and Switzerland.

Eva Löwen and Gustaf Macklean got married in 1796 and then settled at Ström manor in Bohuslän. Following the coup d’état in 1809 Adolph Ludvig Ribbing obtained permission to return to Sweden and was able to visit his mother for one last time. 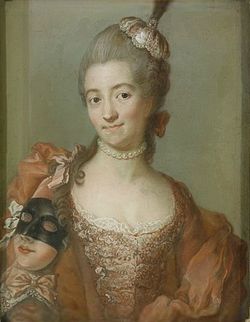