Fanny Alving was a much loved writer of causerie-style columns and an author.

Fanny was the daughter of the bargeman August Lönn, a quiet man with a voracious appetite for knowledge, who loved languages and studied French grammar as a hobby. Her mother was the more loquacious Erika, born Persdotter Jonsson, who grew up on the island of Sela. The couple also had a son, Rudolf, who sadly died an infant. In 1877 the family moved to Traneberg in Stockholm.

After primary school Fanny Alving studied at the Palmgren school, the first co-educational school in Scandinavia. Neither Fanny nor her parents viewed education as a path to a career, but rather as an opportunity to gain access to knowledge. It was “the finest form of leisure” as Fanny’s famous daughter Barbro Alving later wrote.

Fanny Alving graduated as a private student in 1893, which at the time was highly unusual for a woman. After training at a business school, she was hired by the Greek consulate in Malmö, but she soon returned to Stockholm, where she was hired by Linder’s theatre office. Ida Gawell-Blumenthal, later known as Delsbostintan, also worked there and the two of them became good friends. Both of them enjoyed writing. They also shared a common interest in collecting local stories from their hometowns. Fanny had learnt from her mother Erika that the true eccentrics and geniuses can often be found in the countryside rather than in the salons of the big cities.

When Albert Engström started the satirical journal Strix in 1897, Fanny Alving began her career as a causerie-style columnist under the pseudonym “Maja X” and her columns were both much read and much discussed. It took a while before Albert Engström could accept that it was a woman behind the pseudonym: “Women are just not that funny!”, he is alleged to have exclaimed.

Fanny Alving married office director Sven Norrman in 1898. Three years later her son Anders was born and the same year she published her first collection of poems called Galläpplen och paradisäpplen. The collection was illustrated by Albert Engström, Anders Forsberg and Hilding Nyman. In 1904 Fanny Alving published her first novel, Brita i Osterby. The critic and author Oscar Levertin was very harsh in his review in Svenska Dagbladet, particularly in regard to the portions dealing with free love. Fanny Alving took it very personally. She continued to write, but used the secret pseudonym Ulrik Uhland for several years.

In 1906 Fanny Alving and Sven Norrman divorced. The same year she married the lecturer and expert in Nordic languages Hjalmar Alving. The following year her daughter Beat-Sofi was born and in 1909 her second daughter Barbro was born, who would become a renowned journalist under the pseudonym Bang.

Fanny Alving was a productive author and published more than ten novels, short story collections, poems and satirical and comic tales of Stockholm, mainly using pseudonyms. The themes and inspiration for most of her stories came from her hometown, the island of Sela near Stallarholmen in Södermanland. In 1918, she published Josefssons på Drottninggatan, subtitled “a comic detective story”, which made her a pioneer in this genre. Further, her causerie-style columns were published in book form and at the end of the 1920s she began working with the journal Idun. Apart from Levertin’s review in Svenska Dagbladet, she largely received positive criticism. The anonymous signature “PGP” in Aftonbladet summarized her impact on her sixtieth birthday in 1934: “One reads them [Fanny Alving’s books] with pleasure and upon finishing them one has become an iota wiser with very little effort.”

Fanny Alving had a sharp mind and a great sense of humour. She had a deeply held Christian faith, which she transferred to her daughters, but she also suffered from depression and pessimism. In 1936 she suffered a psychotic episode and was subsequently intermittently admitted for psychiatric treatment. Her lasting comfort was the island of Sela, where she kept her parents’ house.

Fanny Alving died in June 1955 and is buried by Ytterselö church in Södermanland. 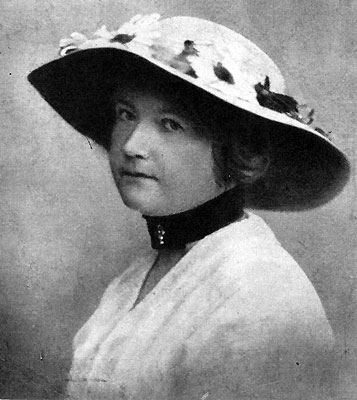