Fanny Westerdahl was an actor and a singer. In both these capacities she was prominent on the royal stages in Stockholm between 1836 and 1862.

Fanny Amalia Westerdahl was, in 1817, practically born in the very place she would end up working. Her father, Carl J Westerdahl, was a royal chamber musician and concert director for Kungliga Hovkapellet from 1801–1829. Her father died shortly after her third birthday. In 1828, when Fanny Westerdahl was eleven years old she was accepted at the Dramaten theatre drama school. The following year she was already considered to be mature enough to perform a minor role in Jean Baptiste Pujouc’s comedy Les Dangers de l’Absence ou Le Souper de Famille. However, her actual debut occurred in 1831 when she performed the part of Caroline in Charles Guillaume Étienne’s comedy Baschan i Suresne. In 1836 she became an employee of the royal theatres.

In 1837 Fanny Westerdahl married another child of the theatre, the 33-year-old actor Carl Edward Hjortsberg. He was considered to be “quite useful in lighter comedies”. Their marriage lasted until 1849 and during this period Fanny Westerdahl performed under the name of Mrs – or Fanny – Hjortsberg. Following the divorce she returned to using her maiden name, albeit with the prefix of Mrs.

Fanny Westerdahl was appreciated for her swift and confident ability to learn, even including mime, and for her fine singing and spoken voice which was considered best suited to major dramatic roles. As the years went by she began to drink to excess, gained a lot of weight, and came to be described as insolent, wanton and coarse – aspects which tend to be appreciated in comedic acting rather than in serious plays. The acting ideals fluctuated as the next generation of actors came to replace the preceding one and, now in her forties, Fanny Westerdahl tended to be employed as an example of “the old, un-nuanced style of declamatory acting”, albeit she could do this with great feeling.

Her most prominent roles were as Amalia in The Robbers and as Louise in Intrigue and Love, both written by Friedrich Schiller, as well as Donna Isaura in Ernst Raupach’s play Die Schule des Lebens, Karin Månsdotter in Johan Börjeson’s Eric XIV, and the title roles in Alexander Dumas’ Mademoiselle de Belle-Isle, Eulalie Pontois by Fredrik Souliès and Friedrich Hals’ Griselda. However she was also much appreciated for her singing in the title role of Nicolo de Maltes’ so-called fairy opera, Cendrillon, as Betli in Adams’ opera Alphyddan, as Papagena in Mozart’s The Magic Flute, and not least Didier in Adolf Fredrik Lindblad’s opera The Rebels* which premiered on 11 May 1835 and ran for sixteen performances.

Following her retirement in 1862 Fanny Westerdahl made several guest appearances and gained the admiration of the choreographer, August Bournonville, who was living in Stockholm at the time and working as a stage manager. In his memoires he commends her ability to use her theatrical instinct and her imagination to cover for some of her educational lacks. 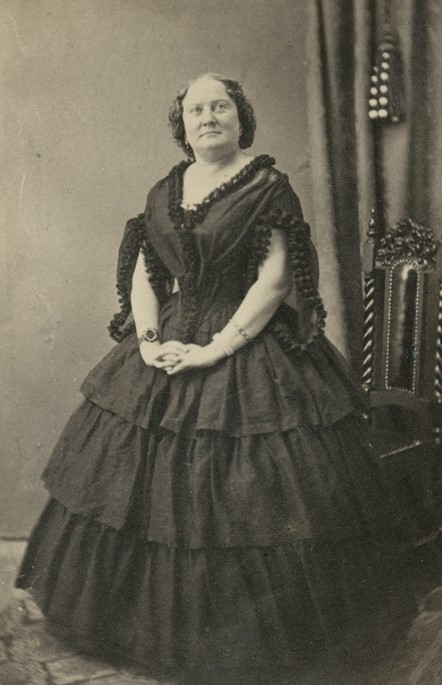