Flory Gate was a trained artist but is far better known for her contributions to ecological agricultural practises and for her close friendship with Elin Wägner.

Flory Gate was born in 1904. She was one of three children born to James Keiller Jr and his wife Alice Lyon. She had two siblings, Douglas Keiller and Irene Carlström, and two half-siblings from her mother’s previous marriage. The Keiller family was of Scottish descent. Flory Gate’s paternal grandfather was Alexander Keiller who had immigrated to Gothenburg in 1825 and set up Gothenburg Mekaniska Werkstad in the 1840s. Her paternal grandfather later took over the enterprise and her father James Keiller Jr worked as a chief engineer there. Her father was awarded the title of chamberlain to the royal cabinet in 1922 whilst her mother became a lady of the bedchamber. The family lived at Avenyn 4 in Gothenburg and had a second house on Särö. King Gustav V would spend a few weeks every summer with the Keillers. Flory Gate thus grew up within a family of a marked upper-class social culture, which included contact with the royal court.

Flory Gate’s own life took a different direction. As a young girl she was happy to spend time at her father’s farm in northern Halland and that was where she learned about farming from the foreman. She drove a roller and sold pigs at the square in Kungsbacka. Later in life she came to focus on ecological agriculture, but this was only after she had trained as an artist. She could draw and for a while she studied art in Paris along with other Scandinavian artists. She appears on a photograph in a book on the artist Otte Sköld, a teacher at the Académie Scandinave Maison Watteau art school in Paris, making it likely that she was in some way involved with that school.

Once she had returned to Sweden, Flory Gate travelled to the Orrefors glassworks in order to train as an engraver and designer. In 1929 she married the artistic director at Orrefors, Simon Gate, who was also a glassworker. They had two children together. Flory Gate first met Elin Wägner at the glassworks when Elin visited the site with her sister and her brother-in-law, the art historian Gregor Paulsson. Flory Gate and Elin Wägner formed a deep friendship that was founded on common interests. They read books on Gandhi, women’s history, and ecological agricultural practises. Flory Gate’s marriage to Simon Gate was short-lived and in the mid-1930s she and the children moved to Gothenburg. By 1938 the divorce had been finalised. Flory Gate longed to be back in the countryside, however, and the following year she bought Rösås farm in Lädja village, part of Berg parish in Kronoberg county. She and her children moved there in order to farm. This move also meant that she lived close to her friend, Elin Wägner.

Flory Gate and Elin Wägner spent a lot of the 1930s travelling together. In 1934 they visited Leningrad and Moscow on a journey that had been organised by the social democratic newspaper Morgonbris. In 1935 Flory Gate participated in the peace demonstration in Stockholm called “Kvinnornas vapenlösa upprop mot kriget” (unarmed women’s action against war), which had been organised by Elin Wägner along with other women from Tidevarvet and the Kvinnliga medborgarskola (civic women’s school) at Fogelstad. Flory Gate also travelled with a delegation to the League of Nations in order to present the resolutions taken at the Stockholm meeting. In Geneva Elin Wägner and Flory Gate had a meeting with The Call Club women’s group and together they set up the Women’s Organisation for World Order (WOWO). Over the course of the following year the two women attended a further three conferences organised by WOWO, which were held in Salzburg 1936, in Bratislava 1937, and in Lucerne 1938. The organisation’s fundamental starting point was the belief that men should not be solely in charge of society and that violence and war did not solve conflicts. Women needed to join together and work for a new world order in which the value of human life was the top priority. Women’s history should be highlighted and ecological agricultural practises would be adopted. Flory Gate found a role model in the Swiss farmer Minna Hofstetter, who gave talks on her efforts to stop soil impoverishment. By composting all biological refuse and returning it to the fields she created a biological cycle. Flory Gate visited her farm during one of her conference trips.

In 1939 Flory Gate drove across Småland with Elin Wägner in order to collect information for Elin’s book Tusen år i Småland. The land at Rösås farm was leased and it was a while before Flory Gate could begin to use it for her own means. During that time she got to know her neighbours by giving courses on vegetarian cooking, weaving, dyeing with plants, and preparing flax. With the help of some farm hands she ran her farms according to a seven-year growing cycle on her fields. She grew greens and root vegetables in her garden. She composted at a time when chemical fertilisers were on the increase and she learned forestry which accommodated wildlife whilst also caring for geese and hens.

Elin Wägner and Flory Gate both shared an interest in local politics, local history and culture. When Elin Wägner set up Bergs hembygdsförening Flory Gate volunteered to be a member of the board. From 1944 and for the following ten years she also supplied the illustrations for the association’s publication, Bergskrönikan. Elin Wägner was a councillor for the Berg municipal council from 1939 to 1942. During this time she was elected onto the accommodation authority and Flory Gate served initially as her substitute but then took over her actual position. Flory Gate herself was elected onto the municipal council from 1943 to 1946.

For varying periods Elin Wägner would live in two rooms, comprising a bedroom and a workroom, which Flory Gate had set up for her at her farm. Elin Wägner died on Rösås farm in 1949. Two years after her death Flory Gate opened a weaving school and smaller rug factory in Lädja village. The intention was to generate employment for women and young girls.

Flory Gate ceased farming in 1967, when she was 63 years old. After retiring she became a peace activist in the Women's International League for Peace and Freedom. In 1982 she inherited money which she invested in a foundation with an accompanying fund called Flory Gates stiftelse Fred med Jorden (Flory Gate’s Peace on earth foundation). Stipends are awarded to women who undertake ecological agricultural practises either on a farm or within a garden centre. The first stipend was awarded just two years later.

In 1985 the director Christina Olofsson made the film Mötet med Flory, in which Flory Gates talks about Elin Wägner’s books and about the relationship between humans and nature. When the Elin Wägner society was set up in 1990 Flory Gate, who was one of its founders, was given the position of vice-chair. She lent great support to a fundraiser which was started in order to buy Elin Wägner’s house, Lilla Björka. In 1994 Flory Gates was awarded Kronoberg county council’s culture prize for her contributions to land management.

Flory Gate kept all the letters Elin Wägner had written to her between 1933 and 1948 as well as a number of minor pamphlets and offprints from their conferences. This material can be seen at Kvinnohistoriska samlingarna (National Resource Library for Gender Studies) at Gothenburg University Library. During the 1970s she was interviewed by Ulla Isaksson and Erik Hjalmar Linder for their two-volume biography of Elin Wägner. 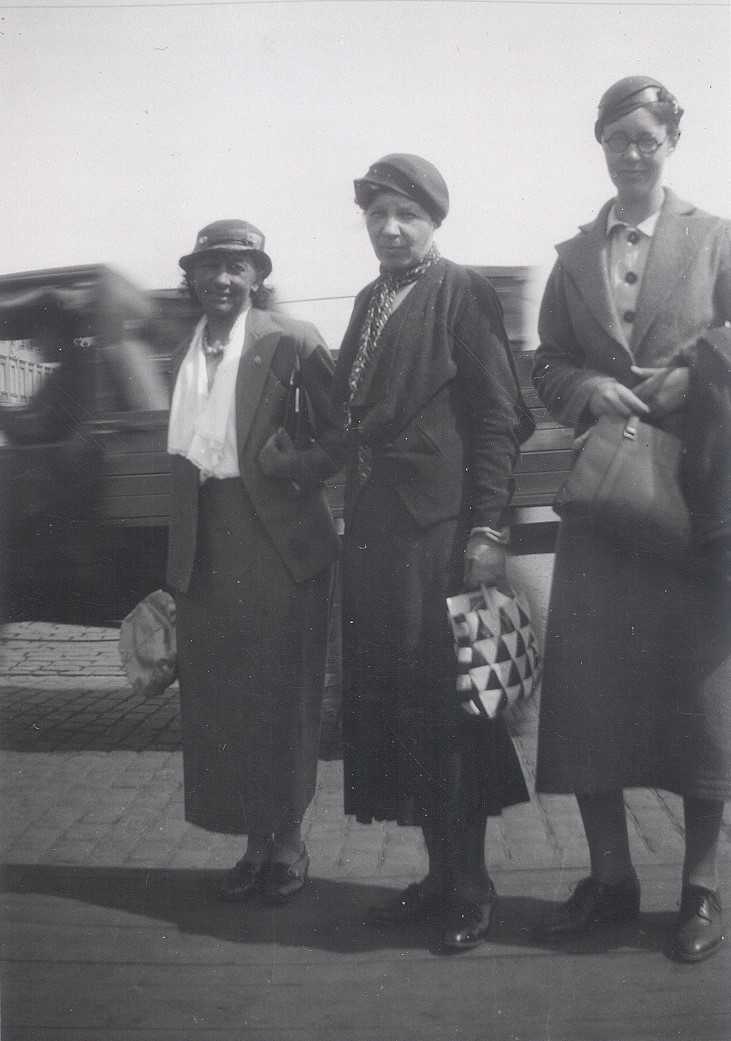