Gerda Bäckström was a driving force in the founding of scouting for girls in Sweden and was for several decades a central leading figure in the girl guides’ and girl scouts’ association: Sveriges Flickors Scoutförbund (SFS). She was also active in the World Association of Girl Guides and Girl Scouts (WAGGGS).

Gerda Bäckström was born on 7 January 1894 in Stockholm, the youngest of the four children of Elisabet Petrea Charlotta Blomberg and August Vilhelm Blomberg, a timber merchant.

In the autumn of 1910, Gerda Bäckström and her classmates Elin Fris and Signe Geijer persuaded three of their teachers at the Wallinska girls’ school to become scout leaders for girls. During the spring of 1911, the enterprise started as a trial under the leadership of gymnastics teacher Emmy Grén-Broberg, Christianity and French teacher Esther Laurell and art teacher Signe Hammarsten. The Wallinska school’s scout association was founded in the autumn that year. Gerda Bäckström was thus one of the trio of young women who through this campaign of persuasion contributed to scouting for girls being started in an organised form. This led some years later to the establishment of the Swedish girl guides’ association Sveriges Flickors Scoutförbund (SFS) on 26 March 1913.

Immediately upon the founding of the scout association at the Wallinska school, Gerda Bäckström was appointed as a patrol leader. She passed the third-class test with the highest possible marks in all sections under the control of her gymnastics teacher and leader Emmy Grén-Broberg, who was generally recognised as being very demanding. In the autumn of 1912, Emmy Grén-Broberg and Gerda Bäckström travelled to England to study the English girl guide organisation and forms of work. In March 1914, Gerda Bäckström was appointed as an assistant leader. She was only a girl guide herself for three years in the organisation that she had worked so hard to bring about, before herself being given the responsibility for leading it.

In 1914–1916, Gerda Bäckström studied at the Gymnastiska Centralinstitutet (GCI) and qualified as a physical education teacher in 1916. The same year, she was appointed to the Wallinska school as a certified physical education instructor.

Gerda Bäckström was a much-liked leader of the Wallinska scout corps and the Stockholm girl guides’ corps of which she became the chief in 1921. Apart from being a leader for girl guides, she also started a senior scout corps for older girl guides and was a driving force in the development of the Brownies for younger girls.

On 2 July 1932, Gerda Bäckström married her cousin Tor Vilhelm Bäckström, a bank manager, in what was described as “a marriage of convenience”. When the Stockholm girls’ school fell under municipal organisation in 1939, the Wallinska school was amalgamated with the Vasastaden municipal girls’ school at which Gerda Bäckström then worked as a certified physical education instructor until her retirement in 1955. After her retirement, she and her husband moved to Tällberg in the province of Dalarna. Her husband died in 1959. During her retirement in Tällberg, Gerda Bäckström was a popular physical education instructor. She was also a driving force in the association for village care (Byalaget för hembygdsvård, now Tällbergs Hembygdsförening), and among other things as the chairwoman and a guide at the local museum.

The SFS was operative for 47 years. During most of that time, Gerda Bäckström was a member of the association leadership. She was present as a girl guide at the association’s founding meeting on 26 March 1913, and she participated in the meeting shared by girl and boy scouts on 13 November 1960, when the two groups joined together in the new association Svenska Scoutförbundet. Gerda Bäckström had already been suggested as a member of the first association board when the SFS was founded in 1913, but she had abstained then. In 1925, she was elected as the vice chief of the girl scouts, and after a decade in that position, she was elected chief of the girl scouts in 1935. She retained that post for 14 years. When Gerda Bäckström resigned in 1949, she had been operative in the leadership of the SFS for almost a quarter of a century. Under her leadership, the SFS expanded greatly. The membership more than doubled, the economy stabilised and the association was able to open an office with employees to support local enterprise. The girl scouts’ movement became an important factor in the Swedish civil community through its international peace work, its humanitarian endeavours, and its contributions to the defence force during the second world war, for example. In connection with Gerda Bäckström’s resignation in 1949, the Gerda Bäckström scholarship was instituted through a subscription. The scholarship has since then been awarded by the SFS, by Svenska Scoutförbundet and finally by Scouterna.

Apart from being active in the girl scouts’ movement, Gerda Bäckström was also active in the central council of the Youth Red Cross (Ungdomens Röda Kors, URK, now Röda Korsets Ungdomsförbund) and on the board of the cycling association Cykelfrämjandet from its foundation in 1934. During the second world war, she was active on the board of the women’s organisations’ wartime committee and she was involved in the association helping Finland.

Gerda Bäckström died on 23 April 1978 at the Leksand nursing home. 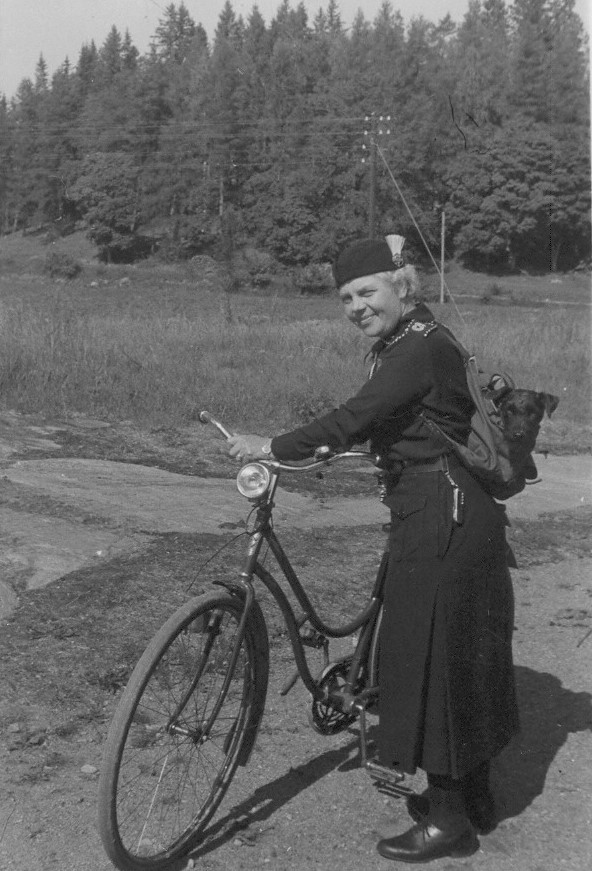