Gerda Grepp was the first Scandinavian journalist to report from the Spanish Civil War in 1936. She wrote for the Nordic workers’ movement newspapers, including the Swedish Social-Demokraten. She was a committed anti-fascist, a socialist, and a feminist who focused on civilian populations’ experiences of war.

From an early age Gerda Grepp would accompany her parents on demonstrations, meeting political figures such as Aleksandra Kollontaj, with whom she formed a warm and lifelong friendship. The letters she wrote to Kollontaj are all signed off with “your daughter Gerda”.

The family was hit hard by tuberculosis: Gerda Grepp’s parents had already lost a son to the illness before she was born, and in 1922 Kyrre Grepp died from the illness. Gerda Grepp had been very close to her father and his death hit her hard. In the autumn of 1923, when she was meant to begin high school, Gerda Grepp instead went to live with her maternal grandparents in Fjøsanger. Gerda Grepp began attending the Arbeiderpartiets study association in 1924. Her eyes were opened to the possibility of becoming a journalist and she then read socioeconomics and history. On completing her education she attended a school for housewives in Copenhagen but this was not to her liking.

In 1925 Gerda Grepp went to Vienna to live with Angelica Balabanoff, a teacher. Balabanoff was an active socialist who was friends with Gerda Grepp’s parents and with Aleksandra Kollontaj. Gerda Grepp learned German and French from Balabanoff. Indeed, during the 1920s, Balabanoff’s home became a meeting place for Italian communists who had fled the encroaching fascism in Italy. This was how Gerda Grepp met Mario Mascarin, a journalist who later also became a ceramist. The couple married in Oslo in 1925 and later settled in Lugano, Switzerland, with their son, Olav Kyrre, who had been born in Norway in 1926. Gerda Grepp did not adjust to life in Switzerland, using her time to begin writing short stories and to translate pieces for Vor Tid and Arbeiderbladet.

In 1936 Gerda Grepp travelled to Barcelona, where she was the first Scandinavian journalist to report on the outbreak of the civil war which followed General Franco’s fascist troops’ attempts at a coup d’état against the popularly-elected republic. Gerda Grepp wrote for the Swedish newspaper, Social-Demokraten, amongst others. She had spent the time prior to this in Zürich and Paris, meeting many other anti-fascists and journalists en route towards Spain. Amongst these people was Egon Erwin Kisch, one of her idols. He believed that it was impossible to be an objective journalist and they both agreed that clear communication was the basis for good journalism. Gerda Grepp thus never sought to hide her anti-fascist leanings when reporting.

In 1936 Barcelona was being led by a hopeful left-leaning coalition under the anarchists. Gerda Grepp described her experiences enthusiastically but was keen to get closer to the war front and so she travelled to Madrid. She was once again the first Scandinavian reporter to arrive there and for a long time also one of only two female reporters, the other being the German Ilse Wolff. Gerda Grepp and the other female war correspondents in Spain, such as the American Martha Gellhorn, were groundbreakers. They headed out into the streets and interviewed civilians as bombs fell around them. This was a new type of war journalism as male correspondents tended to report from within the trenches.

Gerda Grepp quickly gained a focal position among the journalists whilst the German bombing raids came to be known as “the battle for Madrid”. This was one of the first to target civilian populations and Gerda Grepp as well as the Spanish foreign ministry hoped that support for the republic would be awakened in Sweden and Denmark. Throughout the West people volunteered to help but no official state support was forthcoming. When the Soviet Union became the sole government to respond favourably they inevitably became heroes to many, including Gerda Grepp.

In Madrid Gerda Grepp met the American journalist Louis Fischer, who was married, and the two began an open relationship which lasted for the rest of their lives. They travelled and worked together across Spain providing Gerda Grepp with a new network of contacts. In 1937 Gerda Grepp returned to Scandinavia in order to raise awareness for the Spanish cause. She met and became friends with the Spanish ambassador in Sweden, Isabel de Palencia.

That year, 1937, Gerda Grepp and her fellow journalist friend Arthur Koestler headed off to Malaga, despite many friends having warned them of the dangers there. They were the last two journalists to flee the city when Franco’s troops besieged the city in February 1937. When Arthur Koestler was captured Gerda Grepp was the last person to report on the final days in the city. Just as in Madrid Gerda Grepp once again foresaw the bloodbath that Franco’s victory would entail. She wrote about Malaga in five reports for various Scandinavian papers. When Arthur Koestler’s wife, Dorothy Ascher asked for her help in discovering what had happened to her husband Gerda Grepp accompanied Ascher to London and participated in a major international conference in support of Spain. The editor of the Norwegian newspaper Arbeiderbladet, Martin Trammæl, and that of the Swedish Social-Demokraten, Zeth Höglund, were also present. At the same time several conferences for various aid groups were also ongoing. Gerda Grepp was the sole representative from Scandinavia to speak at them.

Gerda Grepp attempted to treat her tuberculosis in France by taking rest and good food at a farm outside of Paris. She required new commissions as she could not make ends meet by selling articles to Scandinavian newspapers and was tied to Agence Espange. At this time many Western journalists were writing for that agency, particularly whilst the European press was often supportive of Franco during the Spanish conflict. Gerda Grepp apparently knew very little of the spying activities which Otto Kantz engaged in.

In 1937 Gerda Grepp went to Bilbao in the Basque country. She was excited about the risky time ahead of her, for the first time she would be paid for her travel, accommodation, and she would get a fixed salary. It was here that the bomb raid on the civilian population of Guernica in April 1937 had generated major protests worldwide. In addition to reporting from the front Gerda Grepp was to observe the evacuation of 4,500 women and children to France. Not only did Gerda Grepp report from the trenches and on the state of civilian life, but she also interviewed captured Franco soldiers in an attempt to understand their thoughts. Her many years of experience meant that other journalists often turned to Gerda Grepp when seeking information. The starvation and the suffering that she witnessed took its toll on her already ailing body. On 14 June Gerda Grepp left Bilbao on a vessel full of refugees – it was the only open way out. A few days later Bilbao fell.

Gerda Grepp spent the summer in Spain with Louis Fischer before returning to Scandinavia. She was commissioned by both the Norwegian Spanish-aid committee and the Swedish Spanish committee and spent the autumn giving talks, which were always fully subscribed events. The places she spoke at in Sweden included Kiruna, Malmberget, Boliden, Skelleftehamn, Storvik, Arvika, Stockholm and Gothenburg. In November Gerda Grepp and her children moved to Paris. There she wrote articles on prominent French women for the likes of Social-Demokraten. She also served as leader of Scandinavian delegations to Spain. In January 1938 she led a group on a visit to Bilbao. The optimism of 1936 had vanished. The city was still being subjected to daily bombing raids and the various left-leaning groups had fallen into mutual conflicts. Gerda Grepp and her touring group had to seek shelter in a nunnery in the mountains. Gerda Grepp was invited to return and work for the international brigades but once she returned to Paris both she and one of her children fell seriously ill. They had to return to Norway.

In 1939 Franco won the fight in Spain and then the Second World War broke out. The non-aggression treaty between the Soviet Union and Germany meant that Gerda Grepp and her friends were left disappointed and confused. Many were forced to flee, or ended up in camps, or were outright executed. Gerda Grepp tried to help friends make their way to Norway but with little success given that Norway ran an exceedingly restrictive refugee policy. That same year she travelled to Sweden in order to write Aleksandra Kollontaj’s biography. They went on long car journeys throughout the country, took walks, and discussed politics, all the while Gerda Grepp carried on working on the book despite being very ill herself.

In 1940, as the Soviet Union invaded Finland, Gerda Grepp distanced herself from Stalin’s version of socialism. Gerda Grepp died from tuberculosis at Ullevål hospital in Oslo on 29 August 1940, just a few months after Germany had invaded that country. She never completed the Kollontaj biography. Following Gerda Grepp’s death her mother was arrested by the Germans, although she managed to escape to Sweden. Her brother, Asle, was executed for being in the resistance in February 1945. 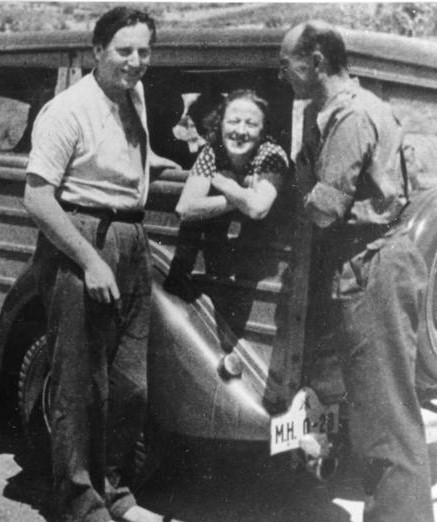