Marie Fredriksson was a singer, songwriter and painter who became one of Sweden’s most successful and beloved artists. Internationally she was known as lead singer and member of the duo Roxette, which sold over 80 million records worldwide.

Marie Fredriksson was born in 1958 in the small southern Swedish village of Össjö, as the youngest of five siblings. She moved to Östra Ljungby with her family when she was young. As a child, she loved singing, took piano lessons and was very interested in artistic and creative subjects at school. She started studying finance in upper secondary school, but soon realised that she wanted to work creatively, and started studying music at Fridhems folkhögskola in Svalöv. There she was introduced to jazz and soul, which became big influences for her, besides popular music from the 1960s and 1970s. It was then that she started to consider a musical music.

After graduating from music school in 1977, Marie Fredriksson moved to Halmstad, where she worked a few temporary jobs and in theatre. In 1978 she joined the local punk band Strul. It was around this time that she got to know Per Gessle, as they shared the same rehearsal studio. After Strul split up, ex-band members Martin Sternhufvud and Marie Fredriksson formed MaMas Barn and released the album Barn som barn in November 1982.The band split up in early 1983.

That same year, EMI Svenska AB offered Marie Fredriksson a record contract as a solo artist. She initially refused, as she felt she lacked the confidence, but eventually she agreed. She co-wrote and recorded her first solo album Het Vind with Lasse Lindbom, who also produced the album. The power ballad “Ännu doftar kärlek” was released as the first single in May 1984. It became a hit in Sweden that summer and would become one of her most well-known songs. The album, released in September 1984, reached the top 20 in Swedish album charts.

In order to try an international career, EMI Svenska AB suggested Per Gessle and Marie Fredriksson should record a duet together in English. They released “Neverending Love” as Roxette in July 1986, which reached number three in Swedish charts. In October 1986, Roxette released their first album, Pearls of Passion and embarked on their first tour, Rock runt riket, in summer 1987, with co-headliners Ratata and Eva Dahlgren. From then on, Marie Fredriksson kept working on both her solo career and Roxette. In October 1987, she released her third album ...Efter Stormen, which was certified platinum by the Swedish Recording Industry Association.

Roxette’s second album, Look Sharp!, was released in Sweden in October 1988. It was a success, debuting at number one of the Swedish album chart, where it stayed for 22 weeks. The album would also become the duo’s international breakthrough. That year Marie Fredriksson also contributed to a tribute album to Cornelis Vreeswijk, Den flygande holländaren, with three songs, including “Felicia - adjö”, which became her first number one on Svensktoppen.

In February 1989 Marie Fredriksson released “Sparvöga”, a song she wrote as the theme music for a mini-series of the same name, based on the novel by Ann-Charlotte Alverfors. The song was a success and has been described by critics as one of the most beautiful ballads ever written by a Swedish artist. That year, Marie Fredriksson won the Grammis award for best Pop/Rock female artist and her fourth consecutive Rockbjörnen Award for Best Swedish Female Artist.

In January 1989 Roxette released “The Look”, the fourth single from Look Sharp! in Sweden. To the duo’s surprise, “The Look” entered the US Billboard Hot 100 charts a month later. American exchange student Dean Cushman had returned from Sweden with a copy of Look Sharp! and had asked the local Minneapolis Top 40 radio station KDWB to play “The Look”. The song quickly became popular and immediately spread across the whole country, reaching number one in the US in April 1989 and topping the charts in 25 countries. “Listen To Your Heart” would also reach number one in US Billboard Hot 100 and top the charts in many other countries. As per October 2020, “Listen To Your Heart” has been played six million times on American radio stations and television.

In 1990 Marie Fredriksson recorded a very simple and emotional version of Evert Taube’s “Så skimrande var aldrig havet“ for the tribute album Taube. This song became one of her favourites and she performed it on many of her tours. In the same year, Roxette contributed to the original soundtrack of the film Pretty Woman with “It Must Have Been Love”. The song brought Roxette’s third number one in Billboard Hot 100 and became one of the group’s most successful and well-known songs. By 2014 it had reached five million radio plays in the US.

In February 1991 Roxette released their third album, Joyride. It stands as the duo’s most successful release, with 11 million copies sold worldwide. The single “Joyride” became the duo’s fourth number one in Billboard Hot 100. The following Join the Joyride! world tour lasted 10 months. Marie Fredriksson met her future husband Mikael Bolyos in Sydney during the Australian leg of the tour in December 1991. They married in May 1994 and would come to have two children, Inez Josefin and Oscar Mikael.

Marie Fredriksson was engaged in various social and environmental causes. In July 1992, she recorded the song “Änglamark'' with Anni-Frid Lyngstad, Håkan Hagegård and Tomas Ledin to raise awareness of environmental issues. She had previously participated in the ANC Gala in 1985 to raise funds for the fight against South African Apartheid. She also performed at Europride in 1998, at the Artister mot nazister gala in January 2001 and the QX Gay Gala in 2009.

Marie Fredriksson released her fourth solo album, Den ständiga resan, in 1992. The album has been labelled her “darkest”. Her own explanation for this was that she sometimes felt lonely and overwhelmed by her fam on tour with Roxette. This was her most commercially and critically successful studio album, selling more than 185 000 copies. She was awarded the Grammis for Artist of the Year in 1993.

In April 1994 Roxette released their fifth album Crash! Boom! Bang!. Roxette went on an international tour in 1994–1995 and performed for more than one million people. As part of the tour, they became the first western act since Wham! to be allowed to perform in China, but only after a long procedure, which included the group having to self-censor some of the lyrics. In 1996 Marie Fredriksson’s fifth solo album I en tid som vår was released. It was certified platinum and the single “Tro”, one of her most well-known and appreciated songs, stayed 29 weeks in Swedish Single Chart.

In 2000 she released her first greatest hits album, Äntligen – Marie Fredrikssons bästa 1984–2000. The album was certified triple platinum and was the second best-selling album in Sweden that year. The release was complemented with a summer tour of Sweden, with Marie Fredrikson performing for more than 110,000 people.

After releasing two further albums, Have A Nice Day in 1999 and Room Service in 2001, Roxette embarked on a European tour in 2001 and had planned to join the Night of the Proms concert series in 2002. However, on September 11th, 2002, Marie Fredriksson was diagnosed with a malignant brain tumour. She underwent surgery, followed by months of chemotherapy and radiation treatment. In the following years, she would suffer greatly from the side effects of the treatment. Her first public appearance after the diagnosis was in January 2003 to receive the Litteris et Atribus medal from King Carl XVI Gustaf of Sweden. After this, Marie Fredriksson released a number of solo albums, including The Change, her first solo album in English, which was released worldwide in 2004. Marie Fredriksson and Mikael Bolyos had worked on this album at their home studio in Djursholm as a form of therapy.

Because of the treatment leaving her unable to read or write, Marie Fredriksson rediscovered her love for painting and drawing. She held two art exhibitions with her drawings: After the Change in Stockholm in October 2005 and A Table in the Sun in Stockholm and Gothenburg in 2008. In October 2008 Marie Fredriksson joined the concert series Stjärnklart and performed live for the first time since her diagnosis.

In May 2009 Marie Fredriksson surprised all her fans as well as the press by joining Per Gessle on stage in Amsterdam to perform two Roxette songs. The day after Roxette announced that they would be part of the 2009 edition of “Night of the Proms”, as they had intended in 2002. Roxette released another two albums in 2011 and 2012, Charm School and Travelling, which were followed up by world tours.

Throughout their career, Roxette released live recordings from almost all their tours, including sets in Sweden, Sydney, Johannesburg and South America. These recordings capture Roxette's massive international success. They also showcase what an amazing live performer and unique artist Marie Fredriksson was. She owned the stage and captivated the audience with her incredible voice and presence. For health reasons, touring became harder for her as time passed, but she fought to overcome those hurdles and gave it all to be on stage and meet her fans again.

Marie Fredriksson also performed for the Swedish royal family on a number of occasions, including at the wedding of Crown Princess of Sweden, Victoria, and Daniel Westling in June 2010, and the wedding of Swedish Princess Madeleine and Christopher O’Neill in June 2013.

In November 2013 Marie Fredriksson released her eighth and last studio album, Nu!. The album was one of the biggest-selling albums of the year in Sweden and was followed by her first solo tour since 2000. In October 2015, her autobiography Kärleken till livet, written together with Helena von Zweigbergk, was published. In the book, Marie Fredriksson tells about her humble childhood, her career, her illness, her passion for performing live and her comeback. The book has been translated into Spanish, Hungarian, Czech and German.

In October 2014 Roxette embarked on their 30th Anniversary Tour, which was to be their last ever. They intended for the tour to return to Europe in the Summer of 2016, but those concerts had to be cancelled in April 2016, after doctors advised Marie Fredriksson to focus on her health. In June that year, Roxette’s tenth and last studio album, Good Karma, was released. After she announced her retirement from touring, Marie Fredriksson did not make any public appearances besides a few personal photos taken at her home in Djursholm, thanking her fans for flowers she received for her birthdays. She released three singles in 2017 and 2018.

Marie Fredriksson died at the age of 61 on December 9th, 2019, following a 17-year-long battle with cancer. Fellow artists, colleagues, friends, fans and media from all over the world mourned the loss of a powerful woman and amazing artist who could sing the most forceful rock song and a moment later the most emotional ballad. A tribute concert in memory of her took place in Gothenburg on January 20, 2020, where various Swedish artists and close friends performed a selection of her and Roxette’s songs.

One of the last recordings Marie Fredriksson did with Roxette was released in October 2020. The song “Let Your Heart Dance With Me” had been recorded for Good Karma but in the end was not included on the album. 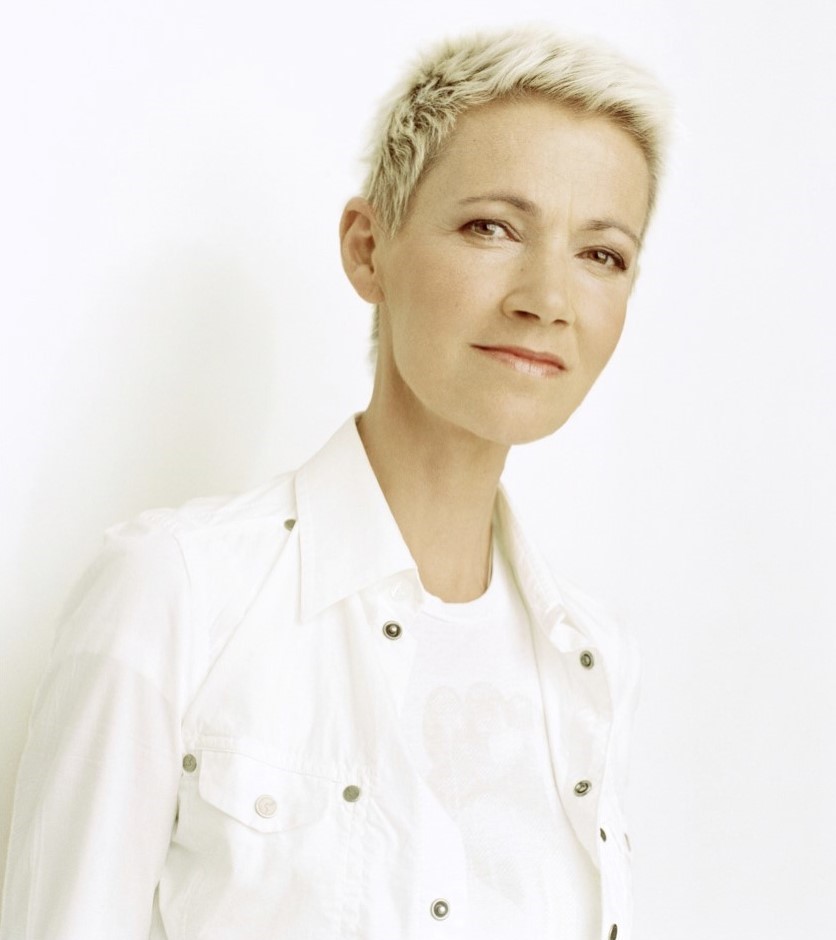