Gunhild Tegen was an author and a translator who was a peace- and women’s rights activist for most of her life.

Gunhild Tegen was born in Njurunda parish, in Västernorrland county, in 1889. She was the daughter of sea captain Johan Petter Nordling and his wife Maria Erika Dahlén. She became a qualified public school teacher in 1910 and then studied at Uppsala university from 1911–1912. She worked as a teacher at the Sundsvall girls’ school from 1913–1914. She married Einar Tegen, later professor of practical philosophy, in 1915. The couple moved back to Uppsala and in December 1916 their daughter, Inga was born, followed three years later by their son, Martin.

During the 1920s Gunhild Tegen worked for a number of journals, writing short stories as well as articles, including causerie-style articles. She also worked as a translator for the Lindblad publishers in Uppsala. Her first book, Eros i Uppsala, was published in 1929 under the pseudonym of Tor Tilja and is based on autobiographical material from her time in Uppsala. She and her family moved to Lund in 1931 following her husband’s appointment as professor at the university there.

In the spring of 1934 Gunhild Tegen read a report on the situation in Germany. It had been written by a German parliamentarian, Gerhart Seger, who had been imprisoned on 14 June 1933 and then taken to a newly-established concentration camp. He had made his escape and then written his report, which was printed in Karlsbad. The report influenced Gunnel Tegen’s work on a film manuscript in 1935 which was based on the plight of the Jewish population, entitled En judisk tragedi. In 1933 the Svensk Filmindustri (SF) (Swedish film-production company) had advertised a film manuscript competition, for which they received 694 submissions. Gunhild Tegen’s manuscript was given honorary mention. En judisk tragedi was later published by the Lunds Studenters Filmstudio, along with a foreword by Marika Stiernstedt. It was never produced as a film as the subject matter was considered far too controversial.

Both during and after the Second World War Gunhild Tegen was involved in Kommittén för insamlingen för landsflyktiga intellektuella (the fundraising committee for exiled intellectuals) and she was also active in refugee aid work and the peace movement. On 30 November 1934 she published an article in Lunds Dagblad entitled “Vem vill krig?”. Following Einar Tegen’s appointment to a job at Stockholms högskola (college) in 1937 the Tegen couple moved to Stockholm.

Gunhild Tegen wrote and translated works in various genres. She wrote short stories, lyrical works, and autobiographies. Her books En flicka växer upp and En fattig studentska contained autobiographical themes and were published during the 1930s. Gunhild Tegen was an admirer of Frida Stéenhoff and there are clear links between her novel Slavar and Frida Stéenhoff’s Sin nästas hustru. Gunhild Tegen was in close contact with the writer Nelly Sachs, who had arrived in Sweden as a refugee in May 1940. Gunhild Tegen’s novel Jakobs skuga, from 1953, includes mention of both Sachs and the refugee situation.

Further to her writing activities in the 1930s Gunhild Tegen was also involved in public debates through the articles she submitted to Arbetaren and Morgonbris, the short stories published in Dagens Nyheter, as well as three essays carried by Allt om äktenskapet, published in 1934. She was the chair of the Malmö-Lund Yrkeskvinnors klubb (career women’s club) and she was involved in setting up the first Home- and School organisation in Sweden. She was a member of Sveriges socialdemokratiska arbetareparti (SAP) (Social Democratic workers’ party of Sweden) until 1943 when she left the party in protest against Sweden’s limited refugee policies.

During the Second World War the Tegen couple undertook a lengthy visit to the USA which Gunhild Tegen has portrayed in her book Jorden runt i krigstid. After the war ended she – along with her husband – primarily worked on documenting the stories of refugees and those who had survived the Nazi death camps. This work was published in her book De dödsdömda vittna, published in 1945, mainly edited by Gunhild Tegen.

In 1950 Gunhild Tegen had been asked by the Svenska Landsbygdens Studieförbund (SLU) (rural Swedish study association) to set up a study group on the subject of marriage and its associated problems and how these had found expression within literature.

Gunhild Tegen was active within the Samarbetskommittén för demokratiskt uppbyggnadsarbete (SDU) (collaborative committee for democratic reconstruction) which had sprung out of Fredshögskolan (College of Peace) and Greta Engkvist’s work there. Gunhild Tegen was also engaged in Världssamling för fred (global coalition for peace) and Internationella Kvinnoförbundet för Fred och Frihet (international women’s league for peace and freedom). During the 1940s she travelled to the Soviet Union to visit the daughter of Sonja Kovalevsky. Gunhild Tegen also visited China. At that time she was actively involved in Svenska Kvinnors Vänsterförbund (Swedish women’s left-wing federation). 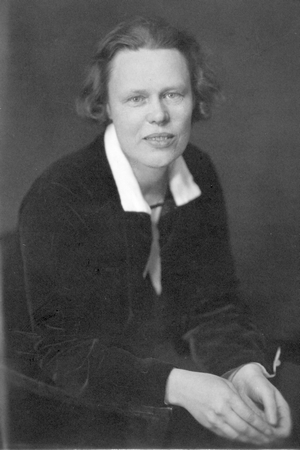