Gunnel Broström was an actor and director of theatre and television. She was a pioneer within the sphere of Swedish TV theatre programming.

Gunnel Broström was born in Stockholm in 1921. She was the daughter of Erik Broström who worked for the Stockholm tram system. She began to display an interest in performing at an early age and took lessons for ballet dancer and teacher Lalla Cassel. However, she was forced to give up her studies and begin working.

She remained determined to become an actor and eventually took acting lessons, despite her father’s opposition. She took elocution lessons from Manda Björling at Stockholms Borgarskola and her tutor encouraged her to carry on. In 1941 Gunnel Broström was accepted to acting school at Dramaten, the Royal Dramatic Theatre. She made her stage debut while still a student, appearing in Jacques Offenbach’s Orphée aux enfers at the Royal Swedish Opera in 1942. Upon graduating from the school in 1943, she gained a fulltime job at Dramaten. Her big public breakthrough on stage was in 1946 when she performed in Jean-Paul Sartre’s Huis Clos. She also set off on a productive film career. In 1948 she was awarded the Anders de Wahl stipend from the Swedish Union for Performing Arts and Film, as well as the Pontus Nohre stipend which enabled her to undertake a study tour to Paris and London. During her travels she met Mai Zetterling and they became close friends.

The public’s view of Gunnel Broström at this and later times was markedly sexist, a perception fuelled by the the roles she was given. Her private life also fell under the limelight. According to a later article, published in the newspaper Aftonbladet in 1987, she was considered a “sex-bomb” by her contemporaries. She found, like many of her contemporary female actors, the label humiliating and hard to bear, and she struggled to be taken seriously as an actor. Indeed, it may have been this struggle that led her to change her professional career towards the end of the 1940s.

In 1949 Gunnel Broström resigned from her job at Dramaten and moved to the USA. There she married an aviator and settled in a Los Angeles suburb. She never acted in the USA. On her departure from Sweden she had mentioned vague plans of undertaking studies in language and history of the theatre, although this never came to pass. According to an interview with Gerd Osten in 1953 Gunnel Broström claimed she had just headed off without any particular plans apart from wanting to have a family and to lead a normal life. She was not particularly drawn to the American film industry, and the theatre world of the East Coast of the USA was too far away. In a 1951 interview published in Vecko-Journalen, Gunnel Broström confided in Marianne Höök that she felt a strong sense of ennui with the American lifestyle. When she became widowed in 1952 she returned to Sweden. A couple of guest appearances on the stage re-ignited her desire to act. According to the above interview she had begun to miss her work, her colleagues, and rehearsals. After having spent a season at Helsingborg City Theatre she became employed at Gothenburg City Theatre in the autumn of 1955. She remained there until 1958 when she joined the newly established TV theatre ensemble. From 1960-1967 she was once again employed at Dramaten.

Following a lengthy absence from the stage Gunnel Broström was invited in 1987 by Stefan Johansson, head of Teater 9 in Stockholm, to make a guest appearance in a play called Kvartett. She later appeared there again, in 1992, performing a monologue about Karen Blixen. This performance was a major triumph for her.

During the latter part of her career Gunnel Broström began to direct, particularly for the Swedish TV theatre, eventually resulting in 24 productions from Ateljé Mia in 1965 to Av hjärtans lust in 1984. According to Bengt Forslund, she encountered some resistance from the then acting head of TV theatre programming, Henrik Dyfverman, who had no particular interest in female directors. In an article published in the Expressen newspaper in 1969 Gunnel Broström claimed that, as a new female director, she found it incredibly difficult to direct the plays she wanted to work on and that she had had to nag her way into directing the first four plays she was keen on.

It is striking how many of her productions focus on women. These includes classics such as Antigone in 1981, and August Strindberg’s Creditors in 1968, which was a new iteration of this play in which the same actor play both male characters. Her output also included newly written drama such as a 1975 production of R.W. Fassbinder’s Bremer Freiheit, about a female poisoner. According to reviewers, Gunnel Broström had fully grasped Fassbinder’s concept of “anti-theatre”.

She consistently received a lot of praise for the way she staged her productions and her directing skills. She worked with several of the great female actors of the time including Inga Tidblad. Åke Janzon lauded the combined intuition of Gunnel Broström and Mai Zetterling, which he argued had generated something rare and unique, in a 1978 review of play Stulet nyår. Bengt Forslund believed that her strength lay not so much in her visual work as in her intuitive nature and in her portrayal of female roles.

Gunnel Broström was a multifaceted actor. At the beginning of her film career she played a range of “femme fatale” roles in which her sensual charisma was an advantage, as seen in the 1946 film Barbacka which was ahead of its time. Her own favourite role from the period before she moved to the USA was that of Marguerite in Brott i sol, from 1947. Marguerite is a girl who knows what she wants, who is anything but sentimental in her approach. She would, eventually, be given more dramatic and robust roles. In the 1954 film Storm över Tjurö she played a hardy girl from the archipelago. That same year she played one of her most talked-about roles, that of the fisher girl in Salka Valka, an adaptation of the Nobel-prize winner Haldor Kilian Laxness’s novel. However, she also proved that she could perform great comedic roles such as that in Arne Mattsson’s Ryttare i blått, from 1959. One of her later TV-roles was the part of the aristocratic wife of Colonel Ekenstedt in the 1981 series Charlotte Löwensköld och Anna Svärd, based on the 1979 film Charlotte Löwensköld.

Reviewers tended to make reference to her physical charisma. Marianne Höök described her in the 1951 interview as “a face which alternates between that of a fierce animal who is ready to lash out, with a certain bloodlust, and a faint, elevated sensitivity”. Lars Ulvenstam described Gunnel Broström in 1955 as a classic prima donna. He was overwhelmed by her presence in the Gothenburg City Theatre production of Tennessee Williams’ Cat on a Hot Tin Roof.

Gunnel Broström died in 2012. She is buried in Bromma cemetery. 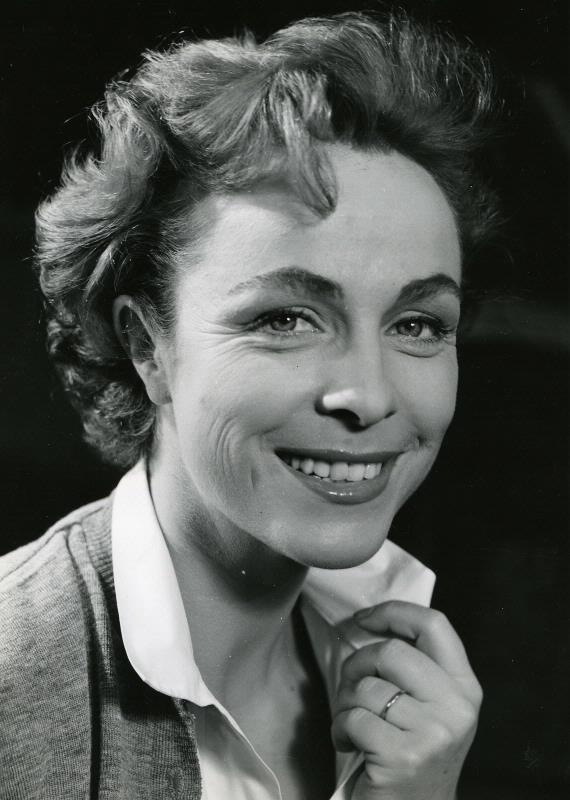