Queen Hedvig Eleonora was the most powerful woman in Sweden during a 60-year period of Sweden’s ‘age of greatness’. She also played a prominent role in the politically significant Caroline stately and courtly cultural developments.

Hedvig Eleonora was born in 1636 and was brought up within one of Northern Europe’s most culturally prominent baroque courts, in which art and learning enjoyed positions of major significance. Her father, Fredrik III of Holstein-Gottorp, was interested in the sciences, amongst other things, and quickly adopted the Copernican view of the world. Her mother, Maria Elisabet of Saxony, was active within the literary sphere and introduced strong cultural traditions from her native court, and these clearly inspired her daughter. Courtly culture was a matter of prestige not just in the eyes of the general population but also amongst other princely houses. It subsequently also formed part of the ducal couple’s political stratagems. Hedvig Eleonora had thus developed an understanding of culture as an implement of power from a young age. The details of her formal education remain unknown to us but it probably included what could be termed cultural skills, such as musicality, as well as religious instruction. Before her journey to Sweden she was taught Swedish history and the state of Swedish foreign affairs.

Holstein-Gottorp’s location on the southern border with Denmark made it a strategically important place for Sweden in its efforts to become master of the Baltic Sea. Hedvig Eleonora’s marriage to Karl X Gustav in 1654 solidified the already close relations between the two states. The following year their son Karl (later King Karl XI) was born. The ensuing period was marked by war with Poland and Denmark and the queen spent some time near the various military theatres. She had already built up a network of information gathering and informal political influence by this point.

King Karl X Gustav died in 1660. His will stipulated that his widow queen was to take charge of the minority government, and that she would have two votes. Although not all the aspects of his will were adhered to Hedvig Eleonora eventually achieved the position which her husband wanted for her and thus took charge of Crown Prince Karl’s upbringing. She was consistently involved in the workings of the minority government and attended council meetings. She did not seek to hold a visibly powerful role which confirmed her clever management of what was expected of a queen at that time, and was not a sign of her lack of interest.

Hedvig Eleonora achieved the primary task of queen mother as regent, namely by maintaining the stability of the kingdom and safeguarding the prince’s position whilst still a minor; at the same time she could informally manoeuvre in favour of his and her own interests. Her very extensive correspondence, in particular, presents a clear image of her views and actions. As both queen and queen mother of an empire she was a great asset to her own dynastic house. Throughout her time in Sweden she actively promoted the house of Holstein-Gottorp, even at times when a conflict of interest meant that she had to place her husband’s and later her son’s interests first. Her correspondence with her brother Duke Christian Albrecht reveals that she advised him in relation to his foreign policy and even provided him with useful information. Hedvig Eleonora’s position also meant that the princely houses which her sisters married now found it easier to gain a hearing. She was also active in other matters. Her involvement in the establishment of Lund university shows how her informal influence could have a practical application: by creating networks she facilitated meetings and persuasive discourse between the driving forces behind the project and representatives of the initially negatively-minded minority government. In 1666 she formally signed the founding documents of the new seat of learning.

During Karl XI’s minority reign Queen Mother Hedvig Eleonora’s work in support of the king’s future position is clearly visible to posterity in the courtly culture which framed the Crown Prince’s upbringing. Here the king’s virtues and societal rank were recurring themes. In 1672 Karl XI assumed the reins of power. Three years later war broke out and serious lacks were revealed in Swedish defences. This resulted, amongst other things, in the 1680 parliamentary resolution on the minority government inquisition. The dispute between the minority government and the council did not involve the queen, however. She retained her son’s trust throughout his life, despite various external attempts at generating suspicion between them. Karl XI married the Danish princess Ulrika Eleonora in 1680. Hedvig Eleonora and her daughter-in-law were politically opposed to eachother; the most intimate of family circles thus became an arena of international diplomacy. Opportunities to influence the royal children became a particularly sensitive issue. Following the death of Queen Ulrika Eleonora in 1693 Hedvig Eleonora was appointed guardian of the Crown Prince by Karl XI in direct affirmation of her competence.

Following the death of King Karl XI in 1697 Hedvig Eleonora once again took charge of the minority government, albeit for a brief period. Karl XII attained his majority that same year. He showed great respect for his grandmother and guaranteed her continued financial security. Connections to the house of Holstein-Gottorp were strengthened through Karl XII’s sister’s Hedvig Sofia’s marriage to Hedvig Eleonora’s nephew, Duke Fredrik IV. Their son Karl Fredrik grew up in Sweden but he had no formal right to the Swedish throne. Despite this he was considered as a potential successor to Karl XII whilst the king remained unmarried. Hedvig Eleonora appears to have taken his side against her third grandchild, Ulrika Eleonora the younger. The uncertain future of the royal dynasty was a moment of worry during the final year of the queen mother’s life, particularly as the kingdom was also beset by famine, the plague, military defeat, and economic crisis. Her final greeting to Karl XII was a prayer that he “would allow himself to make peace” and return to his kingdom.

An extensive and significant sphere of activity for Hedvig Eleonora was the jointure, or the sizable property which comprised her main source of income as queen mother. The jointure, which was set in the marriage contract and had been extended several times, was an independently run area within Sweden and was ruled by the queen mother. In addition she also had her own court and royal stables. She was meticulous in her involvement in the running, the financing, and the recruitment for important posts. Her very significant income was largely used in extensive building developments at the castles she used or owned. Her various activities included Medevi spring which she supported from an early point and owned from 1688 to 1694. Through Medevi she contributed towards the establishment of what became a medically and socially important spring culture in Sweden.

From the time of Karl XI’s birth Hedvig Eleonora made her role as mother her central focus. Significant diplomatic skill was demanded of the minority king’s mother: she had to avoid being accused of inappropriate influence whilst also creating a solid basis for their future relationship – as both her own well-being and any continued role after her son took control of the reins rested on this. According to the contemporary analogy between the household and the kingdom Hedvig Eleonora was also acclaimed as mother of her husband’s, and later her son’s and grandson’s, subjects. Her love and care were declaimed in words and images, but being a prince’s consort and prince’s mother was a profession for which Hedvig Eleonora had trained from an early time.

The view of the queen as a maternal figure for the kingdom and its subjects is closely related to her role as an intercessor, which was reflected in the tribute poems composed for Hedvig Eleonora. Religion played a major part in her life, from the grand ceremonies such as coronations and funerals to religious services, individual pious living, and the raising of the royal children. She had grown up within the context of a Lutheran reading culture which in her family circle was largely shouldered by the women, and religious literature was the dominant feature of her library. She funded the publication of several works but also interceded against those she did not like – she forbad a catechism in which women were described as men’s property. She donated embellishments and liturgical items to a large number of churches which she often had marked up with a very visible monogram – HERS – so the donor was obvious.

Her active engagement and skill allowed Hedvig Eleonora to also succeed in the politically important role as the ruling builder of the Swedish empire and made the court the country’s leading cultural space. Thus she contributed to how Sweden was perceived abroad as well as to creating and supporting the hierarchy of absolutism. In addition to her own projects – mainly Drottningholm, Strömsholm, and Ulriksdal – she had a significant influence on royal building projects. As Karl XII’s guardian she participated in the decision to rebuild Stockholm castle after the 1697 fire and was an active member of the committee which studied the architectural plans. Hedvig Eleonora employed many prominent artists and craftsmen within a variety of professions but the two most important people with regard to her environment were court painter David Klöcker Ehrenstrahl and the architects Nicodemus Tessin, the elder and the younger.

Her extensive art collection included many family portraits, depicting her ancestry and family connections. Drottningholm was the most important of her castles with regard to representation. The site still provides clear evidence of how Hedvig Eleonora wanted to appear in the eyes of her contemporaries and to posterity, as a consort, pious grieving widow, regent, mother, and educator and master builder and patron of the arts. What is less apparent today is the more ethereal but indispensable elements of theatre and other performed arts, poetry and music. Hedvig Eleonora supported the travelling theatre troupes which visited Sweden and also used their various productions as pedagogical tools in her son’s education. At ceremonies and festivities such as masquerade balls and tournaments the royal family and the artistry of the court contributed towards the overwhelming luxury that was the trademark of baroque courtly culture.

Hedvig Eleonora died in November 1715. She is buried in the Riddarholm church in Stockholm. 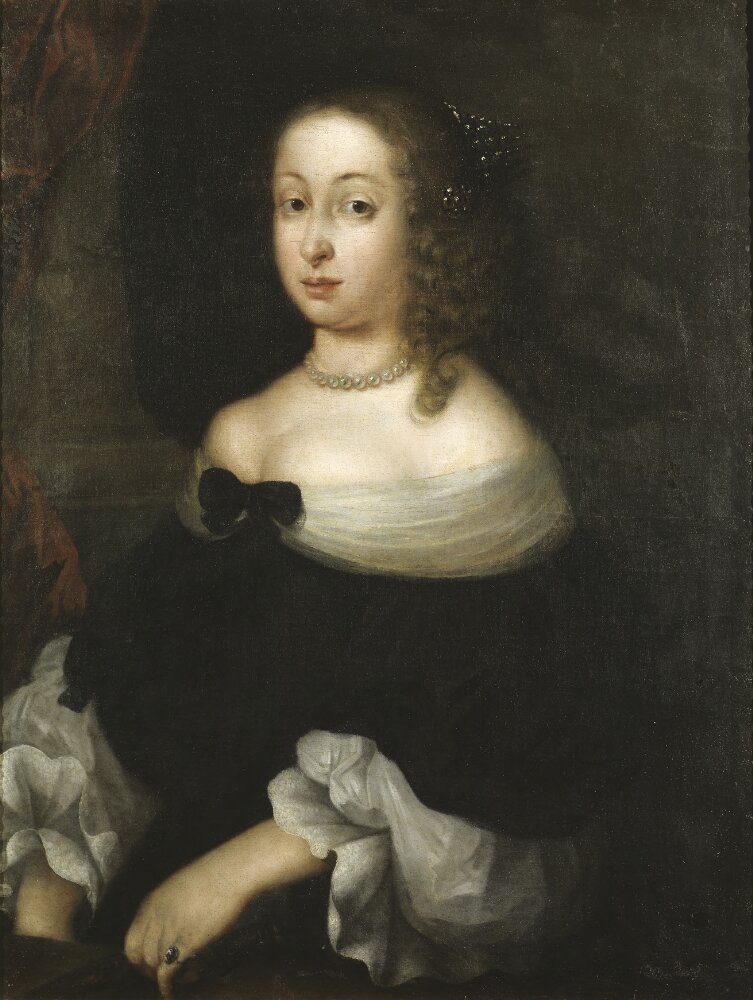