Hedvig Elisabet Charlotta (frequently Charlotte) is known as a diarist, a politically active duchess and Queen of Sweden.

Hedvig Elisabet Charlotta was born a princess of the small German principality of Eutin in 1759, to Ulrike Friedrike Vilhelmine of Hessen-Cassels and Prince-Bishop Freidrich August (who became Duke of Oldenburg in 1773). She was the only daughter to survive into adulthood. She had an older brother, Peter Friedrich Wilhelm, who suffered from mental health problems. On the passing of her father, this resulted in the duchy and title of Duke being inherited by a cousin of hers.

Hedvig Elisabet Charlotta received an education befitting of her social standing and sex. It was intended to enable her to comport herself appropriately within sophisticated social circles and to make her a suitable match for marriage. She gained her education from a French governess, making her bilingual from an early age. The subjects she studied were religion, French literature and spelling, Italian, history, drawing, music, and presumably also dancing. She learned Swedish as a teenager.

When she was 14 years old she became engaged to her cousin Duke Carl of Södermanland, who was the younger brother of King Gustaf III of Sweden. This union, which was a humble one from a Swedish perspective, probably reflected Gustaf III’s wishes not to threaten the power balance between the couples in the Swedish royal family. On her journey from Germany to Stockholm Hedvig Elisabet Charlotta became acquainted with Sophie von Fersen, later married as Piper. The relationship with Sophie von Fersen and her family came to influence Hedvig Elisabet Charlotta’s personal and political life.

The ducal couple’s first year spent together in Sweden was coloured by a lively courtly social life on the one hand and an unfulfilled desire to have children on the other. It was at this time that Hedvig Elisabet Charlotta began to keep what would become her famous political journal in the form of her monthly letters to Sophie von Fersen. It was eventually published as Hedvig Elisabeth Charlottas dagbok as nine volumes over the period 1902-1942. In 1800 Hedvig Elisabet Charlotta ceased writing to Sophie after their relationship had suffered a major crisis. She replaced the correspondence with more spontaneous and more introspective diary-like notes. In terms of content the journal took a turn from youthful light-hearted annotations on political events, courtly life and personal portraits into a detailed analysis of the political developments in Sweden and abroad.

The political differences between King Gustaf III and the Swedish nobility had intensified during the 1780s. Sophie von Fersen’s father, Axel the Elder, was a leading figure in these developments. During Sweden’s war with Russia and the parliaments of 1786 and 1789 Hedvig Elisabet Charlotta sided with the von Fersen family in opposition to her own brother-in-law. From 1789—1792 she and her sister-in-law Sofia Albertina headed up a faction of the nobility against King Gustaf III in response to his brutal measures during the parliaments. Hedvig Elisabet Charlotta also planned to cooperate with Gustaf Adolf Reuterholm in an effort to revoke the Union and Security act largely in order to pose a threat to King Gustaf III’s authority. However, lacking the support of Duke Carl they were never able to enact the coup.

Hedvig Elisabet Charlotta became the first lady of the realm following the death of Gustaf III as her husband gained the post of regent on behalf of Prince Gustaf IV Adolf, then a minor. She initially served as a sounding-board for her husband Carl and the aforementioned Reuterholm, but was opposed to their increasingly despotic approach to governing after the Armfelt plot of 1794. The differences in views caused a marital rift between Hedvig Elisabet Charlotta and her husband and between Sophie von Fersen and Hedvig Elisabet Charlotta as their respective networks fell into opposing camps. By the end of the regency, however, the ducal couple’s marital relations had improved, through the shared experience of having — and losing — two children. On 2 July 1797 Hedvig Elisabet Charlotta gave birth to a stillborn daughter and on 3 July 1798 she had a son who only survived a week. Shortly thereafter the ducal couple undertook a lengthy journey through Germany to Vienna, where they spent the winter. They had to cancel their planned onward travel to Italy due to the Napoleonic campaigns.

The couple returned to Sweden in the autumn of 1799. Their long journey had satisfied their substantial hunger for knowledge and had opened up a personal space for them within the sophisticated Continental circles. On their return they transferred their artistic and cultural acquisitions by renovating their Rosersberg property in Märsta, where they increasingly spent their time. The reason for this may have been their relationship to King Gustav IV Adolf. In 1803 the king had ensured that the ducal couple’s secret society called Gula Rosen (the Yellow Rose) was disbanded and he had interrogated his paternal aunt and uncle, suspecting them of conspiracy. The so-called Bohemian affair resulted in Hedvig Elisabet Charlotta destroying a large part of her papers by burning them. However, following the removal of King Gustav IV Adolf in 1809 the couple defended the usurped king against the political faction which sought to prevent absolute royal power by instituting constitutional reform. Duke Carl was placed on the throne as King Karl XIII, once he had promised that he would enact the new reformed law. Despite his promise to do so he also tried to enact a coup in the autumn of 1809. It never came to pass, however, as he fell ill. The royal couple, along with the sibling pair of Axel von Fersen the younger and Sophie von Fersen, amongst others, also sought to re-establish the Gustavian dynasty by having Carl and Hedvig Elisabet Charlotta adopt the eldest son of Gustaf IV Adolf, also named Gustaf. These compromising activities contributed to a campaign of hate directed at the von Fersen siblings, eventually resulting in the brutal murder of Axel von Fersen the younger in June 1810. Hedvig Elisabet Charlotta felt responsible as it was the close relationship that existed between them which partially motivated this hate campaign. It appears that von Fersen the younger’s murder served as the final nail in the coffin for Hedvig Elisabet Charlotta’s political ambitions.

Hedvig Elisabet Charlotta’s political significance through her position as duchess and queen can be interpreted in several ways. As a verbose political writer of many years standing she served as an interpreter of political developments and personalities. This has led to frequent assumptions by later generations that her interpretations were also those of the general public. She fulfilled a politically important role of active hostess. For example, she played the part of patron by delegating and proposing individuals for positions at the royal court, and for marriages within the highest social circles. Hedvig Elisabet Charlotta also played a key part in the supply of information which primed political initiatives and connected the Swedish court with foreign states. She served as mentor and advisor to formal power-holders. On recurring occasions she laid the ground for political developments which, however, did come to pass or have not become known to posterity (due to the removal of all traces of her involvement).

Hedvig Elisabet Charlotta was a defender of the traditional values of courtly society, believing in a strong monarchy, weak political institutions, and clearly demarcated social boundaries. In her view the king and his family were to serve as role models of the patriarchy whilst the oligarchy of nobles merely assisted in governing. Although this political perspective was shared by the upper social circles of the second half of the 1700s by the time of the 1809 coronation it was considered to be overly conservative and even obsolete by some political factions. The selection of the commoner Marshal Jean Baptiste Bernadotte for the Swedish throne directly contravened her political views, which were coloured by an intense hatred of Napoleon. Further, it ruined her hopes of being able to carry out her political aspirations through her husband’s nephew, Prince Gustaf. The traces of these turbulent years around 1810 seem to have been cleverly removed and Hedvig Elisabet Charlotta quickly changed her attitude towards her adopted son, Carl Johan. Whether this was due to personal affection or was simply calculated behaviour remains hard to determine. Hedvig Elisabet Charlotta was widowed in February 1818 and died herself in June that same year.

Hedvig Elisabet Charlotta left a sizable archive behind which is currently divided up into different collections within Riksarkivet (the Swedish National Archives). The majority of the primary source material is in French. She herself considered her journal to be the most valuable element of her written output to be saved for posterity. She sought to create an image of herself as an observer of current events whilst toning down her own involvement in the same events. These aspects can instead be found in her letters. Her daily life and her relations with her servants can be reconstructed through book catalogues and contemporary financial accounts. A very large collection of letters to Sophie von Fersen survive up to 1800, after which the correspondence thins out. There are hardly any letters written in Hedvig Elisabet Charlotta’s hand which cover the turbulent period of 1807—1814. The primary source for her period as queen is the large collection of letters written to her sister-in-law Sofia Albertina, which date from 1814—1817. 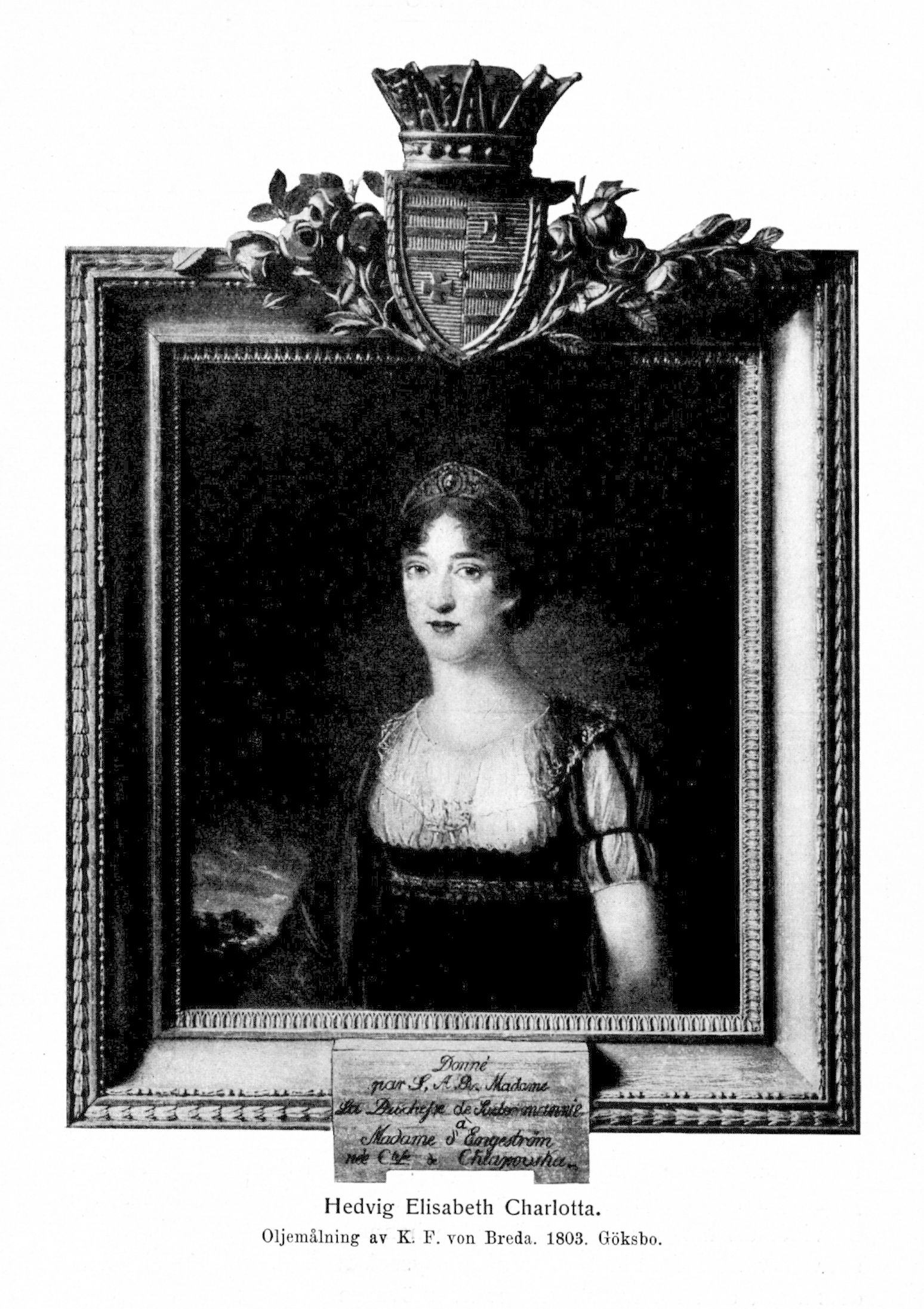