Hedvig Ulrika (Hedda) De la Gardie is known for being the wife of King Gustav III’s favourite, Gustaf Mauritz Armfelt. She was one of the most politically influential women of her time.

Hedvig Ulrika De la Gardie was born in Stockholm in 1761. Both of her parents belonged to the most eminent noble families in Sweden and, like many of their relatives, held top-rank positions at the court. Hedvig Ulrika De la Gardie was thus, from birth, well-acquainted with the personalities and the traditions of the Swedish court. When she was four years old her maternal aunt, Hedvig Sofia Stenbock, became responsible for her upbringing. Her aunt was a lady-of-the-bedchamber for Queen Sofia Magdalena, who in 1778 was given the prestigious duty of taking charge of Crown Prince Gustav Adolf’s initial education and care. Hedvig Sofia Stenbock also arranged for her niece, Hedvig Ulrika De la Gardie, to be appointed lady-in-waiting to the Crown Prince at this time.

Little is known of Hedvig Ulrika De la Gardie’s childhood, but her letters attest to her receiving what at that time was the normal upbringing for young noble girls, where greater emphasis was placed on conformity than on learning. Aristocratic girls were prepared for their future roles in running sizable households with extensive hospitality duties and for holding court positions in the service of female members of the royal family. Apart from learning to count and to write in Swedish, a girl’s education comprised lessons in religious education, letter-writing, French, music, handicrafts, drawing, and dance.

Hedvig De la Gardie’s marriage to Gustaf Mauritz Armfelt was arranged in 1785 at the request of King Gustav III. The king wanted a wife of noble descent for his favourite, Armfelt, in order that she could make up for Armfelt’s lacking noble credentials. The splendid wedding party held at Drottningholm castle was the main court attraction of that summer. In conjunction with the wedding Hedvig Ulrika De la Gardie was appointed lady-of-the-bedchamber to Queen Sophia Magdalena, and this gave her the right to live at the castle and to have a permanent income. Gustav III had an apartment, which was directly connected to his own chambers, refurbished at the castle for the young couple. In the ensuing years the Armfelts’ apartment was regularly used for the king’s exclusive socialising. Gusaf Mauritz Armfelt remained Gustav III’s right-hand man in all matters regarding politics and matters of the court.

During Duke Carl’s minority government of 1792-1796 Swedish politics undertook a new direction. This made Gustaf Mauritz Armfelt’s position as a royal favourite untenable and brought an end to his career at the Swedish court. He and his family were dispatched to Naples where Armfelt served as the Swedish minister. During the 1793-1794 the minority government launched a comprehensive political plot focused on Baron Gusaf Mauritz Armfelt known as the so-called ‘Armfeltska sammansvärjning’ (Armfelt plot). Gustaf Adolf Reuterholm went in search of and discovered compromising correspondence between Armfelt, his lover Magdalena Rudenschöld, and their mutual friends at the Stockholm court. The letters contained criticism of the government and comprehensive plans for a coup. The intention was to overthrown the minority government with help from Russia and to convince the teenaged Gustav IV Adolf to assume formal control of the Crown before he attained the age of majority, guided by a government with Armfelt in charge.

During her time in Kaluga Hedvig Ulrika De la Gardie devoted herself fully to reinstating her husband’s name and to saving him from economic ruin. Their hopes lay in Gustav IV Adolf’s accession to the Swedish throne in 1796. In the spring of 1797 Hedvig Ulrika De la Gardie travelled alone to Sweden in order to seek a pardon on behalf of her husband and to put the family accounts in order. She was not able to obtain immediate permission for the family to return to Sweden, but Armfelt was allowed to leave Russia and all active pursuit of him ceased. In the summer of 1798 the Armfelt couple reunited and spent several years at various health resorts in Germany. They began to cautiously re-initiate contacts with travelling members of the Swedish court.

Gustaf Mauritz Armfelt was wanton and impulsive with regard to his personal relationships, money and political promises. Hedvig Ulrika De la Gardie’s task was to mediate and forestall her husband’s actions, which was just as much of a necessity as love affairs were according to the conventions and living conditions of the era. Through her good judgement and the contacts which she cultivated and used to her advantage she was able to negotiate on her husband’s behalf and eventually reinstate the family’s honour and save them financially. Her counter-manoeuvres at the Swedish court, particularly with her cousins Axel and Sophie von Fersen and their friend Baron Evert Taube, paved the way for Armfelt’s political rehabilitation. There is an interesting series of letters between Hedvig and Sophie which survives in the Löfstad archive in which Hedvig discusses the political situation of the 1790s and lays out her strategy for her actions.

Gustaf Mauritz Armfelt’s pardon was delayed due to the king’s awareness that it could be taken as a failure of the minority government’s authority. Gustav IV Adolf’s relationship with his uncle Duke Carl was already fraught and the king presumably wanted to avoid making things worse between them. The birth of Crown Prince Gustav in November 1799 became Gustav IV Adolf’s chosen moment to formally pardon his father’s best friend. Hedvig Ulrika De la Gardie was appointed as Crown Prince’s Court Mistress (ie Mistress of the Robes) at the same time.

Hedvig Ulrika De la Gardie only held her position as Court Mistress for a brief time: she was dismissed in 1803. Although it was traditional that once the Crown Prince had survived his early years, responsibility for his upbringing passed to a male guardian, Hedvig Ulrika De la Gardie was not, however, allowed to retain any court privileges, including her living quarters at the castle or free board. She herself believed that the reason for this lay in her favourable standing amongst the older generation at the Gustavian court. She also found the efforts of Queen Fredrika, who was 20 years her junior, to establish herself as royal consort and mother in a foreign court to be quiet awkward. Upon her dismissal Hedvig Ulrika De la Gardie convinced six doctors and male guardians to complete a detailed account which proved that the Crown Prince was in good health when he was transferred into new guardianship. Thus she safeguarded herself from future allegations of mistreatment against the young prince. Experience had taught her to tread carefully with royal favour.

Gustaf Mauritz Armfelt was appointed Swedish envoy to Berlin in 1802, and he was in command of Swedish forces during the Pomeranian war of 1805-1807. In political-ideological terms Hedvig Ulrika De la Gardie and her husband remained representatives of the conservative faction of her era. The couple socialised with European monarchist counter-revolutionary circles. They were opposed to the liberal tendencies emerging at the time and felt a burning hatred towards Napoleon. Although these views aligned them with King Gustav III and King Gustav IV Adolf, they also became political burdens following the 1809 revolution when the king was deposed. Crown Prince Karl Johan was unhappy with the presence of such strong supporters of the old regime. Gustaf Mauritz Armfelt was expelled from Sweden in 1811 following accusations of having conspired against the government. He then entered into Russian service and became a useful resource for the Russian emperor with regard to the integration of Finland into the grand duchy. Hedvig Ulrika De la Gardie spent the final years of her life in Stockholm, where she died in 1832. 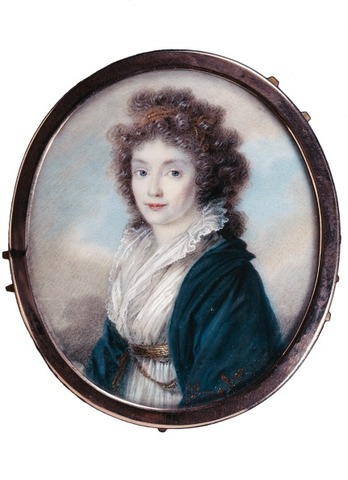